Imagine you are a songwriter. You want to pitch a song to Hillsong Music. So you get the best demo recording you can afford, right?

Wrong. Your MP3 won’t get listened to. At least not by two of the key gatekeepers who determine what Hillsong sings. They wouldn’t give you a listen even if you are one of Hillsong’s best-known songwriters.

“We check the lyrics,” says Hillsong’s Amanda Fergusson. “We insist that we don’t want it sent in an MP3 format. It’s very easy when you listen to a song and hear the flow to think it’s great. But we want to be completely focused on the message, and its clarity.”

Hillsong is Australia’s best-known Christian export. Ask your better travelled friends and relatives and you will dig up stories like these from the small Eternity team: walking into a black church in the Chicago slums and hearing Hillsong, or of familiar tunes in the African jungle.

The music is famous, but the Hillsong system behind it has been unpublicised until now. All the songs produced – both the quality of the lyrics, and the music are subject to an elaborate quality control system. Robert Fergusson, a senior associate pastor at Hillsong Church and his wife Amanda, also a teaching pastor at Hillsong, have all new songs written at Hillsong submitted to them by the song writers for their approval. “This process brings out excellence,” says Robert, “and that’s ultimately what we’re looking for. My feeling is that excellence glorifies an excellent God. If our challenging a single word or questioning a sentence refines it, well then we’ve done a good job.”

Amanda adds: “I think what we do is quite unusual. We talk to ministers in other churches as well as many song writers, and this idea of submitting your lyrics for checking is quite confronting and very unusual. But people like the idea.” 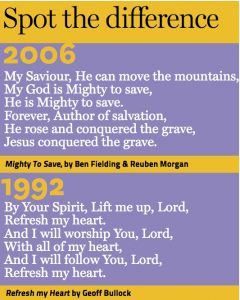 “We’re looking for good theology,” says Amanda. “Three things we primarily examine in new songs are theology, clarity and journey: where does the song take you?”

“Obviously if there’s heresy it’s not allowed; but even if what’s written is ambiguous, we question it. Sometimes we say to the songwriter, ‘You haven’t actually said anything wrong, but it could be misinterpreted’.”

This means a lot of emails, phone calls, conversations between Robert and Amanda and the songwriters. Amanda says policing the lyrics has paid off, “I think that it’s really helped us … when I look at the lyrics from our early albums before any kind of checking happened.” Amanda’s candid comment reflects the experience of of Geoff Bullock, a founder of Hillsong Music Australia in 1983 and worship pastor until 1995.

After leaving Hillsong Bullock became critical of the lyrics he had written while at Hillsong. Bullock’s subsequent life-changing experience of ‘grace discovering him’ led to an acknowledgment that his earlier music contributed to a “worship works” theology, according to Mark Evans (The Briefing, 1999) who wrote his doctorate on Hillsong music. Bullock reflects that his earlier music, “looked at God, looked at me and tried to reconcile [the two] through my actions: ‘I will lift my voice’, ‘I will worship’, ‘I will sing’, ‘I will bow down’, ‘I will not let go’, ‘I will hold on’, ‘I surrender’ – all the stuff that I will do… then suddenly everything I wanted to write about was what God had done, not about what I will or would do.”

“The congregation has to sing too; you mustn’t make them lie,” says Amanda Fergusson. “We’re really wary of statements that begin ‘I promise…’ because you’re actually getting them to make a vow they may not be able to keep. That might be where the songwriter is in their personal journey, but is this something the congregation can sing? Is it fair to ask the congregation to sing that?”

The Fergussons have been involved in assessing song lyrics for as many as ten years, although the process is constantly being improved. Last year was no exception.

Robert observes, “It’s a huge act of trust and submission, for someone who writes international award winning songs to submit their songs to us … it’s a great act of humility. I’m constantly honouring people like Darlene Zschech and Reuben Morgan who are happy to do this.”

“We have a huge responsibility: we have to make sure that people sing the truth,” says Robert. “Sometimes we may get it wrong, but at the same time our heart is to do it as well as we can.”

Robert warns song writers about their responsibility, asking, “Who can quote to me one line from John and Charles Wesley’s sermons? I think John Wesley wrote 40,000 sermons. Not one of them can quote a line. [I can—Eternity editor]. And then I say to them, now who can quote a line from one of Charles Wesley’s hymns? Usually, a number of people can quote exact lines from something that was written 200 years ago. That is the power of song. And if we don’t recognise that, we’re going to misuse it.”

Robert says that monitoring the content of the lyrics and the teaching contained in them is something the whole leadership team is involved in. “Sometimes our senior pastor Brian Housten will say, ‘hang on, we haven’t had any songs about the cross lately…’ When we feel that there’s a gap we’ll challenge the song writers.”

Directly quoting from the Bible won’t get a song a free pass. One song writer was surprised when the Fergussons objected to the use of a direct Bible quote in her song, only to be told by Robert, “Because you’ve taken that line out of context and put it in another, it is ambiguous. You’ve shown me the verse, yes, but now you need to read the chapter it’s in.”

The quality control system means that rather than being the product of a disparate group of songwriters, Hillsong songs present its own theological stance. “In our ‘world’,” says Robert, “we actually believe that you can have an encounter with God through a worship experience. Now, not all churches believe that. But we take people on that journey. We’re revealing truth in a song, allowing people to encounter God in the song.”

But in common with many songwriters who might have a different emphasis, Hillsong wants to be Bible-based. “If the words are actually from Scripture, it will lead them back to the Word of God where they’re going to receive faith and have Jesus revealed to them,” says Robert. “Ultimately, that’s what we want. A song has got to have the undergirding of Scripture.”

Robert and Amanda will readily respond to emails that challenge the theology of Hillsong lyrics. Robert says, “We all have a theological stance. If you look at our statement of faith, it’s a fairly standard orthodox, evangelical statement of faith. But we have an emphasis that other churches may not; and this will always be the case.

“We tend to get good responses. The majority of people who question us appreciate our response and that we’ve got an opinion, that we’ve thought it through, that we’re consistently endeavouring to base our lyrics in Scripture. They write to say that they still don’t agree, but appreciate the process, and that’s fine. And we also request: please don’t sing our songs if you’re going to change the lyrics!”

“This process is an acknowledgement of unity and diversity,” says Robert. “People will always find fault. But our heart is, can I show you the truth in this song from Scripture? If I can do it, then we can declare it.”

This morning Eternity gives you a Psalm of encouragement, and reports on where we went…

How to livestream your church service

How to livestream your church service

With links to ‘my geeky brother’s write-up’