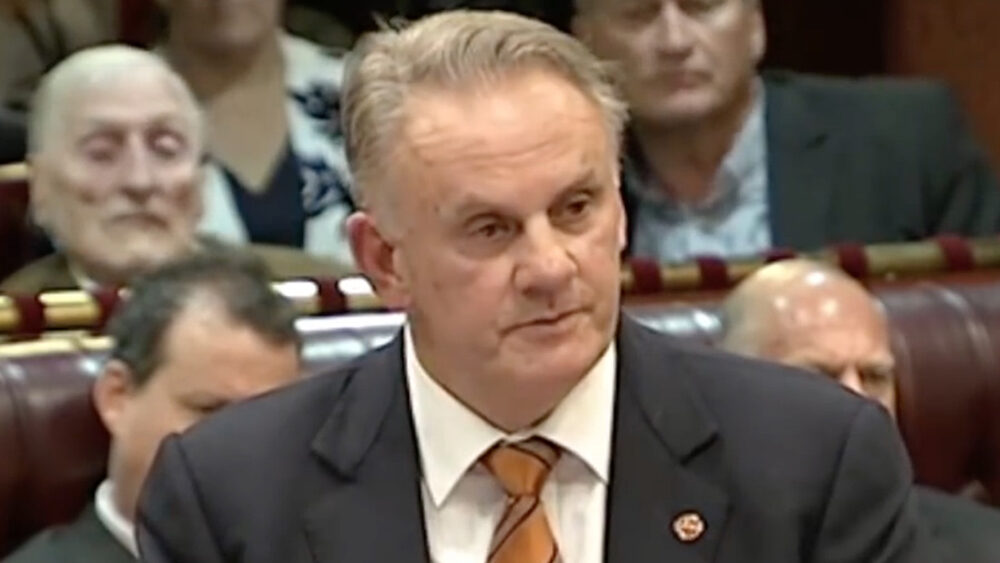 Mark Latham, once the Federal leader of the Labor Party, and now a One Nation representative in the NSW upper house, is getting a lot of attention from conservative Christians.

All the other states, except SA, have some protections for religion.

“We have all seen the high-profile cases of Israel Folau and Margaret Court, outstanding Australians treated like second-class citizens because they take a literal interpretation of the Bible — the most important, influential and popular book in history; the book that has given civil society much of its moral code, our understanding of right and wrong.

“The book that stands today as one of the essential pillars of Western civilisation.

“Those who quote from the Bible should not be hounded from the public square as Folau and Mrs Court have been. All religious faith that respects the sanctity of life and the goodness of the human soul and reaches out to others with the hope of salvation and compassion should be honoured in our society.”

Speeches like this reveal that Latham, although not a Christian, is reaching out to a Christian constituency.

For 39 years Fred Nile, the longest serving member of the NSW Legislative Council, might have been expected to lead the charge on this sort of bill. But he will turn 84 this year and leads a party – the Christian Democrats (CDP) – which has seen a steady decline in its vote, a split on the board, and the resignation of its widely respected President, Ross Clifford (who is principal of the Baptist Morling College).

It may well be that Mark Latham and One Nation sees there are significant votes to capture from the Christian conservative space, and they have calculated that Nile will retire and the CDP is not the force it once was.

Greg Bondar, NSW Director of Family Voice Australia – a conservative Christian campaigning group – is a seasoned political campaigner. “I spoke at length to Mark about this,” he tells Eternity, “and he did give us a pretty strong indication in our [Family Voice] webinar that there was bi-partisan support for his Bill.

“In my view, yes, the bill will pass as we are also lobbying for this and have made a submission to the Committee.”

The NSW Government has agreed to have a joint select committee to examine the Latham bill – a process Bondar believes will take a few months.

“Fred’s role in the future CDP will determine if Mark can become the ‘new’ Fred Nile,” says Bondar. “[It’s] not a secret but many have moved their support to Mark, away from splinter and supposedly Christian-based parties. Keep an eye out for the Australian Federation Party who are claiming to be ‘conservative’ with a Christian leaning.”

Eternity can confirm that former CDP supporters have switched to One Nation, including a prominent former candidate.

There has also been a movement of former supporters of parties, including Family First/Australian Conservatives, Rise Up Australia and Australian Christians, to the Liberal Party in several states (in particular, NSW and Victoria).

One Nation was founded by Pauline Hanson after she was deselected as a candidate by the Liberal Party for advocating the abolition of special government assistance for Indigenous Australians. She has emerged as a destination for conservative Christians after the micro-party route to the senate was removed when the senate voting system was changed. (Voters now have to vote for at least six parties when voting “above the line” – this has meant that micro parties cannot manipulate preferences.)

The Australian Christian Lobby (ACL) has welcomed the Latham bill – and the setting up of the Joint Parliamentary Committee. The ACL raised eyebrows within the Coalition when its ‘Christian Values’ hand-out at the last election was seen to favour One Nation over the Coalition Parties. 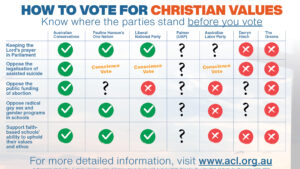 “People of faith need protections in NSW law that are equal to protections against other forms of discrimination. Mr Latham’s bill would ensure that an Israel Folau, or anyone else, does not get sacked for an Instagram post.”

Latham also has been campaigning on other issues, such as ‘Safe Schools’, or against drag queen readings in libraries, and against identity politics. These are issues which resonate with the Fred Nile base.

ACL and Family Voice have not specifically endorsed One Nation – despite ACL’s ‘Christian Values’ card, and Family Voice hosting a Latham webinar recently. But it is clear that conservative Christians, who prioritise traditional moral issues when choosing how to vote, are kicking the tires of One Nation.

As for One Nation the party, Bondar is more cautious. While planning to meet Pauline Hanson, Bondar says: “Policies will dictate the level of support from churches, organisations and individuals.”

A legal academic who has analysed the Latham Bill told Eternity that it includes strong protections for local government decisions. This would protect, for example, decisions to refuse Mosques – which may be the motivation for that section. If so, this gives the bill a One Nation flavour.

“I got really, really angry. I had to do something!”

Update 2pm It’s business as usual, says the Christian Democrats. The board is still in…

UPDATE: The motions of no confidence were voted down at the state council meeting. The…