Centenarian surprised to be remembered at last

Former journalist Helen Caterer thought  her achievements had been forgotten until received a call saying she had won a Medal (OAM) of the Order of Australia in the Queen’s Birthday Honours for service to the community, especially through church and social welfare groups.

“I thought the world had passed me by. All the public things were so long ago,” says Caterer, now 102.

The last time she received any recognition was an MBE in 1966 for reviving the Sunday Mail Blanket Appeal, which was originally started by The News and The Mail in 1933 during the Great Depression.

In the late 1950s Caterer saw a photo of two little boys sleeping under sacks in a tin shed and was spurred into asking her editor, Ken Parish, to run an appeal to provide blankets for distribution to needy families. The appeal is still going. 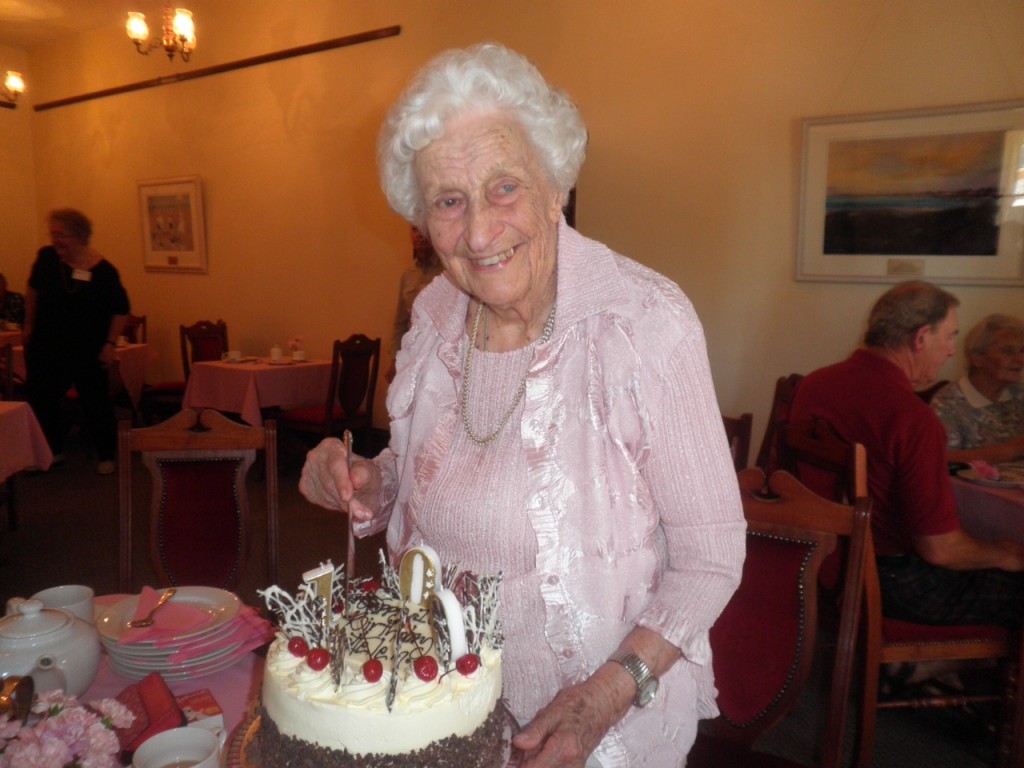 Helen Caterer on her 100th birthday.

In the 60s, she developed the Supporting Mothers Association – an annual Christmas appeal to help mothers buy Christmas presents.

“Nobody will own up to being the person who suggested this (award),” she tells Eternity.

A member of Trinity Church, Adelaide, for 60 years, Caterer says the highlight of her life was being a press observer in 1966 at the World Congress on Evangelism in Berlin.

“There were 1200 people from 120 different countries there. It was just wonderful. You had addresses from leaders all over the Western world. Billy Graham was there and I interviewed him too.

“Some of the press people came with a very critical outlook but I think they were all converted by the time they left!”

She also remembers being driven to a picnic in the Barossa Valley by a then young Rupert Murdoch.

“All I can remember is that he drove very fast!”

Charities advocate  and Bible Society Australia board member Anne Robinson has been recognised for her service to the charity sector in the Queen’s Birthday Honours list today.

Robinson, a former chair of World Vision Australia, principal and founder of Prolegis Lawyers, and co-author of Driven by Purpose, was awarded an AM (Member in the General Division of the Order of Australia).

Robinson received her award for: “significant service to the community through regulatory and governance reform in the not-for-profit and charitable sectors, and to the law.”

She is the founder and principal of Prolegis Lawyers, provider of legal services to the not-for-profit sector. She has advised on corporate law, governance, charitable trust structuring and tax issues for the whole range of Australia’s charitable institutions.

In 2012 with Dr Stephen Judd and Felicity Errington, Robinson wrote Driven by Purpose: Charities that make the difference, runner-up in the Australian Christian Book of the Year awards, 2013. The book challenges charities and not-for-profits to face up to a crisis of identity that can lead to a loss of focus, direction and effectiveness. It also offers practical information of forming and running not -for-profit organisations.

Other prominent Christians honoured in today’s list include NSW Police Commissioner Andrew Scipione, who has been an overtly Christian leader of the NSW police force for almost a decade.

He becomes an Officer of the Order of Australia (AM) for distinguished service to law enforcement through advancing the professionalism of policing and leadership of international investigations and counter-terrorism activities.

Scipione came to Australia from England with his family in 1959 as Ten Pound Poms. After losing his father at the age of 14, he joined a church in southwest Sydney where he met his wife, Joy, and came under the mentorship of Christian men who taught him how to be a husband and father. He and Joy have three children.

Still a teenager, he joined Customs where he played a small part in the investigation of a drug-smuggling operation that has featured in three royal commissions, including that of James Wood into corruption in the NSW Police Force.

“I got to value the importance of honesty because I worked with some pretty dishonest people,” Scipione told The Australian newspaper.

Christians honoured with OAMs today include:

Stewart David Hill, principal of Emmanuel College in the University of Queensland and formerly Warden of Ridley College and Dean of Trinity College, The University of Melbourne for service to tertiary education and to the community.

Reverend Peter Robert Rose, for service to the community through chaplaincy and Christian support roles. He has just retired as parliamentary chaplain in Canberra.

Jonathan Robert Ferguson for service to the Uniting Church in Australia, and to the community.

Reverend Dr Robert Charles Gallacher for service to the Uniting Church in Australia, and to religious art education.