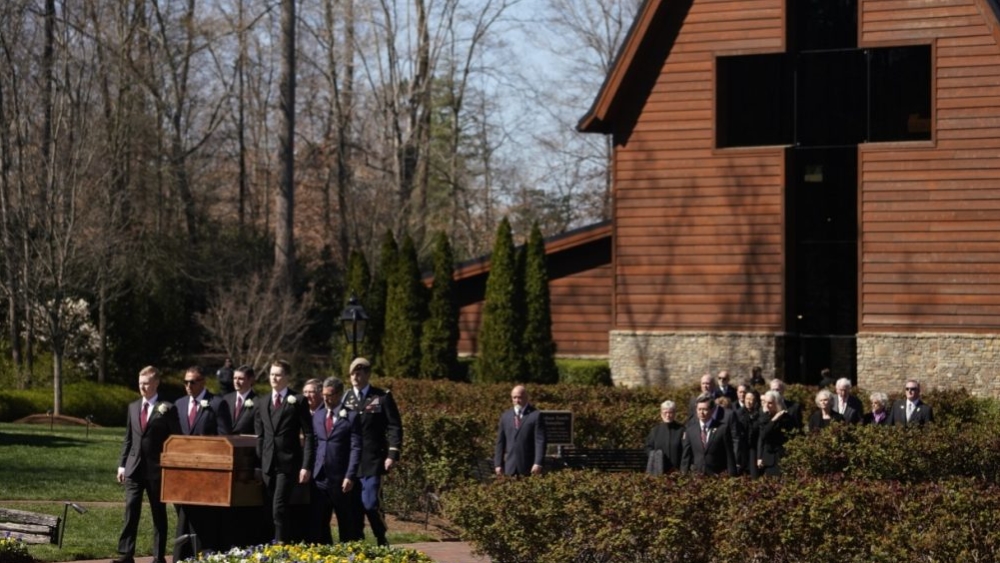 An Aussie tribute to America’s pastor

Under clear skies but feeling the icy blast of freezing winds we gathered in a crowd of 2300 people for the privilege of attending the funeral of Billy Graham. This was held in a large marquee in the car park of the Billy Graham Library in Charlotte, his hometown. The marquee had no sides so that the backdrop to the whole service were two buildings – on the left, the original family home where Billy Graham and his siblings grew up and on the right the Library, which shows the interactive story of Billy Graham and his ministry.

Echoing the theme of his ministry, the library does not so much celebrate Billy Graham as communicate the gospel message of Jesus. Here are the two parts of Billy Graham’s life – his humble beginning as a farm boy from North Carolina to a world-renowned evangelist referred to as “the pastor to America”.

The influence of Billy Graham and the respect with which he is held by the community and the church was reflected in who attended this service. At the political level, President Donald Trump and Vice- President Mike Pence and their wives were there. Neither addressed the crowd, but rather were there to show their respect. Other leaders such as Sarah Palin, former New York mayor Rudy Giuliani and the current Secretary for Housing, Ben Carson, were part of the crowd. Brian Houston was one of the well-known Christian leaders and pastors there. Others included Louie Giglio, Stephen Furtick, Jack Graham, Greg Laurie and Joel Osteen. Many Christian leaders travelled from across the globe to make a statement of the importance of Billy Graham’s ministry.

The service was a testament to his influence not just on the world but on his family – those who meant most to him. Giving wonderful eulogies and reflections of the life of Billy Graham as a brother and father were his sister Jean Ford and all of his children. The reminiscences included his love for Scripture passed on to his daughter, Anne Graham-Lotz, along with his love for them as people, reflected in the moving story of his daughter, Ruth. She told of returning to the family home after a second failed marriage, ashamed and broken. After a two-day drive, her dad met her at the car, wrapped his arms around her and welcomed her home.

The funeral was not just seen by the 2300 people who attended but was beamed to the world. The media presence was enormous and the service was broadcast live by several networks across America, while many other nations carried the coverage as well. This is a reminder that, even in times of a growing secular culture and cynicism about Christian faith and the church, people of unblemished character, humility, selfless service and clear conviction still warrant attention and respect.

Billy Graham was one of those people. It is a privilege for all of us in this generation to have experienced his remarkable ministry. No service of celebration was ever going to truly reflect the greatness of what he achieved, but this gathering was a wonderful attempt.

Lord, thank you for the life and ministry of Billy Graham.

Or ‘Guess who’s not coming to dinner?’

Jesus the Game Changer, a video series hosted by Aussie Baptist Karl Faase, is the…