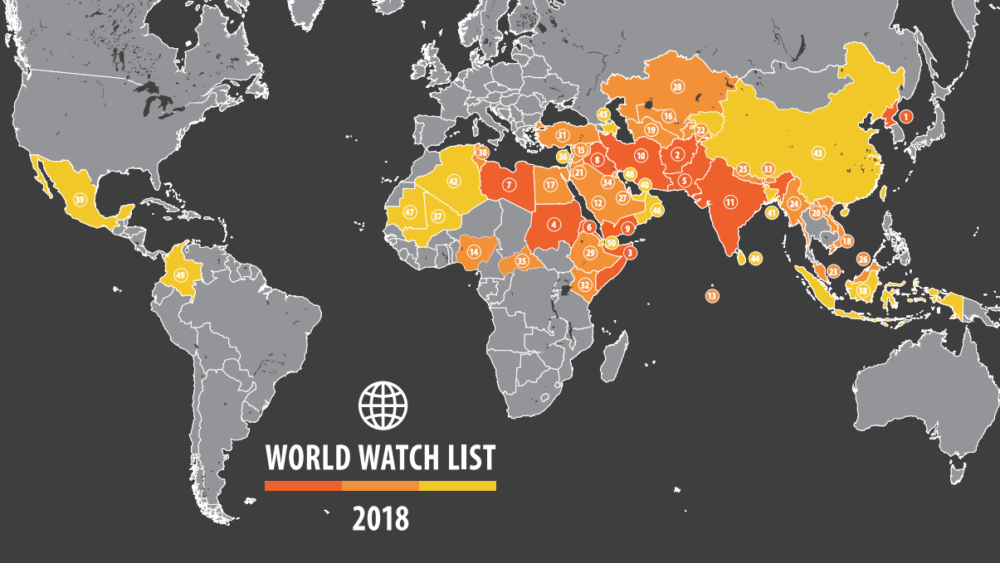 India and Syria also see big changes to their persecution profiles this year. For worse and for better.

Afghanistan is rivalling North Korea as the most dangerous country for Christians in 2018, according to the World Watch List released today.

The top ten most dangerous places to be a Christian in 2018 are:

During the 2o17 period, 3,066 Christians were killed; 1,252 were abducted; 1,020 were raped or sexually harassed; and 793 churches were attacked. 215 million Christians experienced high levels of persecution in the reporting period. That’s 1 in 12 Christians worldwide.

North Korea has topped the list for the past 16 years, a result of religious persecution driven by a state that fears it will interfere with the worship of Supreme Leader Kim Jong-un.

“Christians are seen as hostile elements in society which have to be eradicated,” according to Open Doors.

North Koreans are under constant surveillance, with indoctrination against Protestant Christianity in particular beginning in childhood. Christians discovered with Bibles are sent to political labour camps or sometimes killed.

“As the state is removed, these kinds of extremists can take new levels of control.” – James Kozina, Open Doors

The contrast between Afghanistan and North Korea is stark. Where North Korea is entirely state-controlled, Afghanistan is “almost the opposite,” says James Kozina, Open Doors Australia’s spokesperson for the World Watch List. Yet when it comes to the persecution of Christians, Open Doors says the two countries are “almost equal” in intensity.

“There is an absence of state control [in Afghanistan] and Islamic extremists control large swathes of land; in some areas there is complete anarchy. That’s where we see an increase in pressure in Afghanistan – as the state is removed, these kinds of extremists can take new levels of control,” he told Eternity. 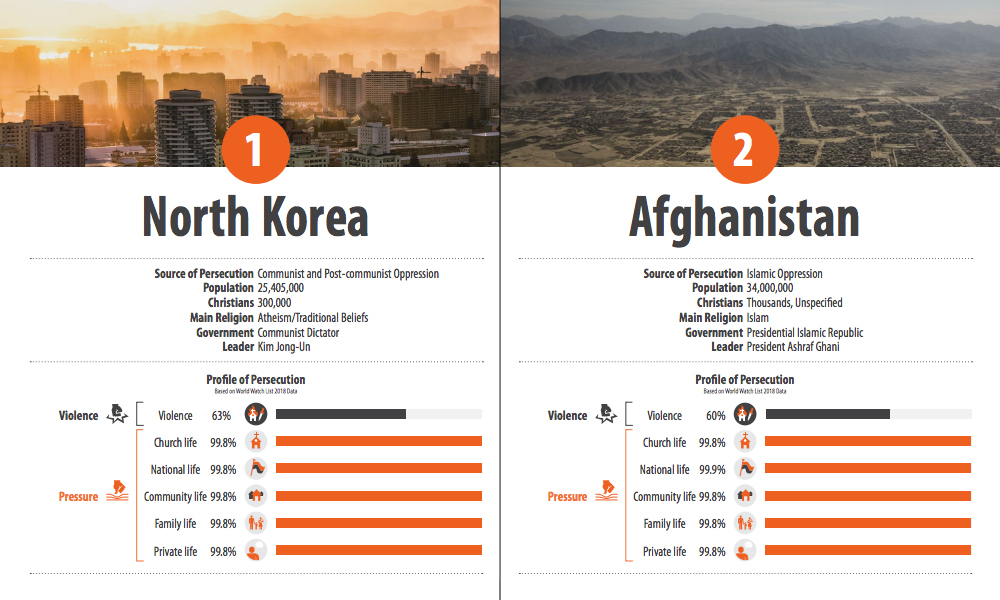 The World Watch List identifies two main expressions of persecution: violence and pressure. Violence is measured by reporting of concrete incidents, though Open Doors says that in some countries on the list it is difficult to ensure all incidents have been reported.

Pressure is categorised into five spheres for the World Watch List research: private life, family life, community life, national life and church life. Researchers ask questions including “How free is a Christian to relate to God one-on-one in his/her own space?” (for example, conversion, Bible reading, access to media); “How free are Christians to conduct their family life in a Christian way?” (such as baptisms, weddings, custody of children after conversion, forced religious identity for children); “How have restrictions, discrimination or harassment infringed upon the life of a Christian church or Christian institution?” (registration requirements for ‘official churches’, monitoring of preaching, disruption of church services, freedom to build churches and so on).

Open Doors says the rise of religious nationalism, particularly Hindu nationalism in India (ranked 11 on the list in 2018) and Nepal (which has appeared on the list for the first time at No. 25), and Buddhist nationalism in Myanmar (24) and Sri Lanka (44) have pushed parts of Central Asia higher in the persecution list this year.

“We’ve seen a dramatic rise of Hindu extremism in India,” says Kozina. “There are crippling attacks against Christians. [India] has been one of the fastest risers [on the list].”

The Open Door report adds: “Hindu radicals use violence to ‘cleanse’ the nation.” While there are more than 60 million Christians in India, they still rank as a small minority in a population of more than 1.3 billion.

By contrast, Syria has dropped places in this year’s World Watch List. In 2017, the country ranked at No. 6. In 2018, Syria has dropped to No. 15. Kozina told Eternity that while Syria’s persecution profile is still very high, Islamic State has “retreated from many places where Christians can still be found” in Syria, so some of danger they faced even just a year ago has eased.

“But,” says Kozina, “in a state at civil war, it is difficult to get accurate figures. It is entirely possible that violence is underreported in Syria. The situation appears to be becoming a little better, but it’s still an extreme score on the persecution scale.”

At least 150 Eritrean Christians were arrested by government officials during the last two months,…

“It’s very dangerous for anyone to identify you as a Christian in this country.”