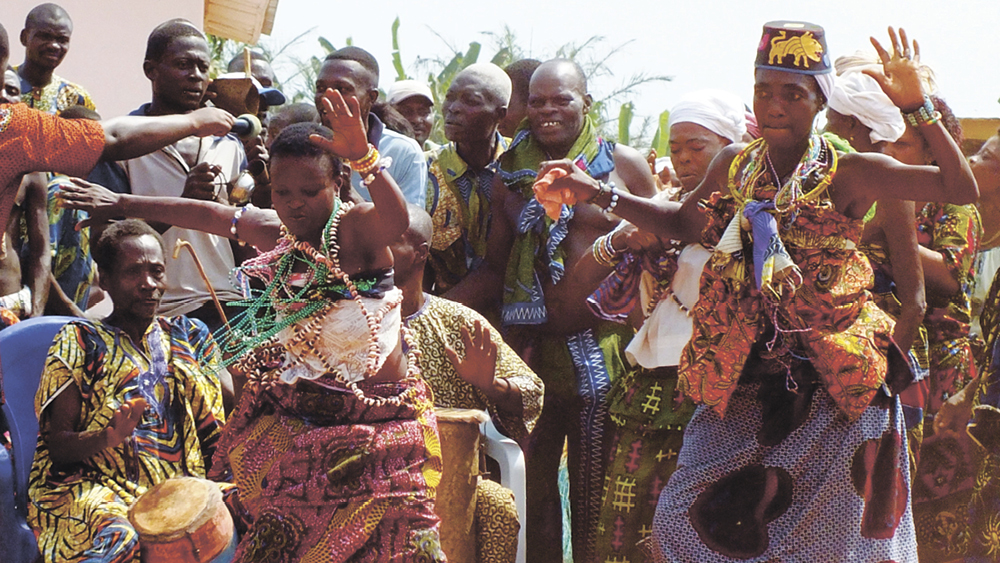 More powerful than the Voodoo

Carine told me that she grew up in Benin – a tiny, French-speaking nation in West Africa. Benin has a population of 10 million people, a sea port at the Gulf of Guinea, and it is the birthplace of the Voodoo religion.

“When you Google our nation,” said Carine, “The first thing you see is Voodoo. It’s the traditional religion. It’s our culture. It’s even bigger than the culture, it’s our belief system. It’s the oldest thing. It rules everything. The first thing we know is Voodoo. And when I was growing up in the 1980s, almost everyone was a Voodoo-Animist.

“Every family or village had their own Voodoo spirit. They would say, ‘This mountain is my Voodoo,’ or, ‘This river is my Voodoo,’ or sometimes their Voodoo would be the ground or a metal or a rainbow or a mermaid. In my mum’s ethnic group, the Voodoo was the python, so they would never kill pythons in her village. Sometimes a village has lots and lots of Voodoo spirits.

“And as well as that,” Carine went on, “We believed in Mahu. Mahu is in charge of everything; he rules everything, and he decides everything. But he is very distant. No one can speak to him, so there are many Voodoo spirits, maybe 200 of them, little gods, to talk to. And the Voodoo spirits would come out at night to check on the town. When they came, they would make a sound like a whirling through the air. It’s so loud, it’s like someone is hurling a rope. Like this!” said Carine, whirling her arm around. “You can hear it from 10 kilometres away!

“I was so scared of the Voodoo. I’d stay awake all night if I heard it. Sometimes the Voodoo would come to our front door and just stay there. If we went outside, we would be killed, we knew that. Only the Voodoo priest can go out when the Voodoo is there.

“At our house, we’d have Voodoos everywhere …”

“My dad was a ship’s captain,” said Carine. “So he was away at sea a lot, but he was always practising Voodoo. He used to pay the priest to build our own Voodoos at home – out of grass and sticks and soil and blood and body parts. The priest would come every month and slaughter a chicken or a goat, and then it would be mixed together, and the whole thing would be formed into a mound that looks like a human – that’s the Voodoo. The Voodoo would then be placed in the backyard or inside the house. At our house, we’d have Voodoos everywhere – in our bathroom and in the lounge room and under the bed – all of them were there to protect us. We believed it 100 per cent.

“But then something happened in the early part of 1988. My dad’s boat was stolen – the grand fishing vessel, belonging to the government of Benin – somehow vanished overnight, and nobody knew how it happened, or where it went. There was an uproar … and my dad took the blame. He was responsible for the boat, so he had to explain it. He couldn’t explain it, and he was taken to court. Later, he was let out on bail but he was forbidden to leave the city. He lost his job, he lost his income, he lost his power and he lost his lifestyle. He had nothing at all. It was very hard for him. He began to drink more.

“And time went by, until the end of 1989. That’s when my dad had a visit from his cousin, who was a Christian. And his cousin said to him, ‘You know, you need God in your life.’ My dad just laughed. ‘What are you talking about?!’ he said. ‘I’ve studied. I have a degree. I’m smart. I have Voodoos in my life! Why would I need God?’ Then my dad’s cousin asked him what he was doing on Sunday. ‘Nothing!’ said my dad. ‘I’m doing nothing. I’m waiting for the boat to be found!’

“By the end, my dad decided to follow Jesus.”

“But three Sundays later, my dad agreed to go with him to church, and the first thing he noticed was that the people in the church smiled at him. They welcomed him. And then a visiting preacher began to speak, from Ecclesiastes 1:1-12. The speaker said that everything in life was meaningless, including work and the generations and knowledge and even the water cycle, without God. My dad thought it was amazing. Somehow the preacher was describing his life! But then he wondered how the preacher knew him. He didn’t even plan to be at church. Then my dad thought he might get up from his seat, but he couldn’t. It was like something was holding him there. And afterwards, he knew he needed to talk to the preacher … and his cousin introduced them and they talked for two hours. By the end, my dad decided to follow Jesus.

“It’s an amazing story,” I said later, and we kept talking. Carine described what happened next, including the day they burnt the Voodoos. “We went to the church that day and that’s where they burnt the Voodoo. It was such a big celebration. But it was stressful for me too. I knew that people have died burning their Voodoo. But I could see my dad crying with joy. I’d never seen that before! Everyone was singing about the glory going to Jesus. I didn’t know what that meant, but I’d never seen my dad like that before. I couldn’t believe it.”

“… They didn’t have any power over us anymore. We weren’t scared anymore.”

I smiled with Carine. It was an amazing story. We talked together about her own conversion and church and her friends and her Bible study … but I still wondered if the fear of her early years went away. “Could you still hear the Voodoo spirits at night, after you became a Christian?” I asked.

“Yes, I could still hear them,” said Carine. “The Voodoo were still outside at night and we were under the same rules to stay inside. But I wasn’t scared anymore. I was never scared after the day we burned the Voodoo with my dad. It is true what it says in 1 John 4. “The One who is in you is greater than the one who is in the world.” Jesus is greater than any power! So the Voodoo spirits came to our house, because they liked to provoke the Christians, but they didn’t have any power over us anymore. We weren’t scared anymore.”

This is an edited extract from Naomi Reed’s new book, Finding Faith: Inspiring Conversion Stories from Around the World. (Authentic Media, UK, 2018).

Finding Faith: Inspiring Conversion Stories from Around the World.

Once a Muslim revolutionary in Iran, Daniel Shayesteh would rather have died than even consider Christianity. But then he read John’s Gospel.

This tiny house builder is a big believer

This tiny house builder is a big believer

… with an even bigger heart!

‘When I was growing up, almost everyone was a Voodoo-Animist. I was so scared’

‘When I was growing up, almost everyone was a Voodoo-Animist. I was so scared’