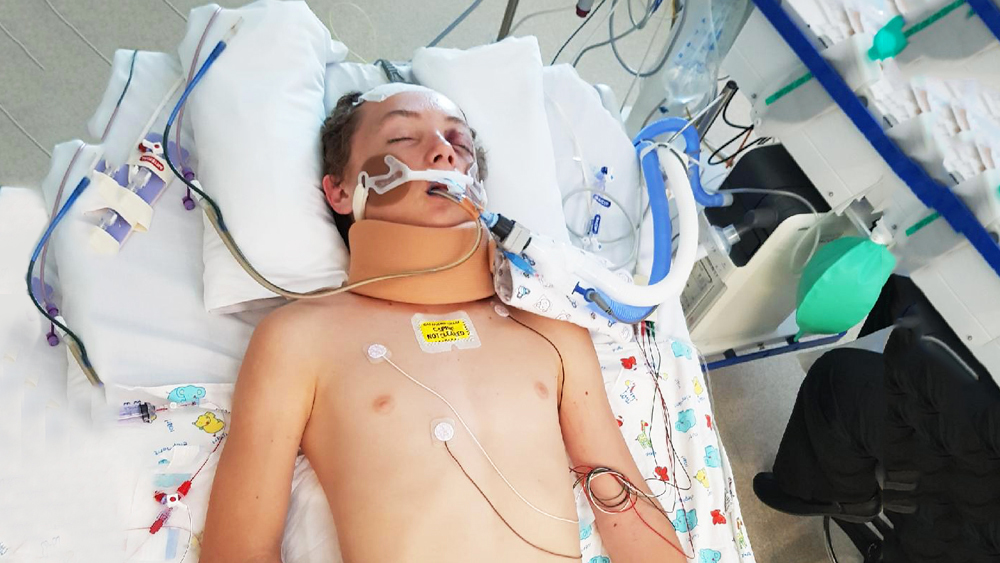 Tristan Sik after the accident that nearly killed him.
Australia good news

Power of prayer in teen’s survival

Doctors told Tristan’s parents to turn off his life support. They chose to keep it on

Carolyn Elder was not a “praying every day kind of person” when her 13-year-old son Tristan was critically injured in an accident near their home in Rainbow Beach, Queensland. While riding home on his pushbike on July 15 last year, Tristan was hit by a four-wheel drive travelling at 60km an hour, sustaining severe head injuries.

But while flying with Tristan to Lady Cilento Hospital in Brisbane in a LifeFlight chopper, Carolyn found herself begging God to let her son live.

“No one else can do anything right now, so please just everyone pray – that’s all we’ve got.” – Carolyn Elder

“When the accident happens, in the chopper on the way to the hospital, you are completely helpless – you don’t have anything else but God,” she tells Eternity.

“And all of a sudden, I started getting some messages on my phone from teachers at the school: ‘can we please pray for Tristan?’ And I’m like ‘Please do. I mean, no one else can do anything right now so please just everyone pray – that’s all we’ve got.’”

After two weeks in intensive care, with Tristan’s recovery prospects looking dire, doctors recommended turning off his life support systems. But that night in the shower, Carolyn heard a voice she believes was from God.

“I believe that it was God’s voice that I heard when they told me to turn off life support. I set off bawling in the bottom of the shower and I heard the words ‘Give him more time’ – and I have no doubt in my mind that was God telling me to give him more time.”

“He’s got this – I just needed to give him the time that he needed.”

“You can only imagine the weight on your shoulders when you’ve got to make that choice whether your child lives or dies.” – Carolyn Elder

When Carolyn chose to ignore doctors’ advice, they decided to show her how hopeless the situation was by demonstrating what would happen if his life support was withdrawn.

“I did feel that they were a little pushy. They were quite insistent and one of them even brought me in to see him not being able to breathe, on a failed attempt, to see if he could survive off life support – because he thought I needed to see that,” she says.

When Tristan breathed unassisted on the third attempt, the doctors were shocked while Carolyn was flooded with gratitude.

“You can only imagine the weight on your shoulders when you’ve got to make that choice whether your child lives or dies. So when he could finally breathe on his own, I don’t have to make that choice anymore. The choice was taken away from me in the best way possible. So that was a massive relief,” she says. 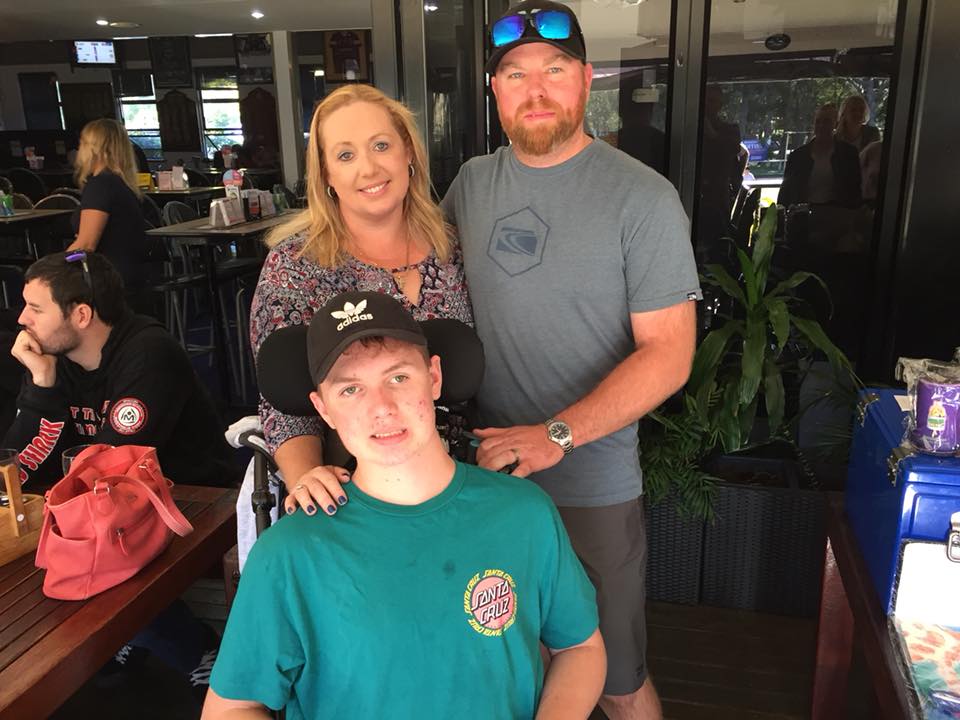 Carolyn and David Elder with Tristan

Twelve months later, Tristan is feeding himself, walking with assistance for balance, talking and back at school one day per week.

“He needs some fine tuning on his steps but he’s getting there. He can also turn around and do backward steps when he needs to. He seems to understand how to do everything; it’s just getting his body to respond,” says Carolyn.

“Right from the beginning it was always a very uncertain future and then there was not a lot of response through the rehabilitation stay in hospital. It wasn’t until we got him out of hospital that things started moving along quicker than anyone’s ever seen before.”

Carolyn says that when Tristan came home from hospital just before Christmas last year, it was as if a light had been turned on and he achieved milestones in six weeks that doctors thought would take eight months.

For Carolyn, every milestone was a miracle – raising his arm to scratch, closing his eyes on command, raising a lollipop to his lips (when doctors had said there was little chance of him being able to put a cup to his mouth.)

“By April he was eating steak and pork crackle. On the 14th February, on my 40th birthday, Trist repeated ‘I love you’ to me for the first time since the accident.”

At the end of May, Tristan returned to school one afternoon a week. His cognition is improving all the time – he can read, do basic maths and tell jokes.

“He understands everything everyone says around him. He can remember school work; I’ve tested him on punctuation and maths and it’s all there. There’s a few little things that he gets stuck on but, generally, cognitively he’s coming ahead in leaps and bounds, and you can reason with him quite well. It’s amazing,” she says.

“You look at Tristan – and you can’t say that prayer doesn’t work.” – Carolyn Elder

Carolyn says she has a deeper faith and a deeper connection with God since the accident, as well as a firmer sense of the power of prayer.

“Not that I think God doesn’t listen if it’s just one person praying, but … the more people you get, the louder it is. I know that doesn’t make any difference to God but it gives you more comfort to know that there are so many people out there on your side. And you look at Tristan – and you can’t say that prayer doesn’t work.”

“I’m just so excited for his future. Six months ago, it was hard to go to on to each day when you’re faced with the same problems. But when you start seeing such massive improvements, it just gives you so much hope for the next day and every day to come after that. To not ever think that he would have a chance to get married and have children and to now know that it’s a real possibility; it’s just amazing.”

With the approach of the first anniversary of the accident, Carolyn decided to hold a fundraiser to assist in Tristan’s rehabilitation expenses and to ensure that it was not an unhappy day.

“We live in a very small community, so it’s lovely that they’re all behind Tristan,” she says. “We held one fundraiser on the first anniversary of the accident. I wanted to make sure it wasn’t a bad day, it was a happy day, so we celebrate his survival and then you don’t get in the habit of every year you dread it coming.”

Marc Shearman, the ambulance officer who responded to the 000 call and played a key role in Tristan’s survival, shaved off his Ned Kelly beard as part of the fundraiser, which raised $7750.

Contribute to Marc’s shave for Trist

But can the church turn the page?