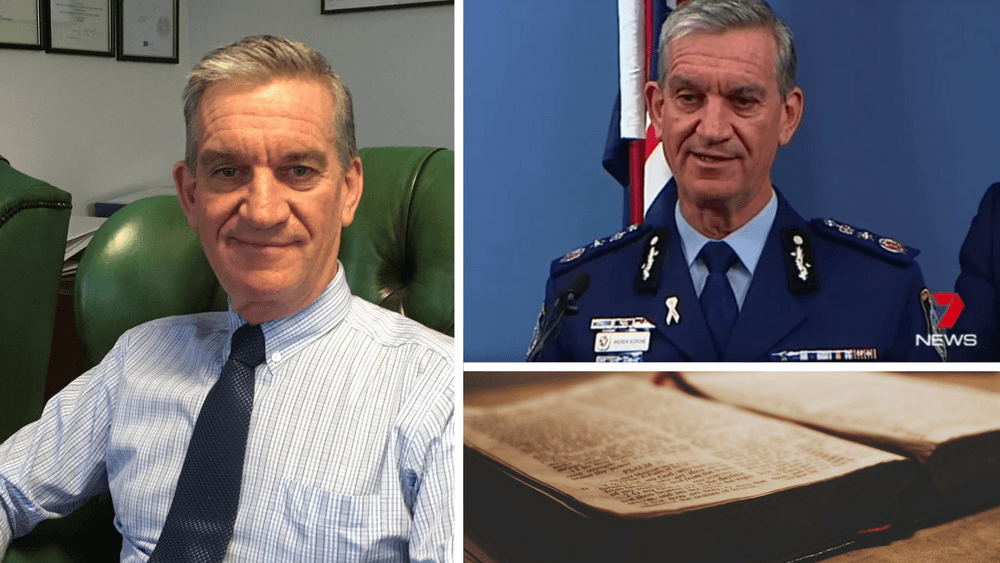 Police have prevented “many” terrorist attacks from happening in New South Wales, thanks to the latest technology, retiring NSW Police Commissioner Andrew Scipione revealed this week.

Scipione, who came under heavy attack for his handling of the 2014 Lindt Café siege, said people were not aware of how many terrorist-related events that police had prevented in NSW.

These revelations – and many others – were made during a wide-ranging interview in the Commissioner’s spacious office overlooking Hyde Park in central Sydney.

Scipione, 59, has been interviewed by several news outlets in the final weeks of his ten-year term as NSW Police Commissioner, but he spoke with Eternity about the influence his Christian identity and values have had upon his career.

‘I can do all things through Christ.’ – Andrew Scipione

Scipione revealed how his priorities are shaped by his Christian faith, including where he positions family, Jesus and work in his own life. Before he expanded upon such personal things, Scipione said that the thwarted terrorist attacks on Australia’s most populous state would have had “enormous impact”.

“They’re events that didn’t happen. That’s what it’s about, because when it happens, it’s all too late,” he said while speaking to Eternity only one day before the latest fatal terrorist attack on London. “If they had gone wrong it would have been very, very bad.”

Asked to reveal how many such attacks had been prevented, the Commissioner answered in this way: “If you look at the highest-risk prisoners that we have in our prison systems in NSW at the moment, well over two-thirds of them are on terrorism-related charges.”

He credited advanced technology “like we’ve never had before” for helping to deal with terrorism and driving down the crime rate in the state to its lowest point in 20 years – at a time when crime rates are growing in other states.

Reflecting upon his own development in policing, Scipione said he decided early on in his career that his leadership style would be modelled on that of Jesus Christ.

The Bible is “the greatest leadership tome you could read.” – Andrew Scipione

While studying for a Master’s degree at Macquarie University in Sydney, he had come across Robert K. Greenleaf’s theory about servant leadership – based upon the way Jesus led – and decided to adopt it.

“He was the modern father of servant leadership,” he said. “It was a copy of what Christ was, in terms of you lead by serving and that’s about enabling people to reach their goals. It’s about making sure that you’re doing what you can to help them get there.”

Scipione said he had “a million” leadership books in his library at home, “but the one that’s most important is the one that sits next to my bed every day and it’s my Bible. Because most of those theories have come from that source, the ones that work.”

Scipione said he turned to the riches of Scripture for “everything from dealing with the day-to-day pressures, the concerns, the fears, the worries … ‘Fear not, I am with you;’ and in terms of the ability to do what’s got to be done – ‘I can do all things through Christ.’

“I guess every part of my day, either knowingly or unknowingly, is captured and is driven by what is in Scripture. That’s the greatest leadership tome you could read.”

“Work really didn’t sit up there as the No. 1 consideration…” – Andrew Scipione

Scipione said he and his wife Joy had decided when they married at age 20 that they would put God first, family second and work third.

“So work really didn’t sit up there as the No. 1 consideration, never has. But, having said that, working as a police officer you get a chance to intersect with lives on a daily basis, people you would never otherwise come into contact with,” he said.

“You cross paths, you’re there dealing with the worst of the worst, you’re also there dealing with the saddest of the sad situations. People are often in desperate need of help, you’re … part of what was happening to those people as a victim – and you can impact by caring for them, and just explaining to them what’s happening. Looking after them at a time when they had no idea what was going on.”

Similarly, with offenders, Scipione would go out of his way to help them turn their lives around and make a fresh start. “That was particularly when you’re dealing with kids or young people that really needed to get their lives into some sort of shape or they’d have a life that would be full of crime; career criminals,” he said.

As he progressed through the police force, serving with the CIB, Gaming Squad, National Crime Authority and Counter Terrorism, Scipione said a big part of his mission was supporting injured officers and families who had lost loved ones who worked in law enforcement.

“Unfortunately, I’ve had far too many of those instances on my watch,” he said, citing police accountant Curtis Cheng in 2015 and Inspector Bryson Anderson in 2012, among others.

Scipione explained that the reason he continued to press hard in fighting crime was the biblical principle of justice.

“I stay committed to working through that because it’s the right thing to do. It’s about making people understand that justice is important; not for justice’s sake but also because it’s a biblical principle,” he said.

“People that are strong enough need to step up and speak up and do something, make sure you’re acting on it. So, whether it’s trying to reduce the number of people that are addicted to ice or whether it’s managing terrorist threats that have come in this day and age, where terrorism is such a problem, I would choose to bring every one of those problems under the authority of the teaching that I adhere to.”

“[My faith] gave me wisdom, I guess, probably beyond my years and compassion.” – Andrew Scipione

Scipione cast his lot in with the teachings of Christ at the age of 14 when he was converted through a youth group at his local church. Invited by his next-door neighbours, the Italian-Irish migrant was captivated by their happiness and sense of identity.

“They had people that cared about them and they were able to express that. I could see the investment that their parents were making in them.”

About six months after he came to Christian faith, Scipione’s father died suddenly. This plunged the teenager into a crisis that challenged him to become the man of the house.

“As I look back, I realise [my faith] gave me at least some understanding of the grief and it made me stronger for my mother. We were a long way from what she called home – she was from Northern Ireland and she had no one here. My sister had moved away to Darwin, and so she was very lonely and confused. It gave me wisdom, I guess, probably beyond my years and compassion.”

“They taught me how to be a father and a husband and a leader.” – Andrew Scipione

While it was hard to lose a father, Scipione met his wife Joy through that youth group and they began dating at 17 and married at 20.

“But through all of that, those people [at church] cared, and it wasn’t just the kids but the extended families. I really needed some strong, male guidance and leadership in my life and I was getting that from men in that church. There were four men in particular, who taught me how to be a man. They did what my dad would have done – they taught me how to be a father and a husband and a leader.”

As a strong leader and an effective advocate for the police force with politicians, Scipione says he had never found it hard to be a Christian in a public leadership role.

“You know what? I think sometimes we’re only limited by our own fears and concerns. ‘What if? Maybe I’ll suffer.’ That’s okay, Christ says if you suffer for your faith, you’re doing it for me and you’ll be blessed.”

“See, it’s not about me. This whole journey is not about me. I was a Christian before I became a commissioner and when I retire as commissioner, guess what? I’ll go back to the things that really matter, which is my family and Christ. That is the priority order that we set and, again, that’s biblical; we took that straight out of God’s word.

“I can’t tell you what to do but I can tell you what’s happened to me in my life; hopefully that’ll give you some guidance to what he [Jesus] can do for you.”

In the face of danger, one woman is bringing hope

A useful tool but a dangerous master

A useful tool but a dangerous master