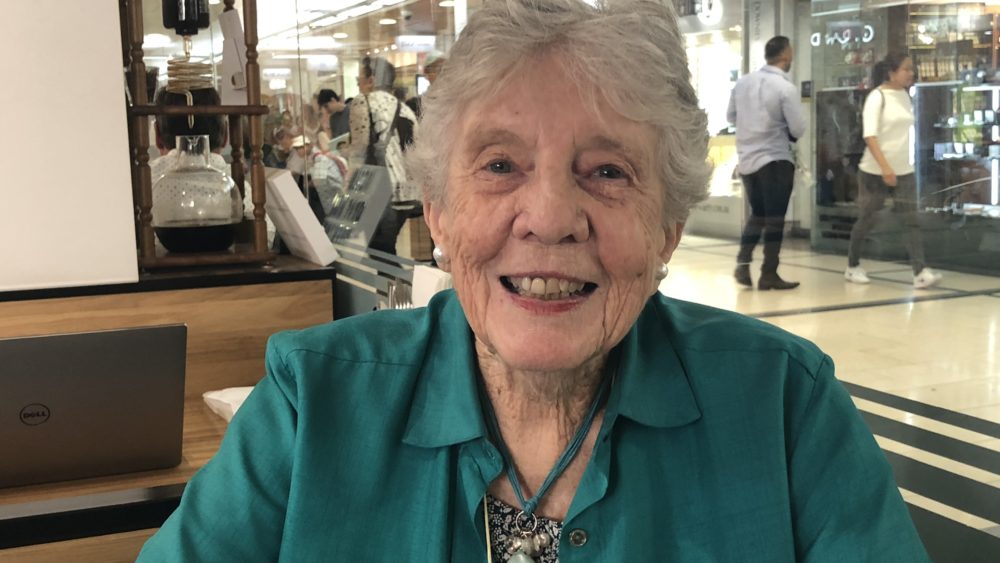 How lonely ladies in towers found friendship and faith

Revered Bible teacher Robyn Claydon had just come back from Russia – witnessing the opening of the Christian churches after 40 years – when she had a brilliant idea about how to reach people for Christ in Sydney’s penthouses.

By providence, Robyn had landed in Russia 10 days after the 1991 coup when people were first tasting the exhilarating joy of freedom to worship. She had been amazed to see how many of the 900 people at one of four Sunday services at Moscow First Baptist Church were standing to hear her greeting. And how there were 400 children in Sunday school when, just 10 days earlier, there had been none.

She had also been moved by how people she had given Russian Bibles to rocked back and forwards, clutching their first Bible and saying “precious, precious.”

Back in Australia in 1992, Robyn was joint leader of the 8.30am service at St Andrew’s Anglican Cathedral in Sydney. She had been asked to reach out to the people living in the high-rise apartment blocks around the cathedral in the centre of Sydney.

The Bible teacher, preacher and evangelist is telling me how she gave up her salary as deputy principal of Abbotsleigh School in Wahroonga, to spearhead a faith ministry as senior associate for women in world evangelisation with the Lausanne Movement – which is how she came to be in Russia.

She is telling me the story in Eternity café at Town Hall after having led Bible study at the cathedral, located just upstairs from where we are sitting. And that Bible study she has been leading for 26 years is still attended by two of the women she met through her pioneering high-rise outreach.

Robyn needed a lot of ingenuity to meet people living in the high rises around the cathedral because you couldn’t get past security to door-knock at apartments.

She figured that people who moved to the city might try out the cathedral once, so she went through the little cards that visitors fill in to find some names, addresses and phone numbers.

“My main aim was to lead these people to Jesus, but you can’t start straight off on that.” – Robyn Claydon

After ringing up various people to varied responses, she struck gold when she contacted an elderly lady who lived in the iconic Park Regis apartments just opposite the cathedral. The Park Regis was the first residential tower in the Sydney CBD and its sought-after apartments have amazing views over Hyde Park to Sydney Harbour and the Heads.

“Her name was Elaine – I had her phone number, so I rang her up and I just explained that I was visiting people in the city from the cathedral and I’d love to pop in some time and see her,” Robyn explains.

“She said that would be fine, so we had a lovely time and I was able to chat to her about where I’d been – you know, my main aim was to lead these people to Jesus, but you can’t start straight off on that.

“I’d just come back from Russia … So without opening up the whole idea of the gospel to Elaine, I was able to share with her the joy of people receiving a Bible and saying ‘precious.’

“I was able to say why it was precious.”

“You don’t make friends in the city, you don’t try to.” – Elaine

During that first meeting with Elaine, Robyn said she would love to meet other women who lived in the prestigious apartment block.

But Elaine made Robyn an offer: “Well, why don’t you give me a few weeks and I will look at people coming up and down in the lift and if I like the look of them I’ll say ‘do you live here or are you a visitor?’ And if they say ‘I live here’ I will say ‘would you like to come and meet a friend of mine from the cathedral who’s just come back from Russia and have morning tea?’”

“They’d never met each other and they lived in the same building!” – Robyn Claydon

Robyn gave Elaine six weeks to find 10 people. After six weeks, she rang up again – and Elaine had found exactly 10.

“I said ‘that’s wonderful,’ so we worked out the date and I went. It was the most beautiful time because those women didn’t know each other! They’d never met each other and they lived in the same building! So they were chatting and looking at the views from her apartment and so on and I had a lovely time and it was very easy.

“I just shared with them about the women that I’d met and about the Bible, what it means to me, and then at the end I said to them – we’d had such a lovely time – ‘I’d love to meet all of you where you live. If I leave a piece of paper and pencil at the door, if you’re happy for me to visit, you can you write down your name, your unit number and a phone number’ – and they all did. So I had 10 names. That’s how my ministry started from the cathedral. It started with Elaine, just across the road, and it grew to about 10 people.”

Robyn recalls one sad lady she visited who lived in utmost luxury in the Park Regis penthouse.

“It was beautiful, it had the whole expanse, and she told me her story, which was very sad. At the end I said ‘could I pray for you? Would you mind if I told God all the things you’ve told me?’ She said ‘oh my dear, what do I do?’ I said ‘you just sit there and I will pray’, so I did. After that I went to other buildings and a lot of those people started coming to the cathedral.”

While many of the women from the Park Regis attended the cathedral now and again, Elaine became a regular member and came to a genuine faith.

“Her life became a testimony without her knowing.” – Robyn Claydon

“She came to the 8.30am service because that’s the one where I was preaching, leading the service! In those days I and Barry Marsh, who was a minister, were given the 8.30 service, so our responsibility was to lead that service. One of us led and one of us preached every week – we did this for about 10 years and it was wonderful.”

When eventually Elaine died, Robyn co-led her funeral service and had an opportunity “to share in the service about her faith, her journey, what it had meant, how it had changed her.”

After the service, her bemused family came up to Robyn and asked where all the people at the service had come from.

“And I said ‘well, she became a vital part of the cathedral congregation – these are cathedral friends – and there are a lot of people from the apartments as well.’

“Her life became a testimony without her knowing.

“How vital was that time she enabled me not only to meet her but to meet more women. It was wonderful.”

Nothing in life is fair. Nothing at all. There is no balance, no ledger, no…

Pondering the source of joy over the pots and pans