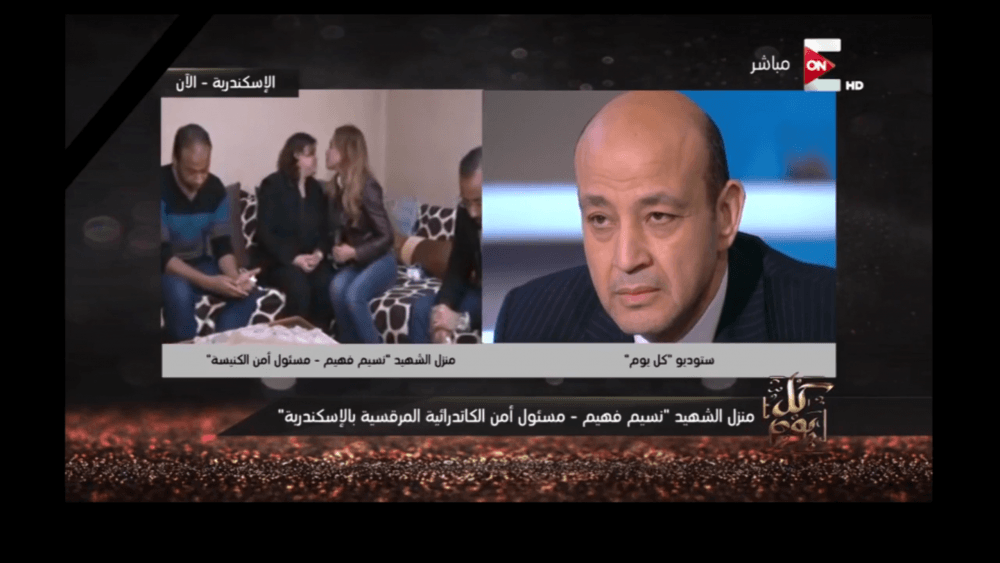 Egyptian journalist and television host Amr Adeeb was stunned into ten seconds of silence after watching a colleague interview the widow of Naseem Faheem, the guard at St Mark’s Cathedral in Alexandria, Egypt, who was killed in a suicide bomb attack on Palm Sunday.

“The Copts of Egypt are made of steel!” he finally exclaimed.

“If it were my father, I could never say this. These people have so much forgiveness. But this is their faith and religious conviction. These people are made from a different substance.

Forgiveness Incarnated from The Bible Society of Egypt on Vimeo.

“May God have mercy on Naseem Faheem. He is a hero and a martyr and a great example to all of us.”

On Palm Sunday, the guard redirected a suicide bomber through the perimeter metal detector at the cathedral, and was probably the first to die when the terrorist detonated a 12kg explosive. Sixteen people, mostly women and children, were killed but the guard’s action saved the lives of dozens of people inside the church.

Adeeb noted that Egyptian Christians, who make up 15 per cent of the population, “deeply love this country and, oh, how great is the amount of forgiveness you have! If your enemy knew how much forgiveness you have for them he would not believe it … the country is moving on by this great woman and her children.”

Moments earlier, the widow had declared that she was not angry with the suicide bomber.

“I’m not angry at the one who did this,” said his wife, with children by her side. “I’m telling him, ‘May God forgive you, and we also forgive you. Believe me, we forgive you.’

“‘You put my husband in a place I couldn’t have dreamed of. Believe me, I am proud of him. And I wish I was there beside him.’”

“In the history and culture of the Copts, there is much taught about martyrdom.” -Ramez Atallah

In response to the widow’s amazing testimony, Ramez Atallah, president of the Bible Society of Egypt, reminded the millions of Coptic Christians that martyrdom had been central part of their ancient heritage.

“In the history and culture of the Copts, there is much taught about martyrdom,” he told Christianity Today. “But until Libya, it was only in the textbooks, though deeply ingrained.”

When 21 mostly-Coptic Christians were kidnapped and beheaded by Islamic State in 2015, their families forgave the terrorists in an impressive Christian witness. The Libyan martyrs were a turning point, as Copts watched the victims call out to Jesus in their moment of death.

“Since then, there has been a paradigm shift,” said Atallah. “Our ancestors lived and believed this message, but we never had to.”

“If they can live with this grace and graciousness …  we should be able to do the same.” – Bishop Anba Angaelos

Coptic Christians trace their roots as a community to the apostle Mark, who first evangelised the area. Copts date their liturgical calendar from 284 AD, the beginning of the Roman persecution under Diocletian. Its history as a church of martyrs has returned with a vengeance.

The twin suicide bombings on Palm Sunday, which killed more than 45 people, were the second ISIS attack on Christian sanctuaries in five months. Last December, 29 people were killed in a suicide bombing at the papal cathedral in Cairo and this week ISIS attacked the St Catherine’s monastery on the southern Sinai peninsula.

All three Christian denominations cancelled Easter Sunday festivities as the state declared a three-day period of mourning and held an Easter service for the injured in a military hospital. Muslims reacted in shock and sympathy.

Egypt’s Coptic Christians have set a standard of forgiveness that everyone should imitate, the leader of the Coptic Orthodox Church in Britain said in an interview with the Catholic News Agency.

Hundreds of Christians have been driven out their homes after attacks in Sinai.

Anba Angaelos, general bishop of the Coptic Orthodox Church in Britain, said he takes “huge pride in their witness and in their example.”

Meanwhile, hundreds of Christians have been driven out their homes after attacks by Islamic State affiliates in al-Arish, a city in Egypt’s Sinai region, which have resulted in seven deaths.

He said the displaced Sinai Christians were being cared for and the government was working to provide education for the children.

“Of course they want to go back,” he said of Sinai’s Christians. “No one ever wants to leave their home. Leaving one’s home is traumatic, and especially when this isn’t just leaving. They’ve left sometimes with the very bare necessities, to have left their whole lives behind.”

However, they would not go back while the perpetrators were still in the region and could strike again.

He said the international community must also be aware of the importance of promoting peace in the country so Christians can remain in their homes.

“The tragedy is that the number of Christians in the Middle East has dwindled because every other country where there was a significant Christian presence has been devastated by war or conflict and they have moved.”

Life from death in the Coptic community this Easter

Spirituality is key in suicide prevention

Spirituality is key in suicide prevention