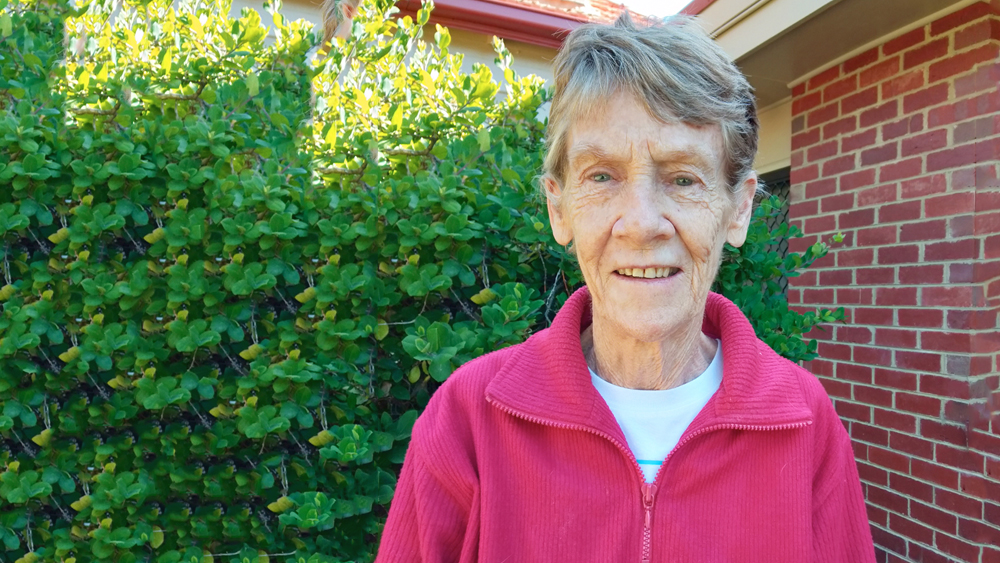 Patricia Fox believes justice is at the heart of the Bible.
World social justice

Aussie nun exiled from the Philippines after 27 years

Patricia Fox, the Australian missionary nun who was forced to leave the Philippines when her visa was cancelled, rejects the idea that she infringed Philippines sovereignty by her outspoken advocacy for the country’s poor and exploited.

“When Jesus told us to preach the good news to the world, I don’t think he was envisaging ‘national sovereignty’ when we come to the dignity of the human person and the common good,” she tells Eternity from Melbourne, where she is now based.

“Where there is exploitation and massive human rights violations which cause poverty and dehumanisation, as church we are universal and all people are our brothers and sisters as children of God, and we cannot call ourselves Christian if we remain silent in the face of such injustice.

“This, to me, is not crossing the line in terms of Philippine sovereignty but preaching the good news of how society can and should be structured for the benefit of all, particularly the most vulnerable.”

Sr Fox had been based in Manila as national coordinator for Rural Missionaries of the Philippines, which took her out to a lot of different communities, where she saw the problems farmers and tribal people were facing in their struggle for their ancestral lands. 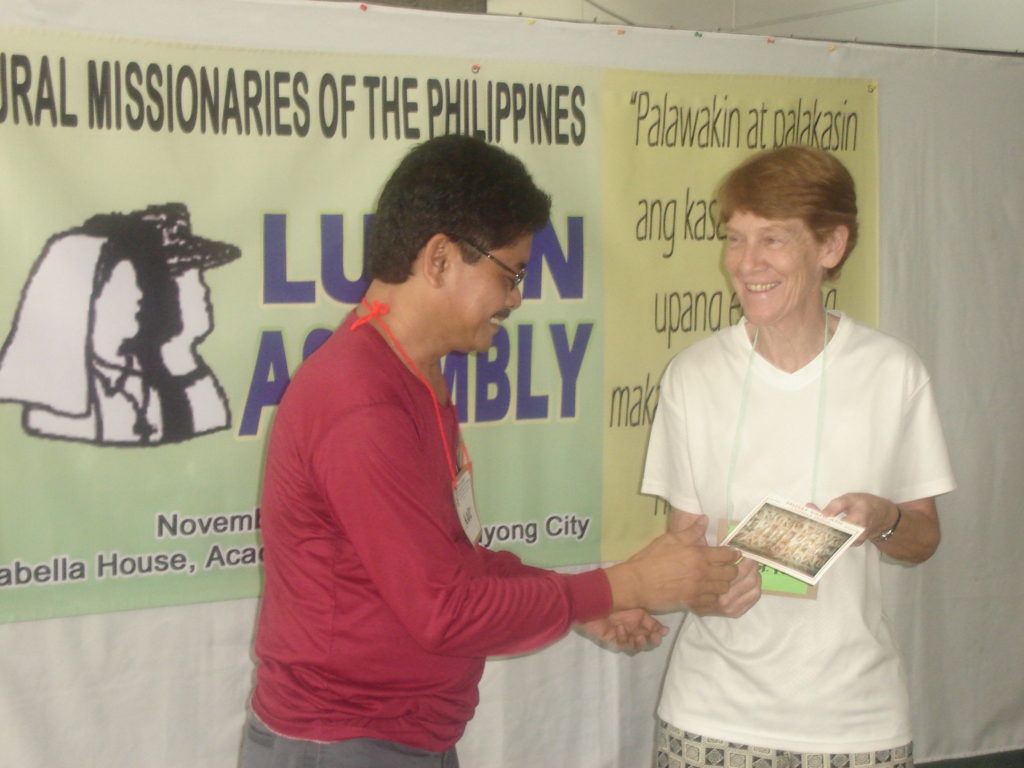 Receiving an award from a farmer at a Rural Missionaries meeting.

“And then I started volunteering with a farmers’ group that agitates for agrarian reform but also gives training in organic farming, in groups, management, cooperatives, things like that.”

She believes that the heart of the Bible is justice, so when she is working for justice she is pursuing a biblical spirituality.

Sr Fox was one of two Australian sisters of Our Lady of Sion who founded the order in the Philippines in 1990 “because the majority of the people are poor and we were talking about seeing the world through the eyes of the poor,” she says. She spent 27 years living among and advocating for the poor.

Recently she became more outspoken about abuses such as extra-judicial killings and exploitation under the government of President Rodrigo Duterte, who accused her of “partisan political interference and disorderly conduct.” 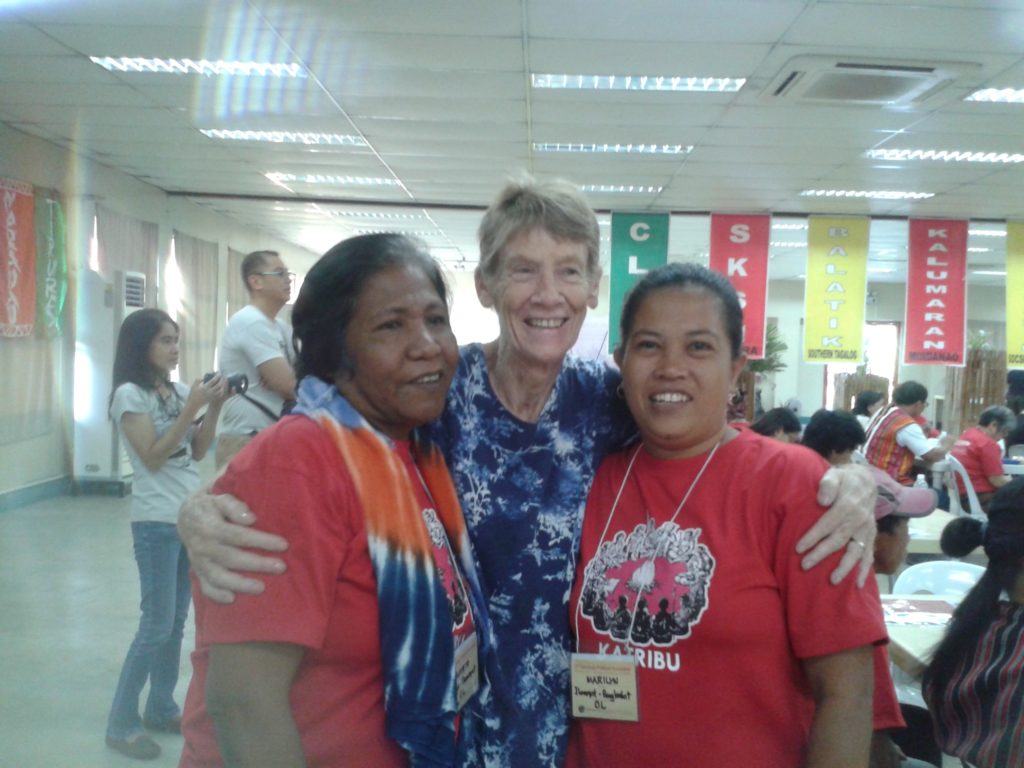 Patricia Fox with friends at a meeting of Indigenous peoples just before she left the Philippines.

In April, she was detained by the government after a trip to southern island of Mindanao which is under martial law because of terrorist activity.

“I belong to a network of agrarian advocates which is academic, church groups, teachers and others – and because we heard dreadful stories coming out of Mindanao and we also heard that a lot of people were being falsely charged, especially farmers and tribal people, a lot of people were being killed and so we decided to have an international fact-finding mission,” she told ABC Radio.

Brought up in a devout Catholic family in Melbourne, Sr Fox grew up going to church and saying prayers at home. “It is almost I was born with it!” she says.

She says she joined the Our Lady of Sion after attending school at the Sisters of Sion College in Melbourne at both elementary and secondary level.

“There was something about the spirit of how they related to each other that really attracted me. They seemed to relate almost as family and coming from a close family that appealed to me,” she explains.

When Sr Fox first visited the Philippines, it was a time when she was thinking through liberation theology – a movement developed mainly by Latin American Catholics that attempts to address the problems of poverty and social injustice alongside spiritual matters.

“There was something about how you found Christ in the people for whom you work to bring about change,” she explains.

“I found people in the Philippines that I thought were living it [liberation theology]. I saw them close to the people. I saw them in the struggles of the people, for justice, for freedom.” 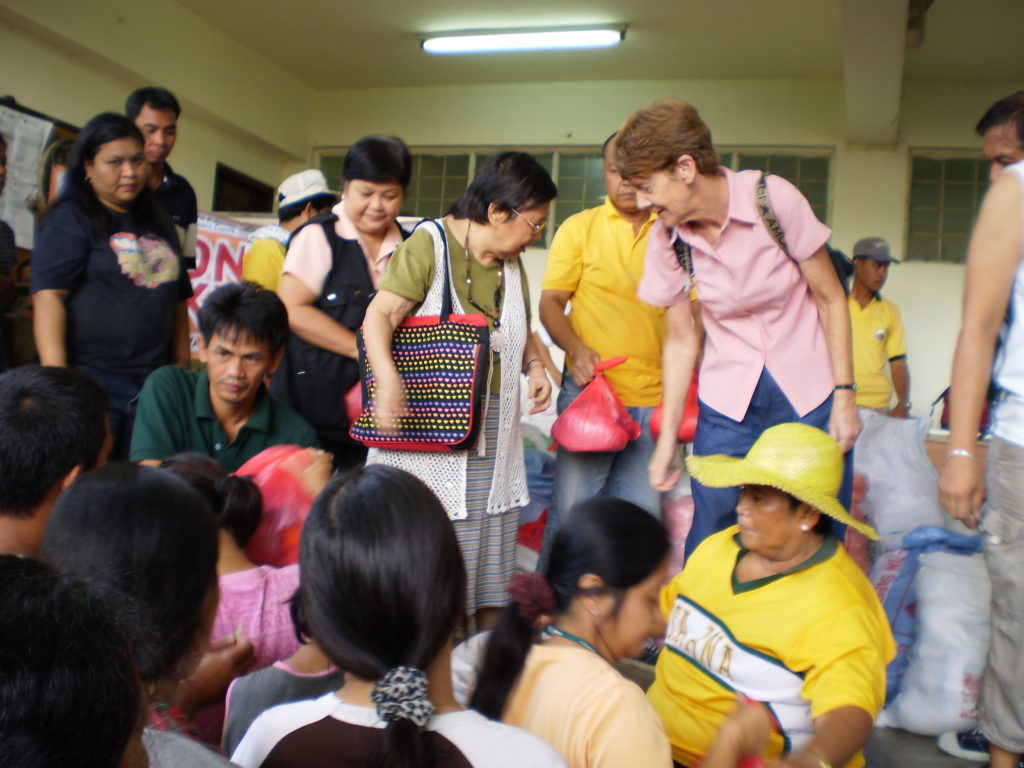 Sr Fox says she had been in Nicaragua, and liked it there, but there was something about the gentle Filipino personality and Asian culture that resonated with her, as a quiet person.

Before she and Sr Oonagh O’Shea began work in the Philippines, they visited four dioceses and found one in a rural area that was led by a bishop who seemed to share their vision.

“It was called a prelature, divided into north and south. So we went to the south and worked a lot with church groups and also getting enculturated, becoming familiar with the language, and then Oonagh stayed in the south and I went up to the north with the justice and peace group of the diocese,” she recalls.

Following the philosophy of preaching the gospel but only when necessary through words, she felt God was with her in her struggle to help oppressed people, which “gave meaning to my vocation.”

“People often describe me as a presence. I was there and would talk informally with people. I didn’t often take the lead, but just being that church presence among people who were struggling for justice. It gave some sort of authority almost, that it’s a valid struggle.

“Sometimes I gave talks and sometimes I gave programmes, but a lot of it was just informal, just sitting around and chatting about their lives and how they saw God and that sort of thing.”

When she was told she would have to leave the country because her visa would not be extended, she sat down with her lawyers and cried.

“On the Wednesday I was told to go by the Saturday and the Thursday and Friday were holidays, so it made it very difficult to finalise the case. And it was so quick in the end, I hadn’t started packing or anything. It was a shock. I was with the lawyers and we were all crying, including the lawyers.”

Although forced to leave the country, Sr Fox says she was not deported and her deportation case is still ongoing.

“The Bureau of Immigration has never ever answered any of the legal arguments. They made allegations in the beginning that I was on a missionary visa and missionaries should only teach catechism and not get involved with the people,” she says.

“And then they came up with that it’s illegal to go to forums or anything like that, which is totally anti-constitutional and international anti-human rights law.

“The appeal is with the Department of Justice, so we’re sort of hoping, but a lot of the institutions there are very much willing to do the President’s will. The lawyers are wanting to take it up as far as the Supreme Court because of the issues on the rights of freedom of assembly, freedom of religion, that are all involved in my case, but even with the courts it’s questionable; anyway, I think they’re going to try to keep fighting it, just on principle.”

Sr Fox says she won’t give up hope of returning to the Philippines just yet.

“The Filipino community here is anxious to have me speak to them and I’ve been invited to speak to the  human rights subcommittee in parliament and a human right conference, but I haven’t really planned long- term yet.

“We were praying that I’d stay, but it obviously wasn’t God’s will, so I guess I pray that I can have the wisdom to discern where God’s calling me.”

What could have helped Marty Sampson's faith

What could have helped Marty Sampson's faith