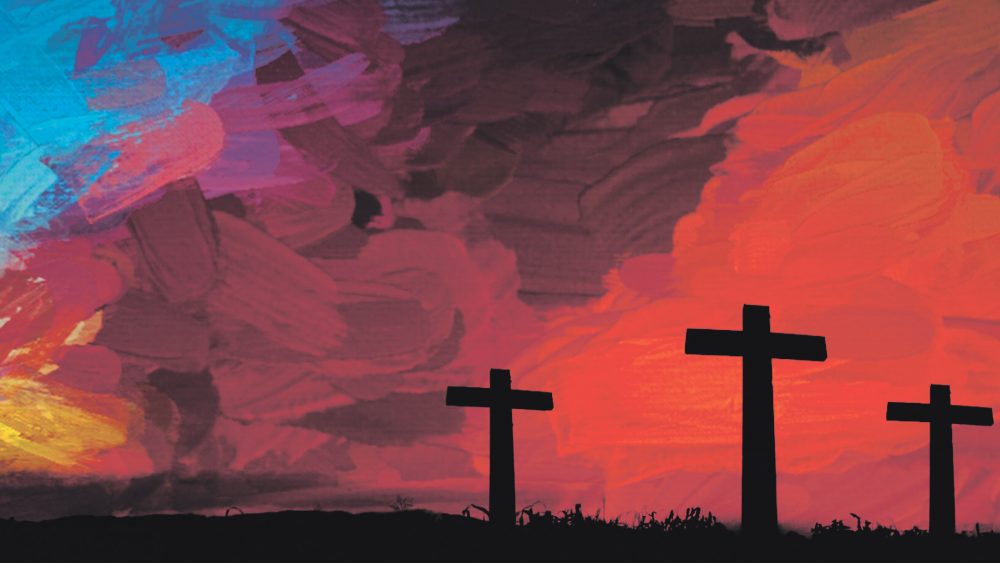 The Easter events point to the "saviour who died for all."
Raheel9630/Pixabay License
Opinion easter

The Gospels provide many fascinating portraits of Jesus – as teacher, healer, prophet, judge and so on – but I would give them all away just to know him as Saviour.

The cliche of salvation

Because “salvation” is so central to the Christian faith, it is prone to being seen as an embarrassing cliche. “Are you saved?” seems like the question of the televangelist, not a grown-up modern spirituality.

But things only become cliches when an originally sound idea gets overused and misused. It’s important, then, to strip back the regrettable accumulations and look again at the original. And there’s no better time to do this than Easter.

The early history of our convict colony was not quite the godless wasteland we imagine. And one remarkable incident underlines perfectly why the theme of Jesus as Saviour is far more than an uncomfortable piece of jargon.

The convict and the Saviour

In 1785, the 17-year-old Londoner Samuel Peyton was found in possession of a stolen watch. He was sentenced to “7yrs transportation” and in May 1787 he set sail for Sydney Cove with the 700 or so other First Fleet convicts. When he arrived eight months later, he was set to work as a stonemason building the hospital, prison, governor’s house and so on.

Within a few months, Peyton was in trouble, caught in an officer’s quarters stealing “a shirt, stockings, and a comb.” He was tried and sentenced the next Monday, and on Wednesday June 25, 1788, he was hanged before the entire assembled colony. He was just 21 years old.

Samuel Peyton would only be another name in a convict log were it not for a letter he wrote the evening before his execution. It provides an extraordinary example of the central meaning of Easter:

With what agony of soul do I dedicate the few last moments of my life to bid you an eternal adieu: ere this hour tomorrow I shall have entered into an unknown and endless eternity. Too late I regret my inattention to your admonitions, and feel myself sensibly affected by the remembrance of the many anxious moments you have passed on my account. For these and all my other transgressions, however great, I supplicate the Divine forgiveness; and encouraged by the promises of that Saviour who died for us all, I trust to receive that mercy in the world to come, which my offences have deprived me of in this. Commend my soul to Divine mercy. I bid you an eternal farewell.

The old-fashioned language of this letter isn’t the only striking difference between Peyton’s day and ours. His open admission of fault – his “transgressions” – seems almost quaint today. But for much of human history, people were so acutely aware of divine judgment it was difficult to convince them of the love and mercy Jesus taught. Today, people are so accustomed to the notion of divine love it is difficult to convince anyone of sin and judgment. But talk of it we must, if we are to understand the history of Jesus and Christianity.

Any casual reader of the Gospels will notice Jesus did not teach that God loves us because we are lovable. He insisted that our loving of the stuff of creation while ignoring the Creator is the very picture of a “sinner” (Luke 15:11-14), and that the standard by which we are all to be judged isn’t “Am I better than my neighbour?”, but do I “love God with all my heart” and “love my neighbour as myself”? (Matt 22:36-44).

Jesus’ teaching leaves the religious hypocrite and the moral agnostic in exactly the same precarious position. Our culture is accustomed to criticising the religious hypocrite. However, if there is a Creator of this universe, ignoring him could hardly be less scandalous than neglecting our neighbour. That’s the logic of Jesus.

He came to save us from the punishment that our sins deserve.

It is only against this background that Jesus’ role as “Saviour” makes any sense. He did not come to “save” humanity from Roman rule (in the 1st century) or climate change (in the 21st century).

He came to save us from the punishment that our sins deserve. It is one of the first things the Gospels tell us: “Today in the town of David a Saviour has been born to you” (Luke 2:11), “you are to give him the name Jesus, because he will save his people from their sins.” By title and by name (“Jesus” means the Lord saves), Jesus was the Saviour. It is a theme that reaches its climax in Christ’s death by crucifixion. As the young convict observed, Jesus is “the Saviour who died for us all.”

One of the most famous atheists has questioned whether Jesus could possibly have been crucified.  Prolific French philosopher Michel Onfray declares: “Another improbability: the Crucifixion. History again bears witness: at that time Jews were not crucified but stoned to death.” In fact, as any historian at Onfray’s university in Caen, France, could tell him, it is probably truer to say Jews were among the most crucified people in the ancient world.

But the history is not the most significant part of this story.

We have documentary evidence of thousands of Jewish crucifixions – in one text, we hear of 2000 Jewish crucifixions in one day. In any case, the testimony of the non-Christian Jew Josephus puts Jesus’ crucifixion beyond doubt: “Pilate, upon hearing Jesus accused by men of the highest standing amongst us, condemned him to be crucified.”

But the history is not the most significant part of this story. The meaning attached to this history is wonderful beyond compare.

Luke’s Gospel draws our attention to the salvation theme in an unexpected way. When we come to the crucifixion narrative itself, the whole scene focuses on whether Jesus really has the ability to save:

The people stood watching, and the rulers even sneered at him. They said, “He saved others; let him save himself if he is God’s Messiah, the Chosen One.” The soldiers also came up and mocked him. They offered him wine vinegar and said, “If you are the king of the Jews, save yourself.” There was a written notice above him, which read: THIS IS THE KING OF THE JEWS. One of the criminals who hung there hurled insults at him: “Aren’t you the Messiah? Save yourself and us!” (Luke 23:35-39)

It was precisely by not saving himself that Jesus was able to save others.

The significance of this scene has been described well by one of the late-twentieth-century’s foremost historians of ancient Judaism and Christianity, David Flusser of the Hebrew University in Jerusalem (an observant Jew not a Christian). He describes Luke’s account of Jesus’ death as essentially reliable, including the threefold mockery.

The one who claimed to save people from the coming judgment could not even save himself from the wrath of Rome. The irony brings us close to the point Luke wishes to emphasise: it was precisely by not saving himself that Jesus was able to save others.

The centrepiece of Luke’s account of the crucifixion is the salvation of one of the criminals crucified along with Jesus. Having declared his own unworthiness and guilt, the other criminal turns to Jesus with a plea: “Jesus, remember me when you come into your kingdom.” I love the simplicity of the request. And I love the extravagance of Jesus’ reply even more: “Truly I tell you, today you will be with me in paradise.”

This is no mere cliche but a reality of eternal significance.

Christianity has always declared that Jesus died for Jewish rebels like the man crucified with Jesus, petty thieves like Samuel Peyton, neglectful materialists, thankless atheists, and even for the morally self-righteous. This is no mere cliche but a reality of eternal significance. For any who sincerely turn back to God, Jesus is the “Saviour who died for us all.”

Dr John Dickson is an author and historian, and the Founding Director of the Centre for Public Christianity.

10 Reasons you can Trust the Bible

Why are we called to obey God when he knows we can't do it?

They myth of the "hateful Christian"