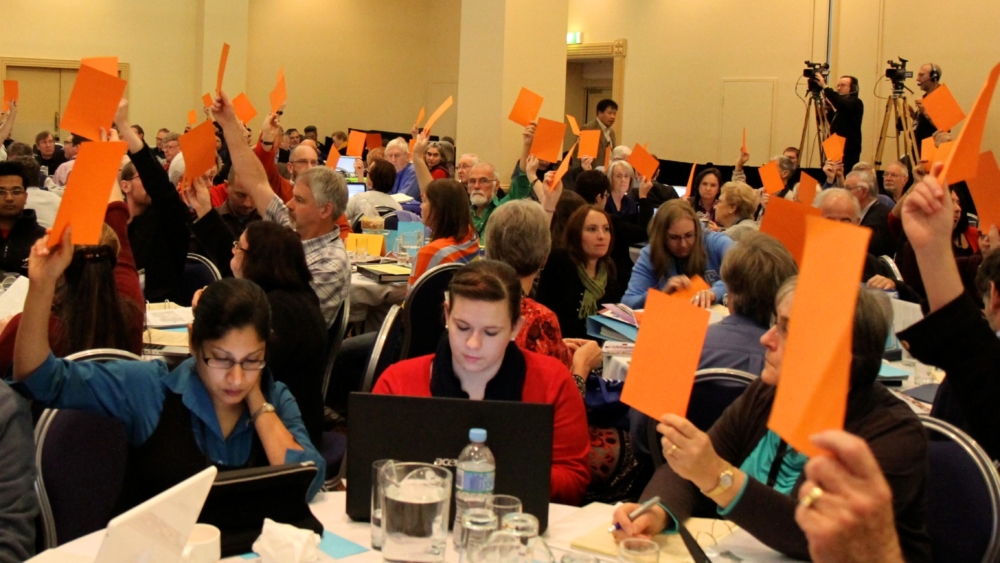 National vote on changing marriage rites to include same-sex couples

Next month the Uniting Church in Australia (UCA) will decide whether or not to adopt same-sex marriage.

Some 265 members of the church will gather together for the UCA’s National Assembly meeting in Box Hill from July 8-14.

The National Assembly is likely to vote in favour of same-sex marriage. This would lead, by August this year, to the adoption of the church’s official marriage rite to include same-sex couples.

Local church councils will be able to choose whether same-sex marriages take place on their property or not.

A group of UCA members are circulating a petition which states: “If the 15th Assembly of the Uniting Church adopts these proposals in or close to their current form, humbly, and in accordance with our prayerful convictions, we state that we will not accept these decisions, and we will stand apart from them in ways that we will determine after the Assembly meets.”

The motion before the Assembly includes these points:

• To note that the Working Group on Doctrine Report documents a continuing and faithful struggle on matters relating to sexuality and marriage spanning several decades in the Uniting Church; and that the issue of same-gender marriage is one about which many Uniting Church people faithfully hold strong and at times mutually exclusive convictions;

• To adopt the following policy statement on marriage: Marriage is a gift God has given to humankind for the well-being of the whole human family. For Christians, marriage is the freely given consent and commitment in public and before God of two people to live together for life. It is intended to be the mutually faithful life-long union of two people expressed in every part of their life together. In marriage two people seek to encourage and enrich each other through love and companionship, experience the fruitfulness of family, contribute to the well-being of society and strengthen the mission of the church.

In an explanation attached to the motion, the movers include this reason for the change: “Within the diversity of our fellowship, there are Ministers and Congregations who believe the change in our social context that allows same-gender marriage is consistent with the Gospel, and want to be able to celebrate same-gender marriage as well as opposite-gender marriages. They are seeking the consent of the rest of the church to have this ability. They are not asking the rest of the church to agree with them, but allow them to follow their conscience in this way.”

The UCA is home to conservative, culturally distinct groups of members

The make-up of UCA’s Assembly is complicated. About 80 per cent of the Assembly is elected from synods (state councils) and presbyteries (regional groups of churches). But office holders and appointee members take part as well.

In general terms this means the Assembly tilts more in a liberal direction than the wider UCA membership. Exactly how much of an effect this has is a live question, and difficult to determine.

The larger churches in the UCA are evangelical; for example, New Life Church in Queensland represents ten per cent of that state’s church attendance. But the large UCA churches are outnumbered at assembly by a much larger number of smaller churches.

The median attendance at UCA worship services, per congregation, is 35 people (according to a UCA census published in 2014).

The UCA is home to conservative, culturally distinct groups of members such as Koreans and Pacific Islanders.

About 90 per cent of Uniting Church people under 50 years of age are evangelicals, according to Rod James, Adelaide leader of the Assembly of Confessing Congregations (ACC) in the Uniting Church.

In 2011, the National Church Life Survey asked church attenders their view on same-sex marriage. The UCA results showed 26 per cent in favour, 18 per cent neutral or unsure and 56 per cent disagreeing or strongly disagree (The figures were close to reversed for civil unions, which indicates that marriage terminology or ceremonies concerned UCA members). Eternity understands that the UCA’s culturally diverse congregations were underrepresented in the survey.

More about the UCA Assembly

Church to decide at July Assembly

Pubs and clubs can have 50 people. Why not church?

Pubs and clubs can have 50 people. Why not church?

Zoom. It's not the real thing

Zoom. It's not the real thing

Why we should want to meet after the shutdown

What changed in the twenty teens

What changed in the twenty teens

Looking back at the past decade in Australian Christianity