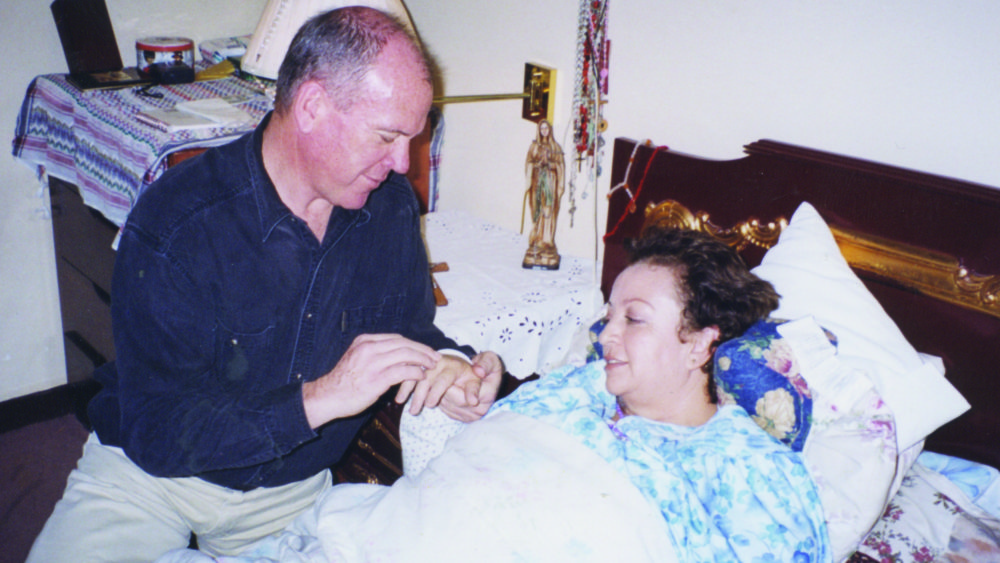 The sceptic and the stigmata

How an investigative journalist landed the biggest story of his life

Ron Tesoriero remembers how his mate’s life changed at a barbecue.

Spending plenty of leisure time on the New South Wales central coast from the 1970s, Tesoriero got to know well the bloke in the holiday house next door.

“He said he had doubts believing in the existence of God.” – Ron Tesoriero

But he already knew him well, as did most of Australia.

Tesoriero’s neighbour was Mike Willesee, the father of investigative journalism in Australia, who died in March. Willesee was a media powerhouse whose hard-hitting reporting shaped how Australian TV news was done. Founder of A Current Affair, Willesee was also an outspoken doubter, a key thread explored in his recently published memoir A Sceptic’s Search for Meaning.

Tesoriero is a crucial figure in Willesee’s life story and is glad to speak with Eternity about his close friend. As Willesee reveals in A Sceptic’s Search for Meaning – written during his final year of life – a conversation over the barbie coals was a defining moment for the journalist personally and professionally.

“At that stage he was a true sceptic,” says Tesoriero of the friend who had drifted far from his childhood roots of Christian faith. “He said he had doubts believing in the existence of God.”

But over backyard sausages and beer in the late 1990s, Tesoriero told Willesee of his interest in investigating the theme of how God intervenes in this world. This quest had taken Tesoriero to many countries to explore supernatural phenomena such as a woman in South America with stigmata – the experience of Jesus Christ’s crucifixion wounds manifesting on people’s bodies.

“Mike’s reaction was that ‘These things can’t happen and don’t happen. I’ve done stories about these claims of the miraculous and there is never anything to it. You’re wasting your time.’”

As a lawyer who helped his neighbour with various legal matters, Tesoriero was not setting out to convince Willesee. He knew Willesee was an A-grade doubter who had made a televised career of exposing religious or spiritual shams. But in light of what the two mates went on to do and how Willesee’s faith was affected, Tesoriero has no doubt it was part of God’s plan that he challenge the journalistic integrity of his cynical friend.

“I said to Mike that ‘you claim to be Australia’s most talented and gifted investigative journalist. You built your reputation on looking at the facts, examining them and then saying what you think. But here you are expressing negativity without even looking at the facts – and you don’t even want to look at them.’”

A Sceptic’s Search for Meaning records the lengthy process by which Tesoriero set up an interview for Willesee with Katya Rivas in Bolivia in 1999. An uneducated woman, Rivas was able to pour out pages and pages of theological thought which allegedly flowed from Jesus. But the signs of the stigmata were what drew most people to her. In her interview with Willesee, she predicted they would appear two months after Good Friday, 1999.

“It was a turning point in his life.” – Ron Tesoriero

Willesee agreed that no one touched her; nor did she do anything to herself.

“Mike had gone in, using those same sorts of talents he was renowned for – scepticism, attention to detail, accuracy – and he comes away with the view that this actually happened.”

Willesee turned Katya’s footage into a highly rating TV special but, before that, Tesoriero had made documentaries examining “through the eyes of science, unusual happenings associated with Catholic faith”. Having also written several books, Tesoriero’s ‘Reason to Believe’ site continues to apply scientific processes to cases such as blood flowing from a statue of Jesus, or transubstantiation (the belief that bread or wine used in Holy Communion becomes the actual body and blood of Jesus).

With two decades having passed since filming Katya, Tesoriero remains disappointed by public reactions to her story. “The father of investigative journalism testified that this happened, and yet so few people really take it seriously – that it did happen.

“Yet it was a turning point in his life. He did his job – he reported what he saw; he said it was real. The consequences are significant, but the world that we live in does not want to go that way.”

For Willesee, though, the experience took him on a path that gradually returned him to his Catholic roots across the final two decades of his life. And his meeting with Katya was pivotal.

“This story was the biggest story of my life and the only one that matters.” – Mike Willesee

Two months before Willesee died in March from throat cancer, his mate Tesoriero interviewed him. As it does throughout A Sceptic’s Search for Meaning, the subject of Katya loomed large in their conversation. “I have no doubt that Mike regarded, as I do, that was an important event. One that was given as a sign from God for a world that does not want to know him.

“As he said to me: ‘You know, of all the stories I have done in my life, everything pales into insignificance to this one. This story was the biggest story of my life and the only one that matters.’”

“I think that in the event of that stigmata, we have been given the opportunity to be like Thomas.” – Ron Tesoriero

Tesoriero believes Willesee ended his life on the note of being convinced God is real, at work in the world, and that he had been witness to it. During his interview, Tesoriero expressed his belief that Willesee had been put in a similar position to the disciple Thomas. Famously, after Jesus’ resurrection, he allowed Thomas to touch his crucifixion wounds. That incident of seeing and believing echoes in what Willesee saw 20 years ago in Bolivia, according to Tesoriero.

“I think that in the event of that stigmata, we have been given the opportunity to be like Thomas,” explains Tesoriero.

“I think [God] has given it so that people can, like Thomas, see and believe. And Mike was of that view.”

A Sceptic's Search for Meaning

A prayer advocate opens up her ‘miracle books’

One of Australia’s most recognised journalists, Mike Willesee, has died at the age of 76…

Sharing life in an aged care facility from a distance

When Peter O’Connor came to know God at age 20, it was if he had…