The Christian crisis in the Middle East is far from over, says religious liberty analyst and advocate Elizabeth Kendal, who works to raise awareness of the plight of the persecuted and of global trends in religious freedom.

At the time of the 1987 census, Iraq’s Assyrians numbered 1.4 million. Today they are reduced to about 200,000 and most are displaced and destitute, she says. Their towns lie in ruins, security remains tentative, and a serious Kurdish land-grab is under way. “Our allies through two world wars, Iraq’s Assyrians – whose ancestors turned to God at the preaching of Jonah – have been betrayed and abandoned to genocide,” she says.

As a preview to two talks in Sydney and Melbourne, Professor Kendal tells Eternity why Australian Christians should care about what God is doing in the Middle East.

While the situation for Christians in the Middle East is certainly not as bad as it was at the peak of the crisis in 2014-2015, it not getting much better either, she says.

While Syria’s Christians are free to worship and minister openly in Syria’s government-controlled areas thousands remain displaced and terrorism will remain a threat into the future, she says.

“In Egypt, Christian insecurity reached crisis levels in February 2015 when Islamic State (IS, formerly ISIS) issued a ‘Message Signed in Blood to the Nation of the Cross’ – a video showing the beheading of one Ghanaian and 20 Coptic Christian martyrs – and called for Copts to be killed ‘wherever they may be found.’ 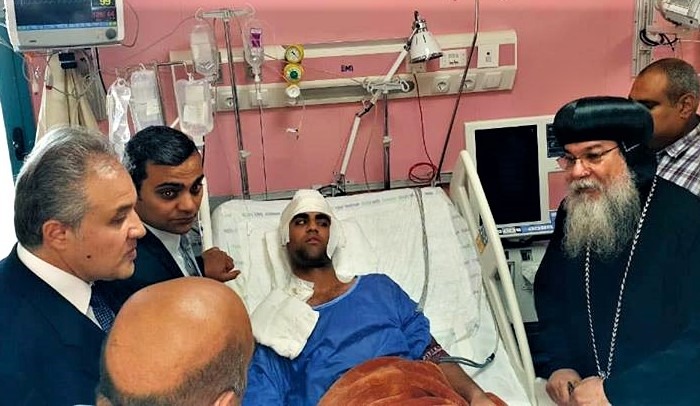 Archbishop of Minya, Anba Makarios, visits a victim of the terrorist attack near monastery of St Samuel the Confessor in Egypt in 2017. Morningstar News

“Meanwhile, the situation for Christians in Turkey is extremely delicate. In Iran, witnessing to Persian Muslims will land you in prison. And in Saudi Arabia it is illegal, upon penalty of death, for a Saudi citizen to be anything other than Muslim. Furthermore, these three states –revolutionary Iran, NATO-member Turkey and US-allied Saudi Arabia – fund all the Islamic militancy across the region.”

Kendal says the view that the crisis for Christians in the Middle East is over rests on the popular assumption that IS/ISIS is the problem, but that is not the case.

“While ISIS might be a problem, it is not the problem. What’s more, while the Caliphate has been dismantled and many ISIS fighters killed, others have returned to guerilla warfare, settled into sleeper cells, or defected to al-Qaeda. And while ISIS and al-Qaeda differ on strategy, they have the same goal: an Islamic Caliphate in the Middle East as a base for global jihad.”

She says the problem stems from the post-1979 revival of fundamentalist, Koranic Islam courtesy of Saudi Arabia, which by its nature is radical.

“It is pro-Sharia (Islamic law), pro-jihad (Islamic holy war), intolerant and supremacist. Unlike biblical Christianity – the goal of which is to see human beings reconciled to their gracious Creator – the goal of fundamentalist Islam is ultimately to attain political power so that Allah’s supposedly perfect way (sharia) might be enforced. The problem is, after centuries of decline and decades of weakness, Islam is back!”

Kendal’s analysis sees the end of a century of Western hegemony in Mesopotamia (Syria-Iraq) and a new Battle for Mesopotamia by jihadists and Islamic militias.

“The Allied victory in World War I culminated in the break-up of the Ottoman Empire. Despite having promised the Arabs a super-state (or Caliphate), the Allies instead carved up Mesopotamia and established a regional balance of power. For much of the 20th century, Mesopotamia served as a buffer zone between the region’s imperial powers. The 2003 US-led regime-change operation in Iraq overturned that balance, triggered sectarian war and facilitated the rise of revolutionary Shi’ite Iran,” she says.

“All the jihadists and Islamic militias are nothing but proxies of revolutionary Iran, NATO-member Turkey, and US-allied Saudi Arabia and Qatar.”

Despite these conflicts and obstacles, God is working powerfully in the region, she says.

“God is at work in the Middle East today, so much so that I hardly know where to begin! He is at work in the war zones and the camps where Christians are serving and Islam’s repressive structures have largely collapsed.

“Gospel radio and satellite ministries are growing and Scriptures are in high demand. Disillusioned, Muslims are leaving Islam in unprecedented numbers. Some meet Jesus in dreams and visions; others experience his grace through miracles. That said, most Muslims who turn to Christ do so because Christians have loved and cared for them.”

In 2014, United Bible Societies reported that Bible distribution was increasing markedly in the world’s great “persecution hotspots”. Topping the list, with an eight-fold increase through 2012, was Syria. In 2010 (before the unrest) 14,000 scriptures were distributed in Syria. In 2011, the year of Syria’s “Arab Spring” uprising, the total was 19,000. In 2012, the year Syria descended into full-scale civil war, 163,000 scriptures were distributed.

Kendal says that the number of Muslims coming to faith in Jesus Christ in the Middle East is unprecedented. “God is doing something new and an incredible spiritual battle is under way,” she says.

The number of Iranian Christians is believed to be close to one million with millions more open and expressing interest. “This growth has occurred mostly in the last 20 years and almost exclusively among Farsi-speaking, ethnic Persian Iranians,” she says.

Prayers are also being answered, she says, citing the case of the Ebada family, whose three-year-old daughter Christina was seized by Islamic State in Qaraqosh (in the Nineveh Plain) in August 2014. The family were worried that Christina would be sold into sex slavery or trafficked out of the country. Prayers went up around the world.

Christina Ebada is reunited with her family. World Watch Monitor

In June 2017, Christina was found wondering in the ruins of Mosul. Abandoned by the militants in 2014, she had been taken in and cared for by a Muslim family who had been unable to flee the Battle for Mosul (Oct 2016 to July 2017). In answer to the prayers of many, Christina was reunited with her family just before her sixth birthday.

“Despite all the suffering, the persecuted Church has many stories of miraculous deliverance, provision, revelation and transformation. Though it be dark, chaotic and incredibly dangerous, God is there and he is at work. Sometimes he intervenes with miracle, but mostly he works through us, his servants. God has not abandoned the Middle East, and neither should we,” Kendal says.

Kendal calls on Christians in the West to speak up, about the suffering of Christians, to give financially, to help sustain the persecuted church , to go on mission despite the difficulties and to pray.

“Displaced and destitute believers need teachers, health-care workers, builders and friends. And now as ever, Muslims need to hear the saving and transformative gospel of Jesus Christ,” she says.

“I am convinced that as we engage with and intercede for our suffering brothers and sisters, God does a new work among us. He is knitting us together using chords of love forged in the flames of persecution in answer to the High Priestly Prayer of our Lord, “. . . that they may become perfectly one, so that the world may know that you sent me . . . ” (from John 17:20-26 ESV).

Elizabeth Kendal is an international religious liberty analyst and advocate. She serves as Director of Advocacy at Canberra-based Christian Faith and Freedom (CFF) and is an Adjunct Research Fellow at the Arthur Jeffery Centre for the Study of Islam at Melbourne School of Theology. Each week she publishes a Religious Liberty Prayer Bulletin (RLPB) to help facilitate strategic intercessory prayer.

She has written two books: Turn Back the Battle: Isaiah Speaks to Christians Today (Deror Books, Melbourne, Australia, Dec 2012) which offers a Biblical response to persecution and existential threat; and After Saturday Comes Sunday: Understanding the Christian Crisis in the Middle East (Wipf and Stock, Eugene, OR, USA, June 2016).