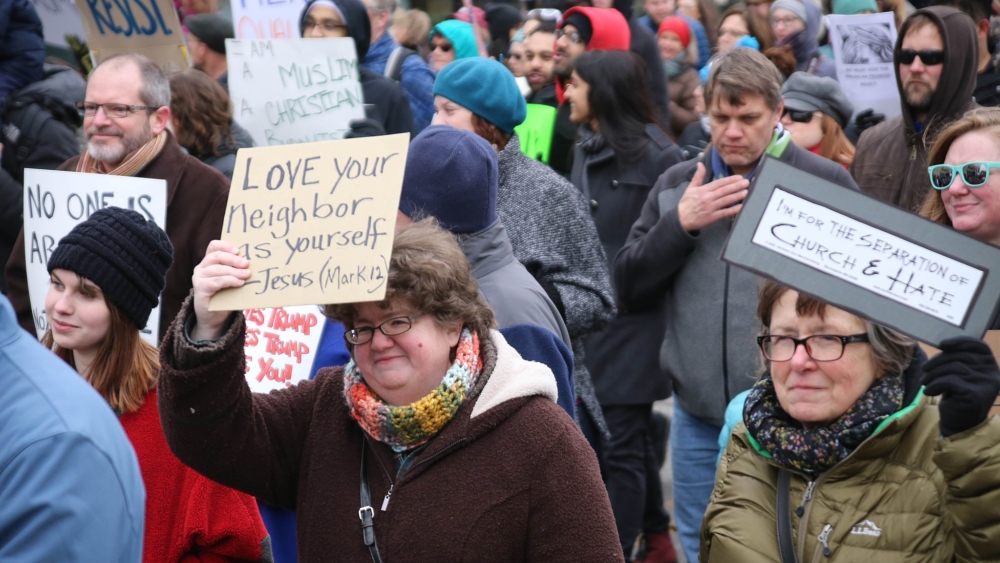 A Love Your Neighbor as Yourself rally in St Louis, Missouri, in February 2017, protesting against Donald Trump's executive order on immigration.
World US politics

US Attorney-General quotes the Bible in defence of separating families

Christian leaders of all denominations have hit back at US Attorney-General Jeff Sessions quoting of the Bible on Thursday in defence of US President Donald Trump’s immigration policies that have resulted in the separation of families who have come to the US seeking asylum.

“I would cite you to the Apostle Paul and his clear and wise command in Romans 13, to obey the laws of the government because God has ordained the government for his purposes,” Sessions said during a speech to law enforcement officers in Fort Wayne, Indiana, on Thursday, local time.

“Orderly and lawful processes are good in themselves. Consistent and fair application of the law is in itself a good and moral thing, and that protects the weak and protects the lawful.”

Nearly 2000 minors were separated from adults from April 19 to May 31, according to Department of Homeland Security figures obtained by the Associated Press. The New York Times cited an example of a 18-month-old boy separated from his mother since February, describing a system that loses track of parents.

Several prominent black clergymen criticised Sessions for using the Bible to justify separating immigrant children from parents. The Council of Bishops of the African Methodist Episcopal Church, along with Jesse Jackson and William Barber, in separate statements, called Sessions’ use of biblical scripture incorrect.

“The Bible does not justify discrimination masked as racism, sexism, economic inequality, oppression or the abuse of children,” said the council, leaders of the denomination.

Christian supporters of the President have been increasingly critical of the policy. Franklin Graham, the son of Billy Graham, who heads Samaritan’s Purse, told the Christian Broadcasting Network, said “It’s disgraceful. It’s terrible to see families ripped apart and I don’t support that one bit.

The conservative Southern Baptist Convention passed a motion calling on the government to maintain “the priority of family unity” in immigratioon policy at its national gathering last week.

Southern Baptist ethicist Russell Moore and National Hispanic Christian Leadership Conference President Samuel Rodriguez joined other members of the Evangelical Immigration Table in sending a letter of concern to the president on June 1.

“As evangelical leaders representing tens of thousands of local churches, campus communities and ministries, we are concerned that the new ‘zero tolerance’ policy at the US-Mexico border, recently announced by Attorney-General Sessions and being implemented by the Department of Justice and the Department of Homeland Security, has had the effect of separating vulnerable children from their parents,” the letter reads.

“Romans 13 is a text that brutal and unjust governments have misappropriated for centuries.” – Owen Ross

A round table of evangelical leaders also expressed their concern. They included the National Association of Evangelicals and the council for Christian Colleges and Universities.

Methodists who also answered back included Owen Ross, a former leader of a predominantly Hispanic church in Dallas. He said in a Facebook post: “Romans 13 is a text that brutal and unjust governments have misappropriated for centuries. And yes, I am aware that the AG is a member of The United Methodist Church. This makes his perversion all the more painful to me.”

Many Catholics, another part of the pro-family group the Trump administration often appeals to, are critical. One bishop went as far as suggesting that Catholics who help carry out the Justice Department’s policies are violating their faith and perhaps should be denied Communion.

The Attorney-General said people who crossed US borders to seek asylum should be treated just as US citizens who are convicted of a crime who go to jail and can’t take their children with them.

He said the parents were to blame for endangering their children’s lives by seeking asylum in the US, and the US had gone to great lengths to protect the children while they were forced to separate from their parents.

“It is not biblical to treat migrants and refugees like animals.

It is not biblical to take children away from their parents; =.

It is not biblical to ignore the needs of the stranger.

It is not biblical to enforce just laws.

Do not use the Bible to justify sin.”

Just as in the US, Australia is becoming polarised between right and left. Some Christians,…