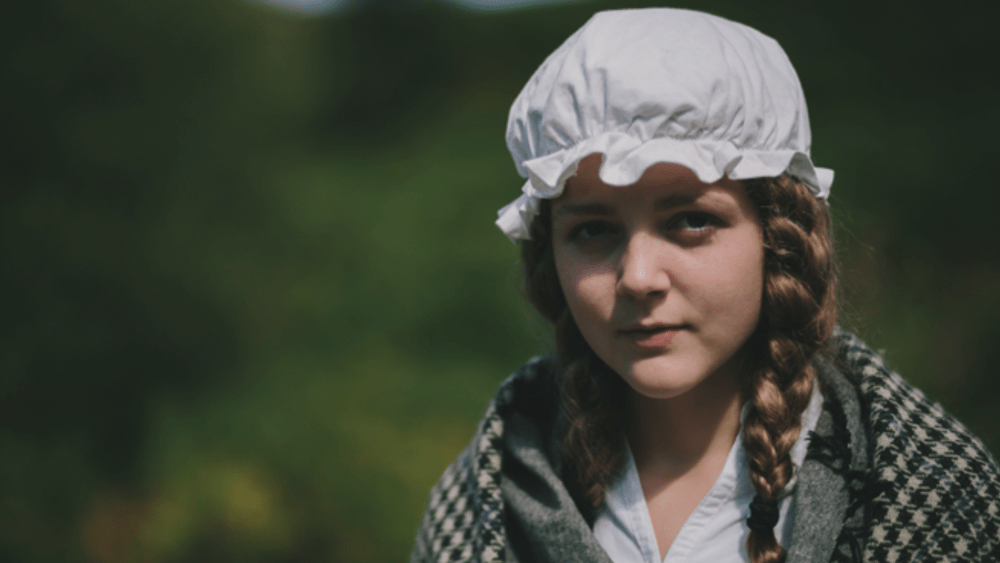 In 1800, a 15 year-old girl walked 26 miles (42km) from Llanfihangel-y-Pennant in Wales to the town of Bala to buy a book. That book was the Bible, the girl was Mary Jones, and her journey would inspire others to form the first Bible Society, to get the Bible out to people all across the world.

On this International Women’s Day, we think you should know her story.

Mary lived with her mother in a small grey stone cottage in the Welsh countryside. Her home was in a green valley in the shadow of a mountain, and from there you could sometimes see the sea in the far distance. Her father was a weaver who worked very hard to support his family, but he died when Mary was young.

Mary knew what was expected of a nine-year-old girl. Without grumbling, she would do her share of the chores. She would scrub the floors, feed the chickens, cook and help to keep the house tidy.

On Sunday mornings, Mary dressed in her Sunday best, would walk to the little chapel in the village, 3 kilometres away. At the front, the minister would open a large, black, leather‐bound book. As he began to read, Mary would marvel at the wonderful words and store them up in her heart. After the service, she would cautiously go to look at the impressive book.

On its cover were two words printed in gold. Mary guessed that these said “Holy Bible” because she had heard the minister mention the name of the book. The words inside looked odd to her.

“How can anyone ever make sense of these squiggles?” she thought. “Oh, how I wish I could read this book for myself, or even have one for my own!”

Then, on Sunday morning, the minister announced that a school was to open in the village. Mary was excited. “Now I can learn to read,” she said, “and make sense of those strange marks in the book at chapel.”

“Oh, how I wish I could read this book for myself, or even have one for my own!” – Mary Jones

The schoolmaster, Mr Evans, and his wife moved into a farmhouse not far from Mary’s home. Mary worked extra hard to finish her chores quickly so she could go to the Evans’ house to learn to read. Her mother saw how hard her daughter worked at both schoolwork and her duties at home.

Months passed and seasons changed, until at last Mary was asked to read from the chapel Bible one Sunday morning. She was not very tall, so a special wooden box was made for her to stand on so that she could see the words properly. Now the squiggles were no longer strange to her. She read perfectly. Mrs Jones was very proud of her daughter.

After the service, Mary rushed up to her mother. “I must have a Bible, I must have a Bible!” she cried. Her mother gently placed her hand on her shoulder. “But Mary, Bibles are expensive, and we haven’t much money.”

“But Mary, Bibles are expensive, and we haven’t much money.” – Mary Jones’ mother

“I know, I know, that’s why I am going to save up for one, and I don’t care how long it takes me. I’ll do jobs for other people and I’ll save all my pennies. I’ll do anything just to have my own Bible.’ Mary did just that. For six long years she saved all she could until the day came when she had enough money to buy a Bible. Mr Evans had told her that there was a man in a town called Bala who had a number of Bibles. Mary, now 15, told her mother that she was going to walk to Bala.

Her mother exclaimed, “That’s nearly 26 miles away!” But there was no changing Mary’s mind. So, with her purse of money and some bread and cheese tied up in a bundle, she set off.

The journey to Bala seemed endless. Mary followed many paths, crossed valleys and streams and found her way around hills. As her weariness grew and her aching limbs seemed almost too much to bear, she muttered words of encouragement to herself. “Come on, Mary, not much further now,” she thought.

Eventually she came to the brow of a hill, from which she could see the edge of a town. Dusk was falling, and candlelight had begun to flicker in cottage windows. Mary’s heart pounded with excitement. Here was Bala at last! She recognised it from Mr Evans’ clear description. With renewed energy and determination, she set off again down the hill.

“I’ve walked 26 miles to get here, I’ve saved up for six years to buy a Bible … please can I have a Bible?” – Mary Jones

Mary asked for directions to find Mr Charles. After knocking on several doors and asking for directions, she found his house. She ran up the garden path and knocked loudly on the large oak door.

As it was opened, Mary made her request for a Bible, the words tumbling over themselves in her eagerness: “I’ve walked 26 miles to get here, I’ve saved up for six years to buy a Bible, I’ve got the money here, you can count it if you like ‐ please can I have a Bible?”

Mr Charles was very moved by this request, but sadly all his Welsh language Bibles had been sold. He provided food for Mary, and arranged lodgings for her while he waited for more Bibles to arrive.

Two days later, he was able to provide Mary with a Bible of her own.

Mary stared at it for a long moment before taking it with both hands. She expressed her heartfelt thanks. Then Mr Charles did something that Mary did not expect. He gave her two more Bibles for her family to keep!

The next morning, Mary, clutching her treasured possessions, said goodbye to Mr Charles and started on her way home. She arrived to a grand reception. It seemed as if everyone was there. Her mother threw her arms around her. Nearby stood Mr Evans and the minister, smiling broadly and clapping their hands. Everyone was cheering and wanted Mary to show them the Bibles. As she held the books up, she murmured a few quiet words: “Thank you, Jesus; thank you, Mr Charles.”

They made this vision part of their campaign to “make goodness fashionable”.

That question, posed at a meeting of the Religious Tract Society on 7 December 1802, would reverberate across Wales and, ultimately, the world. It was the moment that set in motion the founding of the British and Foreign Bible Society.

Captured by the vision of God’s word being available for all people of the kingdom and wider world, William Wilberforce and other members of the Clapham Sect decided to do what they do best – they decided to act. They made this vision part of their campaign to “make goodness fashionable” – in the hope of inspiring people to fall in love with the Bible and a biblically inspired lifestyle.

On 7 March 1804, at a meeting of around 300 at the London Tavern in Bishopsgate, Wilberforce and the campaigning groups he was a part of formed the British and Foreign Bible Society.

Since that day more than 200 years ago, the British and Foreign Bible Society has become Bible Society – a charity committed to offering the Bible to the world.

The BFBS established local Bible Societies in 146 countries of the world, to undertake its work in their locations. In 2011, it celebrated the 400th anniversary of the King James Bible with cultural events across the country.

Today, it stand on the shoulders of those in its past who were committed to faithfully living out their belief that the Bible should be made available for every man, woman and child in the world.

Find out more about Mary Jones

“Every city needs a Mary Ann Dalby … the people’s friend.”

Nick Farr-Jones speaks up for Scripture in schools

Nick Farr-Jones speaks up for Scripture in schools