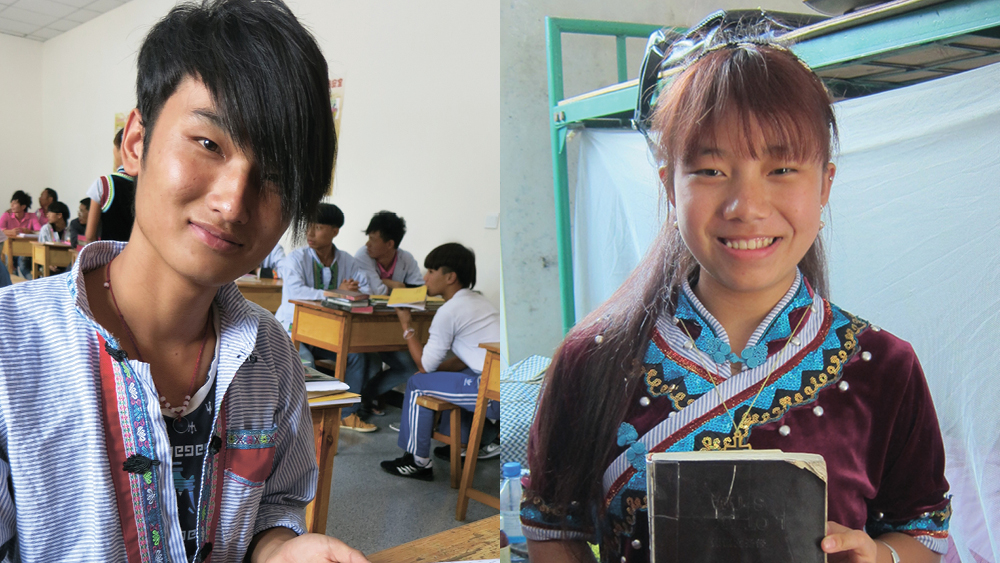 Bringing the word to the Lisu delivers literacy and life skills

Si Zhonghua is a young man from the West Lisu minority people group living in Nujiang Lisu Autonomous Prefecture in Yunnan province. This area of lofty mountains and roaring rivers in southwest China is bordered by Tibet in the north and Myanmar in the west.

It is estimated that nearly one third of the 650,000 Lisu people in China are Christians. Zhonghua joined their number when he came to Christ two years ago.

“There are some non-believers who are keen to learn too.” – Bo Yuanmei

“I was asking myself what the purpose of my life on earth was. Then one day, a preacher came to my village and told us about Jesus giving us eternal life and that the word of God is more precious than money,” he says.

Now, instead of loitering aimlessly on the streets like some of his peers, Zhonghua is devoting his time to learning to read the Bible in West Lisu script at a Scripture literacy class. He is eager to share his faith with others.

“I want to learn the West Lisu script so that I can read the Lisu Bible, gain more Bible knowledge and be able to share the word of God with others,” he says.

The conversion of the Lisu is one of the great stories of mission history. Six years after arriving in China, pioneering British missionary James Fraser, witnessed a breakthrough. Over a four-month period, 600 Lisu representing 129 families became Christians and followed Jesus, sparking an indigenous church-planting movement. Lisu believers led scores of other Lisu villages and families to Christ and today, there are an estimated 201,500 Lisu Christians in China.

When Fraser arrived in the early 1900s, there was no Lisu written script, so Fraser created an alphabet and later he and his team started translating the Lisu Bible. Today, the West Lisu script is usually taught at home and in churches, but there are still many who are unable to read in Lisu.

“In order to continue the work of spreading the gospel, building and strengthening the spiritual life of believers and passing down the Lisu language and cultural heritage, Scripture literacy is important,” comments Yu Yong Guang, a member of the West Lisu Annotated Bible translation team.

Another member of the Scripture literacy class, Bo Yuanmei, 19, says, “More than half of the believers in my church are elderly believers who do not know how to read the Lisu Bible. Increasingly, there are some Lisu parents who want their children to learn the Chinese language due to economic and practical reasons. After this class, I hope to be able to help other believers learn to read the Lisu Bible so that they can draw near to God through reading his word. There are some non-believers who are keen to learn too.”

In fact, non-believers who work in the Lisu language news media have been using the West Lisu Bible as their dictionary as it is the only written script offering a wide range of vocabulary. “Since seven or eight years ago, Lisu language news reporters and radio broadcasters have sought the help of Christians and consulted the Lisu Bible in their writing and reporting,” shared Rev. Li Moxi. “We are grateful to Fraser for creating the script and we are very glad that the script could help in the development of our society today.”

Approval has been given to the church in China to print 3.34 million Bibles

The majority of Christians in China live in rural areas and a high percentage of them are illiterate or semi-literate. For 2020, the Provincial Christian Councils aim to reach a total of 41,000 people in several provinces, including Yunnan and Shandong and Jianggsu, through literacy classes. As well as classes for Han speakers – mainly elderly people and women – classes will also continue for West Lisu, East Lisu, Miao, Wa, Jingpo and Hei Yi minority groups.

Support for the literacy programme is one prong of Bible Society Australia’s China appeal this winter. Another aspect is the purchase of Bible paper to help meet the huge shortage of Bibles in China. The church in China is growing faster than we can possibly imagine. Up to a million people are estimated to come to faith every year. And these new believers long to have a Bible.

Approval has been given to the church in China to print 3.34 million Bibles at Amity Printing Press in Nanjing. All that’s missing is funding for the paper.

You can also help train pastors from poor backgrounds, so they can attend Bible college and lead rural churches. Nationally, on average, there’s just one ordained Protestant pastor for every 6700 Christians – and many churches only get a visit from their pastor a few times a year.

Would you like to support Scripture literacy projects in China?