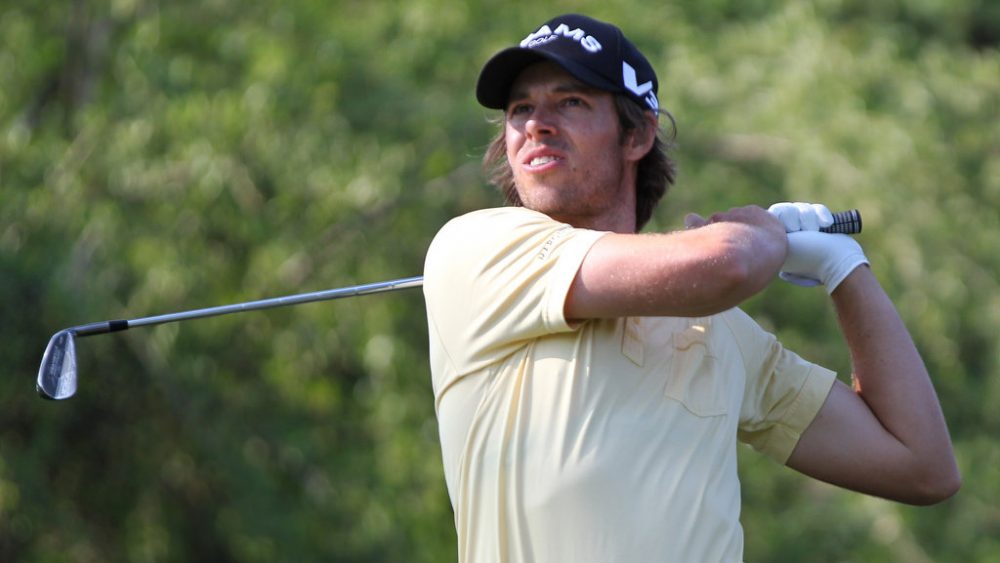 In-form Australian-American golfer Aaron Baddeley says he is 100 per cent sure that his best golf is ahead of him after surviving several fallow years when he had to cling on to his faith in God’s promises.

As a committed Christian, Badds, as he is known, confesses that he thought about giving up golf and going into ministry during the tough times, when he failed to live up to his own and other people’s expectations.

And he revealed that he meets every week for fellowship and Bible study with other Christian golfers on the tour such as Tom Lehman, Ben Crane, Bubba Watson.

“We meet on a Tuesday night at a hotel or house and have a night of fellowship and study God’s word,” he says.

“We would get between ten and 40 turn up typically, depending on the event. It’s a great time with the guys, some wives and people involved with the tour. A couple of teachers travel basically each week and teach us. Right now, we are going through the book of John.”

The PGA Tour has had an official chaplain who travels to each tournament and hosts Bible studies for the players and caddies for more than 30 years. Badds, who grew up in Australia but is now based in Phoenix, Arizona, hosts the Bible study at his home during the week of the Phoenix Open.

“I know this is the arena God has called me to.” – Aaron Baddeley

When he took the golfing world by storm in 1999, winning the Australian Open as an amateur while still a teenager, Badds declared that his aim was to be better than golf superstar Tiger Woods. However, in the following years, he struggled for consistency and came to be overshadowed by his Australian contemporary, Adam Scott.

Badds tells Eternity that his relationship with Jesus and trust in his plan for his life were the crucial factors in keeping him playing during an extended career slump that took him from a career high ranking of 17 in 2008 to 427th in 2015.

“I know this is the arena God has called me to and I’ll continue to play golf until he tells me it’s time to do something different,” he says.

“Work hard, believe and above all trust and pursue Jesus.” – Aaron Baddeley

Badds has always been a brilliant putter but he went through years when he struggled to perfect his swing off the tee. When he slumped so far that he lost his sponsor, Badds says his strategy was to hold on to God’s promises.

“With the Bible being truth we are able as Christians to stand and believe the promises God has for us,” he says.

“Like the plans he has for us are good, that all things work for the good of those who love God and are called according to his purpose. That in our weakness his strength is made perfect, that he gives us the ability get through any and all storms in our life – just to name a few.”

He would read and believe these promises when things got rough – “when life is relentless whether on or off the course,” says the father of five, who often travels with his family on the PGA tour.

A “breakthrough win” in 2016 of his first US PGA tournament in more than five years was a “massive” confidence booster, he says.

“Work hard, believe and above all trust and pursue Jesus.” – Aaron Baddeley

“I know and understand my game better now than I ever have and, with the experience I have gained over the years, I’m super-excited about the coming years,” he says.

Asked what advice he would give other Christian sports people trying to make it big, he says:

“Work hard, believe and above all trust and pursue Jesus. God says in his word, seek first the kingdom of God and his righteousness and everything else will be added unto to you.

“Make your relationship with Jesus number one in your life – reading, trusting and obeying his word – because he loves you more than you could fathom. His plans for you are good!

”In addition, work hard at your game. Leave no stone unturned. There are no guys or girls on tour who haven’t worked hard.”

Making a lot of promises

Making a lot of promises

Greg Clarke on keeping our word