Beloved Australian gynaecologist Catherine Hamlin died yesterday at her home in Ethiopia, aged 96. Hamlin was renowned for her service to Ethiopian women and their communities, through the pioneering work of the Addis Ababa Fistula Hospital that she founded with her husband Reg in 1959.

Last year, Eternity‘s Kaley Payne detailed the life, legacy and faith of Catherine Hamlin, on the 60th anniversary of the Fistula Hospital.

Sixty years ago this week [June 3, 2019], gynaecologist Catherine Hamlin left Sydney and travelled to Ethiopia with her husband Reg. They were supposed to be there for three years. It became a lifetime of service.

This week, the Addis Ababa Fistula Hospital celebrated the legacy of the Hamlins, and their pioneering commitment to Ethiopian women in working to eradicate obstetric fistulas. Dr Catherine Hamlin, now 95, still works in the hospital she founded with her husband Reg, who died in 1993.

The Catherine Hamlin Fistula Foundation estimates that 60,000 women have been treated and cured of their fistula injuries thanks to her work and that of her surgical team.

Obstetric fistulas are caused by lack of blood supply to the tissues of the vagina and bladder (and sometimes, the rectum) during prolonged, obstructed labour, leaving a hole through which urine and faeces pass uncontrollably. The condition has been all but eradicated in developed countries, where women usually have children in adulthood and medical treatment is more readily accessible. In sub-Saharan Africa, many girls become pregnant before the age of 18 and have to labour unaided before their bodies are mature enough to give birth.

“The girl is given back to her parents, back to her old village, where no one understands what has happened to her.” – Catherine Hamlin

Five per cent of all women have an obstructed labour, whether they’re Ethiopian or Australian. The difference is, in Australia help is readily available to correct the position of the baby or to have a Caesarean section to deliver the baby safely.

A statue of Dr Catherine and Reg Hamlin was unveiled as part of the 60th anniversary celebrations of the Hamlin’s arrival in Ethiopia. Catherine Hamlin Fistula Foundation

The World Health Organisation estimates that 50,000 to 100,000 women worldwide are affected by obstetric fistula each year and more than two million young women live with untreated obstetric fistula in Asia and sub-Saharan Africa.

When Ethiopian Prime Minister Abiy Ahmed visited the fistula hospital as part of last week’s 60th anniversary celebrations, he unveiled a large statue of Catherine and Reg Hamlin and presented Catherine with a prestigious citizenship award.

Dr Hamlin and her husband were both obstetricians and gynaecologists and travelled to Addis Ababa, Ethiopia’s capital, with the Ethiopian government to set up a midwifery school in 1959. There, the couple encountered their first fistula patients.

When Eternity spoke with Catherine Hamlin in 2014, she recounted this story:

A teenage Ethiopian girl says goodbye to her husband in the morning as he goes off to work. She tells him when he gets home that night they might have a baby. She’s started to get pains. She lies in her hut all day, but nothing happens. The next day too, there is still no baby.

In Ethiopia, women are often deprived of food or water during their labour. The girl becomes dehydrated, perhaps slipping into a semi-coma as she labours for another two days. Still no baby. In and out of her home are her mother and maybe a traditional birth attendant (TBA), who are in some of the Ethiopian villages – they have some training, but not enough to understand or tell the girl what’s going on.

After two days of strong labour, an unborn baby will usually die; the placenta starts to separate and the baby is cut off from oxygen. The girl can feel that the baby has stopped moving. She knows it is dead. Once the baby dies, it gets smaller within the woman and it’s skull bones get soft. Finally, the young girl is able to deliver the stillborn.

If she doesn’t die from septicaemia – a common occurrence when a stillborn remains in the body for too long – the girl, exhausted, sleeps. She wakes up to the horror of finding her bed soaked in urine. She remains in this state not knowing it is not temporary. She thinks that if she keeps very still, it will dry up.

Her husband comes home and asks why she doesn’t get up. He’s not cruel, but he can’t manage now that she’s leaking urine. The girl is given back to her parents, back to her old village, where no one understands what has happened to her. She can’t control the leaking. She’s placed somewhere to live on her own – a little shack somewhere away from the main village. Hidden.

Reg Hamlin died in 1993, but Catherine continued their work. The Addis Ababa Fistula Hospital, opened in 1974, was the world’s first modern specialised fistula treatment centre. In 2007, Catherine Hamlin opened the Hamlin College of Midwives, providing midwives to remote areas of Ethiopia in an effort to prevent fistula cases from occurring.

“A little peasant girl is precious in God’s sight, and so they’re precious in my sight too.” – Catherine Hamlin

Catherine Hamlin comes from a Christian mission-focused family: “I had a great aunt who started a mission in the Solomon Islands. Another one went to China.” 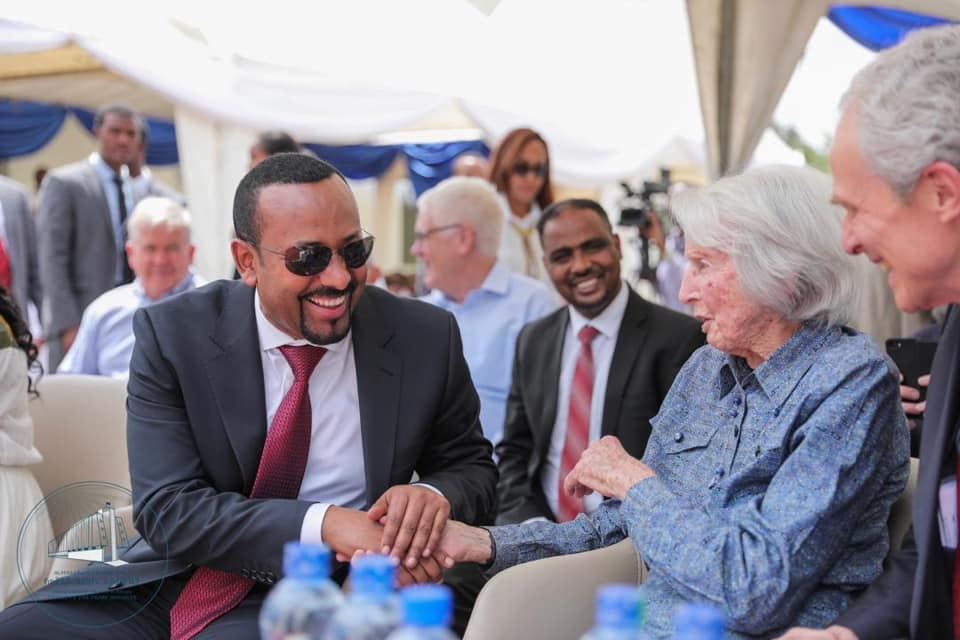 But she is uncomfortable with those who would call her a missionary. “I don’t actually do a lot of mission work, but I hope I live a life that shows that I love the patients and that they would recognise that I have a Christian faith.”

The New York Times crowned Dr Hamlin “the 21st Century Mother Teresa”. But Dr Hamlin told Eternity in 2014 that the label was “rather embarrassing”.

“I do have influence there [in Ethiopia], because I’ve been there so long. And I do genuinely feel love for every patient. A little peasant girl is precious in God’s sight, and so they’re precious in my sight too.”

In a recent episode of its Life and Faith podcast, the Centre for Public Christianity spoke with Andrew Browning, who has spent 17 years in Africa as a missionary doctor, and worked with Catherine Hamlin at the Fistula Hospital in Addis Ababa. You can listen to that episode here.

The ‘Catherine Hamlin’ will serve Sydney from January

John B. Goodenough is the father of the lithium-ion battery, the rechargeable power source inside…