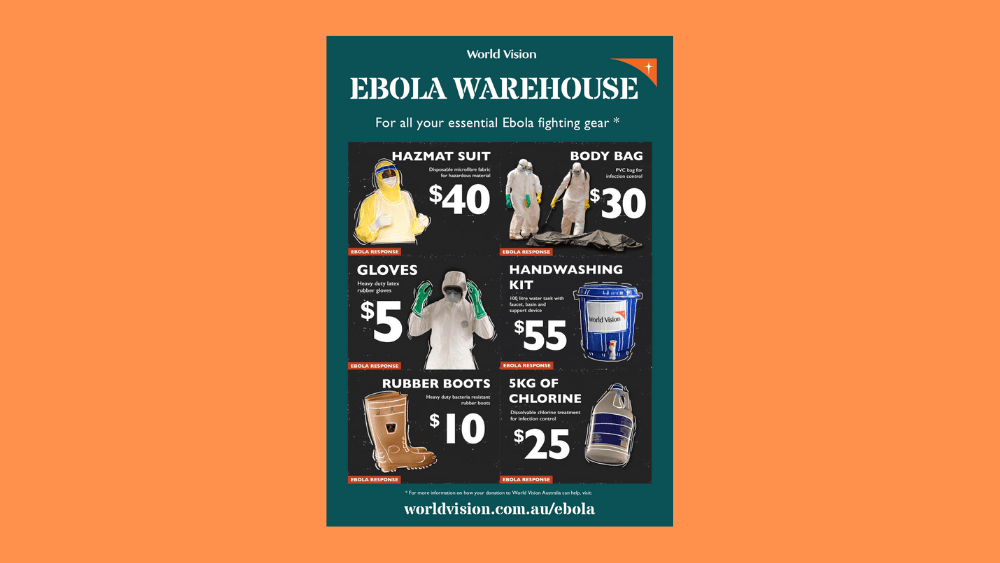 World Vision has set out to shock Australians into acting on Africa’s escalating Ebola crisis with a grim new catalogue that features body bags and Hazmat suits.

In a radical departure from fluffy chickens, goats and bicycles that are offered as Christmas presents, the confronting limited-edition catalogue offers items that would not look out of place in a forensic investigation of a murder scene.

That’s because disposable hazmat suits, gloves, handwashing kits, rubber gloves and chlorine are essential to stopping the spread of the fearsome disease, which is transmitted through bodily fluids and human contact and carries a 67 per cent fatality rate. Even burials have to be conducted by people wearing protective gear.

“I make no apologies for telling it how it is.” – Claire Rogers

World Vision Australia CEO Claire Rogers warns that with more than 70,000 Australian tourists travelling to Africa each year, it “only takes one person hopping on a plane with a bit of a cough to infect a population. Ebola knows no borders.”

But she says Australia should not wait until Ebola reaches our shores.

“I make no apologies for telling it how it is – this represents some of the gritty work which World Vision and other humanitarian agencies do in some of the toughest places on earth.

“If you buy an item from the catalogue, your funds will go directly to fighting Ebola. We hope this will be a limited-edition catalogue.”

World Vision communications specialist Brianna Piazza came back two weeks ago from Beni, the epicentre of the outbreak in the Democratic Republic of Congo, and in Goma in the east of the country as the first cases appeared there.

With 90-100 cases presenting each week and more than 2000 deaths since August last year, this latest outbreak “is shaping up to be the second worst,” she says.

In DRC, Piazza’s role was to connect with beneficiaries, survivors and affected children in order to to raise the profile of the situation in the DRC and “raise some much-needed funds for the DRC because the crisis is ongoing. It’s been more than a year now and, unfortunately, we’re not seeing a drop in cases. So, we need more mobilisation and support there.”

“Pretty much every survivor I spoke to said they’ve never felt any pain like Ebola in their whole life.” – Brianna Piazza

She says the cases that struck her while she was there were the women and teenage girls who had survived, whose suffering did not end with their recovery.

“Pretty much every survivor I spoke to said they’ve never felt any pain like Ebola in their whole life, so it’s really terrible time for them and even when they survive – which is only a one-third chance – and leave the treatment centre, they go back to their communities, but there’s still a lot of misunderstanding and fear about Ebola and some people think that survivors can still spread the disease, that they’re still contagious, even though we know that’s not the case,” says Piazza.

“One woman had her relatives abandon her, unfortunately. And there was a 15-year-old girl, Sarah, who survived, but there are kids in the neighbourhood who won’t come and play with her anymore because they’re scared to be near her. But she’s just got the most positive outlook on life and she’s finishing her studies because she wants to become a nurse so that way she can help patients in future.”

Piazza says many of the survivors want to come back and help at the Ebola Treatment Centres because they want to see the end of Ebola in their communities.

“So even though Ebola has this terrible effect on people, in a way these terrible experiences shape you and they take the best out of this situation,” she says.

While a survivor may not be medically trained or qualified, often women who are mothers will come back and care for the babies in the nursery of the treatment centre.

“They’re the perfect candidates to be able to care for the babies whose parents are being treated for Ebola, as they wait to find out if the baby is contagious or has the disease or not, because they’re not going to infect the child but the child still needs caring for – you don’t want to put other people in the community at risk – so there’s definitely opportunities there and it’s such a great example of getting local communities and survivors get back on their feet and find a purpose after going through so much.”

Survivors are also joining the efforts to break the chain of transmission is by going back to their communities and raising awareness of the signs of the disease, how to prevent it and what to do when symptoms emerge.

“Even though it’s a French speaking country, a lot of towns in the north don’t speak French but they speak dialects or they have their own languages, so it’s ideal that when you have a survivor who does speak one of those languages that they can connect with the community,” says Brianna.

“So we’re trying to get those messages out there, essentially using trusted people in those communities.”

“The people of the DR Congo – and the world – need Australia to step up again to do our share to stop Ebola in its tracks.” – Claire Rogers

The terrifying illness has torn apart families and left more than 1300 children orphaned, and many more suffering distress, fear and anxiety, says Rogers, adding that children’s lives have been completely disrupted.

“Families have had to move to different towns and cities due to the stigma survivors face, creating an unstable home and school environment. Teachers have said that student’s marks are slipping as children struggle to concentrate – or drop out of school completely, particularly those who have been orphaned,” she says

One school lost up to 20 per cent of students as families moved out of the area due to the stigma of Ebola.

“The people of the DR Congo – and the world – need Australia to step up again to do our share to stop Ebola in its tracks. Australia has for years ignored the people in the DR Congo – who also suffer violence, political instability and mass displacement,” Rogers says.

“We know that the Department of Foreign Affairs and Trade has released $2.5 million towards the Ebola response, but it’s not enough. We must urgently match Canada’s contribution of AU$35 million to the DR Congo humanitarian response to stop this frightening outbreak.”

To sign a petition calling the Australian government to boost its contribution to the international Ebola crisis in the DR Congo or donate to World Vision’s humanitarian response here.