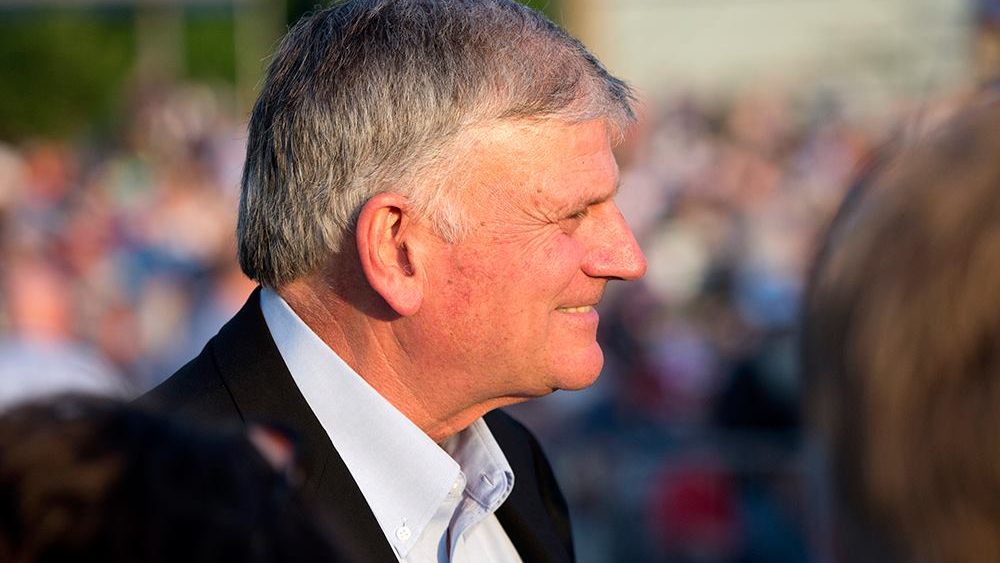 Would you go to hear Franklin Graham?

Donald Trump gets in the way

Franklin Graham, a preacher like his father Billy, is touring Australia in February 2019. Will he gather a crowd, or will Donald Trump and US politics get in the way? Two prominent Aussie Christians have very different views about whether to get behind the Franklin Graham tour.

KARL SAYS: THIS WON’T BE ABOUT POLITICS, IT’S JUST ABOUT JESUS

I have personally known Franklin Graham for more than 20 years. What I know of Franklin from personal conversations and involvement in both Samaritan’s Purse and the Billy Graham Evangelistic Association – Australia, is that he is deeply committed to the gospel message – the life, death and resurrection of Jesus available to everyone. Just like his father, he is passionate about sharing that message by any means possible.

Australians can be confident that this is not about politics but a commitment to sharing the message of Jesus as clearly and broadly as possible.

Franklin Graham has been outspoken in his concern for American society and for the direction it was heading. Before the 2016 election, Graham called for people to vote for candidates who would best represent Christian values. His positive response to the election of Trump was not an endorsement of Trump’s character but rather supporting the candidate who would uphold Christian values in American society in a way that the previous administration had not. In particular, Graham and many other Christian leaders encouraged voters to endorse a candidate who would appoint Supreme Court judges with conservative Christian values. It is an outcome that will impact the US for the next generation.

I have heard Franklin Graham speak at events such as these around the world, and have seen God use him to bring thousands to a saving knowledge of Jesus. I am confident that the events being planned across Australia in 2019 will be marked by three key qualities: a clear gospel message, a series of fabulous meetings and a politics-free agenda.

Australians can be confident that this is not about politics but a commitment to sharing the message of Jesus as clearly and broadly as possible. We should all be praying, be involved and invite friends and family to join us.

I am a big supporter of the Billy Graham Evangelistic Association, I have friends and family who came to faith through Billy Graham’s ministry, and my family and I have routinely put together the Christmas shoeboxes for the charity Samaritan’s Purse. However, I think inviting Franklin Graham to tour Australia will be counter-productive because Franklin Graham has been hyper-partisan in his support of President Donald. He has repeatedly tried to mitigate Trump’s un-Christian behaviour and asked Christians to overlook Trump’s attitude towards women. Yes, I know that Franklin Graham did oppose things like Trump’s border policy, but on the whole, Graham has been a vocal and energetic supporter of Trump and even appealed to Trump as a God-sent figure (where Trump sits in relation to God’s providence is a conversation for another day).

Look, I have no problem with an American friend who supports Trump or voted for Trump – many of my American friends did – the problem is that Franklin Graham has tethered his own reputation and ministry to the Trump administration. Graham the younger’s “Decision Tour” of California was an unhealthy mixture of gospel proclamation and pro-Trump support as if the two belonged together. The Faustian pact of providing Trump with religious capital in exchange for political influence and pro-Christian policies is a short-sighted game that will haunt American evangelicalism in the long term.

If Franklin Graham is hosted in Australia it would entail that we support the particular brand of Christianity that Franklin Graham represents. And that is – to be frank – a version of Christianity which I am very reluctant to tether my own witness, ministry, and reputation to. I mean for the love of Vegemite and avocado, Aussie evangelicals have enough problems in Australia being portrayed as religious extremists who fantasise about being the theocrats in some kind of Handmaid’s Tale dystopian regime, the last thing we need to do is to invite Donald Trump’s main religious cheer leader. It will give our critics a big, big stick to hit us with.

I would love to see the BGEA send a gifted speaker to Australia to preach to the churches and to commemorate ’59. In my mind, a better option would be Franklin Graham’s son Will Graham, who has already visited Australia, and does not have the partisan reputation of his father.

PS. Let it be known that I am willing to change my verdict on Franklin Graham if he can persuade Chik-Fil-A to open up a store in Doncaster, Melbourne! I really, really love their chicken burgers!!

‘I am not my dad. I am not Billy Graham. But I preach the same gospel’

Jesus the Game Changer, a video series hosted by Aussie Baptist Karl Faase, is the…

Franklin Graham’s tour of Australia has wrapped, ending a 16-day, six-city itinerary in Sydney on…