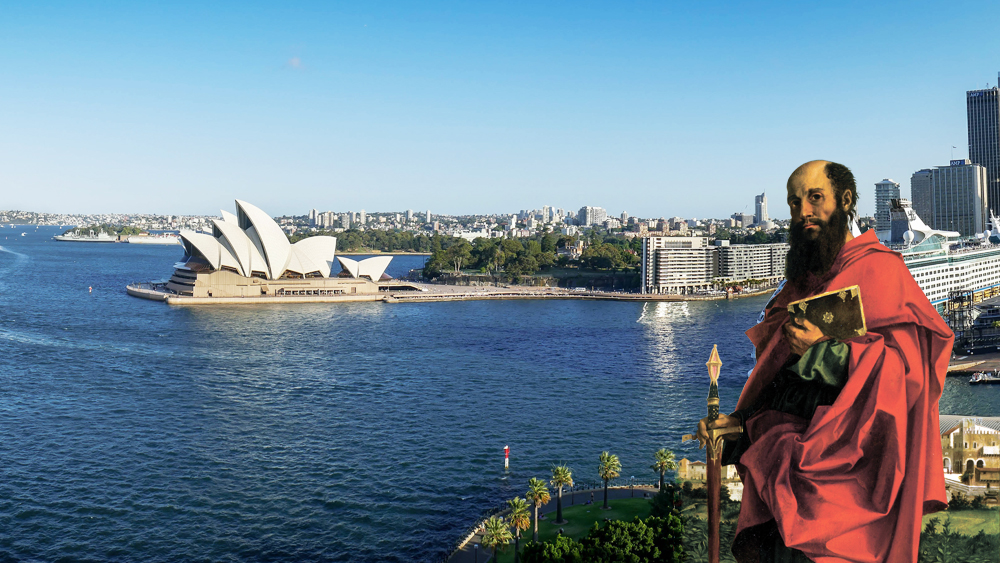 LISA ELLS: Paul the Apostle, once called Saul of Tarsus is on the Australian leg of his global tour. He joins me now in Sydney. Paul, thanks for coming on This Morning.

PAUL: Pleasure. Good to be with you.

INTERVIEWER: Recent statistics show that the faith you’ve founded is losing ground in Australia. Does that concern you?

LISA ELLS: You’ve been called the founder of Christianity. Recent statistics show that the faith you’ve founded is losing ground in Australia. Does that concern you?

PAUL: Now, I’d never call myself “the founder” of Christianity (which is a word I’d never use, by the way). That’s simply not true. The particular mission I had was to take the gospel of Jesus Christ to the non-Jewish world in the West. But I wasn’t the only one to do that.

LISA ELLS: OK, but are you concerned that Christianity is failing in Australia?

PAUL: Very much so, but perhaps not in the way you’re saying. For many people, Christianity has become something you attached to your cultural heritage – a matter of festivals and holidays, if you like. So, if you’re Greek, you celebrate Easter at such and such a time, and if you’re Italian or Irish or English, you celebrate it at another time.

But culture and true faith aren’t the same at all, and in fact the minute we make our culture and our faith the same thing we run all kinds of dangers, we do all sorts of damage, because we think that God is Jewish, or English, or Greek. It’s tribalism, really, so I want to fight against that everywhere I see it.

LISA ELLS: But does that explain the failure of the church in modern Australia?

PAUL: Well, that’s a huge question, and I’ll get to that – partly, we shouldn’t assume that it’s a failure, not just yet. But see, the numbers of people who say, no, I am not a Christian, are growing because it’s become less usual in Western societies for people to think of their society as a Christian society, whatever that is.

But actually, I don’t mind that, because I don’t think that is true Christianity anyway. That’s a kind of faith by inheritance, or, a genetic view of what religion is.

“I’m a Christian because I am born that way, that’s my genetics.” People used to think – I used to think – of myself like this. I was a Jew because I was circumcised, and born of the tribe of Benjamin and so on. But now I think of that as a terrible way to think about faith in God; it doesn’t work, not at all. You don’t belong because you’re parents belonged.

At the heart of the Christian message is the idea of being adopted into God’s family, by faith. So if the numbers are falling that’s no bad thing if what we are seeing is a realisation that you can’t be a Christian just because of your cultural background. Christianity is multi-cultural, not monocultural.

PAUL: If the numbers are falling that’s no bad thing if what we are seeing is a realisation that you can’t be a Christian just because of your cultural background.

LISA ELLS: But still, surely, the falling in church attendance can’t be what you want to see? That’s got to mean less influence, culturally and politically? And this at a time when Christian churches are being criticised for their responses to child abuse, and for their attitudes to women and gay people?

PAUL: I want to see more people believe in Jesus Christ, sure. The churches? Well, yes, they’ve got a lot to be ashamed about. What can I say? It weighs heavily on me. I was urging the Corinthians to clean up their act in the 60s AD. They were a basket case, really; it was extremely painful and disappointing.

But we had no influence back then and it was probably a good thing, because having cultural and political influence isn’t the point anyway. The loss of influence might actually lead to a leaner and truer church, one that looks more like Jesus Christ. One thing the churches have to learn is that if they believe that a guy rose from the dead, then really they don’t need to worry about political clout. They’ve got it already, if you see what I mean.

LISA ELLS: But the churches have all those schools and hospitals still, and they accept government funding. What about those?

PAUL: We never had those back in the first century! But we were committed to healing and to learning. We were trying to build communities of people who believed in learning about God from the writings, and who believed in care for the sick and the poor. So I can see where these institutions came from down the centuries since; it’s kind of a natural way for these things to go.

But still, they’re not the point of the Christ thing. When they become institutions, they tend to lose sight of the faith that generated the desire to help and they become big systems. But why did they start in the first place? What happened to that original desire that drove it? I want to get back to that. I think that’s what Australia needs and the churches need right now.

LISA ELLS: So what’s your programme for change? Do you think the bishops and pastors will welcome you with open arms? The Anglican Bishop of Wagga Wagga has reportedly commented that he doesn’t want to see a Christianity that is “more Pauline,” saying that, in his words, “the church should stick to the teachings of Jesus, not Paul.”

PAUL: I am only here to promote Jesus – it’s not about brand Paul, as if there was such a thing.

PAUL: I wouldn’t want to argue with the bishop, on the face of it. I am only here to promote Jesus – it’s not about brand Paul, as if there was such a thing. Unless he’s suggesting that there’s a contradiction between Jesus’ teaching and mine, because I’d dispute that with all my heart.

LISA ELLS: Isn’t Jesus more about a message of love, but your preaching was more fanatical, more about the rules?

PAUL: I am not sure even where to begin with that question. Have you read Jesus’ teachings?

LISA ELLS: I went to Sunday school, sure.

PAUL: Look, all I can say is: if there’s a difference between Jesus and me it comes from the situation. I was writing to young churches that were living in the Greco-Roman world – Ephesus, Corinth, Rome. Jesus was teaching Jews in Israel. So, we covered different subjects, sure.

LISA ELLS: So what does the Australian church need to do to halt the decline?

PAUL: It needs to pay more attention to Jesus Christ. It may still decline in numbers anyway. Probably will. But it will be more healthy if it’s more Jesus-like. It won’t be more popular though, because mostly people want churches to be nice. It’s not our job to be nice, or to be relevant, or to get with the times. That’s what I’m here to say.

LISA ELLS: Well it will be fascinating to see what comes of it. Apostle Paul, thanks for joining us.

How to tell family and friends about Jesus at Christmas

How to tell family and friends about Jesus at Christmas

‘I am not my dad. I am not Billy Graham. But I preach the same gospel’