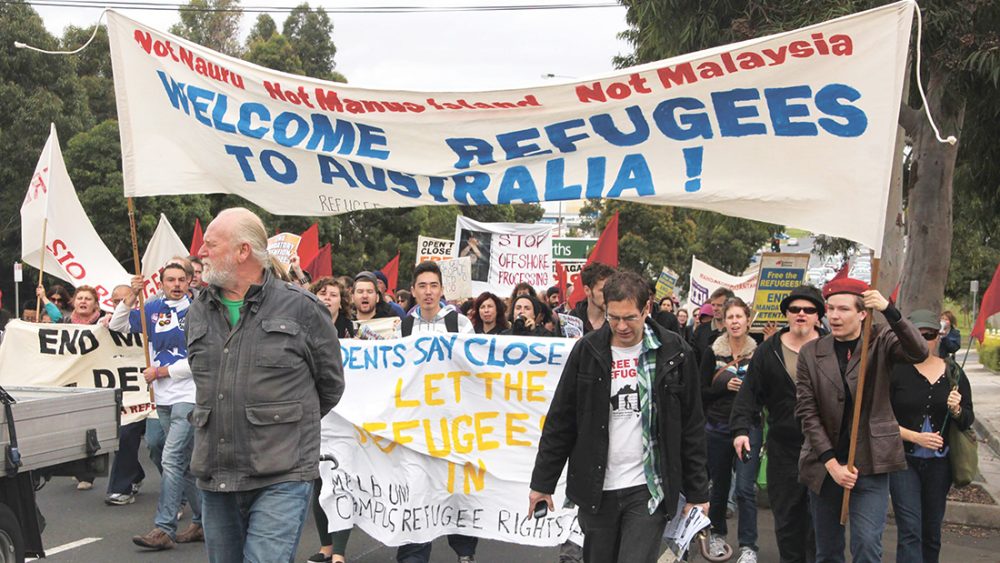 Our approach to refugees might cause them to see themselves as investments needing to prove their worth.
Flickr/Takver License
Opinion refugees

Refugees are our equals

If, during Refugee Week, I hear yet another refugee success story, I will both cheer loudly and silently wince.

You know the kind of tale. The hero of this story goes from stateless, persecuted outsider to welcomed, included citizen: the successful refugee. They extol the virtues of their host nation and are profoundly grateful for the many opportunities it has afforded them. They declare their intention to gladly give back to the nation from which they so generously received.

Refugees must prove … that they weren’t a bad investment.

It’s not the story that is the problem – Deng Thiak Adut’s path from child soldier to human rights lawyer, and the opportunities Australia has afforded him along the way, is well worth celebrating. My issue is with the way such stories often unwittingly reinforce the expectation that the refugee must make good in order to justify their costly welcome by the host nation. Refugees must prove, in other words, that they weren’t a bad investment.

Refugee Week’s laudable aim to showcase the “positive contribution” refugees make to Australian society can actually play into this cold calculus. It’s hard to avoid the implied logic: we should invest in others because it will eventually pay off.

Not surprisingly, this unspoken demand to have been worth the effort generates a fair bit of resentment – even amidst all that gratitude. Just ask Iranian novelist and refugee Dina Nayeri, who granted intimate insight into this complex dance of emotions in a blistering write-up in The Guardian recently. She is both genuinely grateful for the opportunities she has been afforded by the United States, her host nation, and yet also angry that she feels a constant pressure to prove how thankful she  for them.

… they are forever dependent on the generosity and tolerance of their host.

“Despite a lifetime spent striving to fulfil my own potential, of trying to prove that the west is better for having known me, I cannot accept this way of thinking, this separation of the worthy exile from the unworthy,” she writes. And yet Nayeri still marvels at how deeply she has internalised the demand to be grateful: she often feels a spontaneous urge to bow and scrape before airport immigration officials for welcoming her back into America.

The problem, as Nayeri sees it, is that the refugee is never fully embraced by the host nation. She is not seen as an equal, since she has to deserve her welcome. Among those who only ever think of themselves as the “host,” she will only ever be seen as the guest. The guest always loses out in this dynamic – they are forever dependent on the generosity and tolerance of their host.

And as she makes clear, gratitude entrenches this imbalance of power because it serves to allay any resentment or unease at the refugee’s presence. Thankfulness reassures the host that the refugee’s success was only possible through their benevolence, and so ensures the continuing favour of the host.

In short, Dina Nayeri forces us to see her as an equal.

Nayeri’s rage gives voice to those we aren’t accustomed to hearing from: the “ungrateful” refugee, as The Guardian dubbed her. Strictly speaking, though, that’s not quite right. It’s not that she’s unappreciative; it’s just that she insists that “a person’s life is never a bad investment” and that, consequently, “there is no debt [for the refugee] to repay.” In short, she forces us to see her as an equal.

That provokes the question: if she is just like us, then wouldn’t we also chafe against the silent, but insistent, demand that we earn our place in the nation – as well as the need to have to continually voice our thanks at being given the chance to do so?

This kind of question is confronting, and made more so by the fraught state of refugee politics in this country. But can we imagine a way to recast the host-guest relationship along more equal lines? That shouldn’t be too hard for Christians – God’s reminder to the Israelites to love the foreigners among them was based precisely on the fact that they themselves were aliens in Egypt. Perhaps recognising our own strangeness is what allows us to unconditionally welcome the stranger among us.

Think of the sting in the tail of Jesus’ parable of the Good Samaritan.

Such recognition is by no means a syrupy affair, but more likely to provoke a visceral reaction. Think of the sting in the tail of Jesus’ parable of the Good Samaritan. Not only does the teacher of the law have to contend with the fact that true neighbourliness knows no boundaries of race, ethnicity, religion – or worthiness, we might add – the teacher also has to confront the fact that in this he has something to learn from the despised Samaritan other.

Such an imaginative leap that puts both on an equal footing with each other would have required the teacher to face the other, in all their humanity, and not as a faceless member of a scorned group. He would have to make room for the other in his heart – a humiliating prospect!

Christians have the power to imagine better.

And yet such a challenge awaits anyone committed to living the Christian life. David I. Smith writes that being a Christian involves giving up a self-sufficient identity: “To be a Christian is …
not to reserve for oneself the role of the host, the one who sets the table, but to learn to see Christ in others, to receive correction from them, to be joined to them, to learn from the stranger.”

Hosts and host nations, in this redemptive vision, cannot afford to remain as “hosts” without being open to some kind of transformative encounter with difference, without learning from their “guests.” They cannot expect to extract a sum paid out in achievements or grovelling thanks over a lifetime.

In a world dominated by relationships of exchange, calculation, and the desire to make a good return on investment, Christians have the power to imagine better. Full-bodied embrace of the refugee other is not just about letting them into the country (and that’s if we let them in at all) and offering them a chance to deserve their “place in the sun.” It’s also about recognising them as our equal, and giving them their place in our hearts and lives.

Dr Justine Toh is Senior Research Fellow at the Centre for Public Christianity. For more print, video and audio material go to www.publicchristianity.org

More from Justine Toh at CPX

"I could have been a street kid ... but God had other plans"