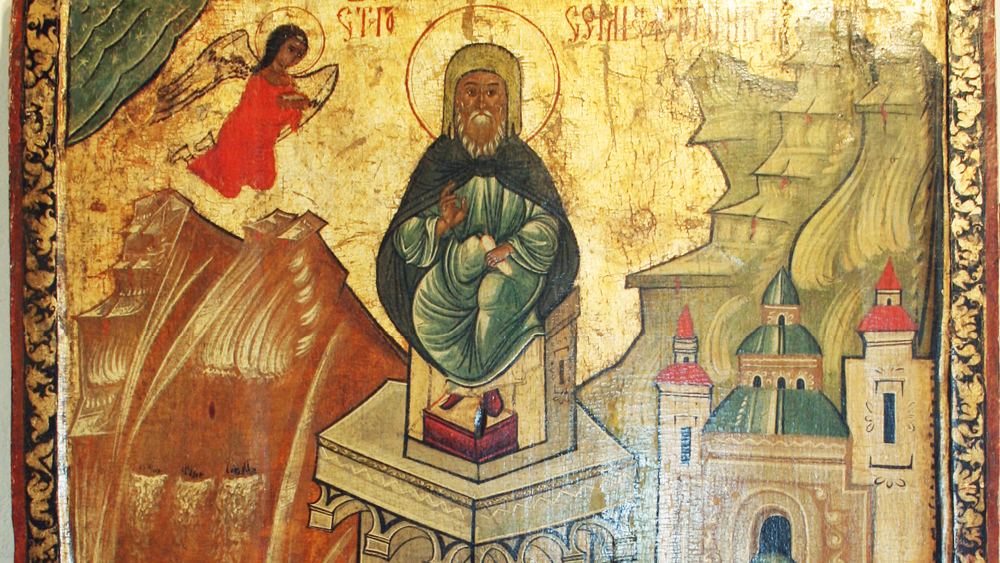 St Simeon Stylites, who sat on top of a pole for 40 years, actually has a lot to teach modern Christians.
Wikipedia / Przykuta License
Opinion church

Lessons for the ‘decadent and half-hearted’ from one fanatic

I am afraid to say that the half-heartedness and decadence of Christians in our day is one of the greatest obstacles we have to mission in Australia.

Maybe what we need is for someone to show us what following Christ is like by sitting on a pillar for 40 years.

Living out the gospel of Jesus Christ takes people in many different directions. But none have been quite as bizarre as St Simeon Stylites.

Out of his devotion to Christ, Simeon (c. AD 390-459) lived on top of a pillar near Aleppo in modern Syria.

He was born in the town of Sis, in what is now Turkey but was in those days a Roman province called Cilicia. After the Emperors of Rome had converted to Christianity, Christianity had become quite popular and even widespread.

“Christians themselves seemed to become more decadent and uncommitted.”

It was the end of the age of martyrdom. No longer were the Christians a battle-hardened, persecution-scarred group who could point to the heroic deeds of the martyrs as proof of the power of the gospel of Christ. What’s more, now that the church had become socially acceptable and not a radical underground sect, Christians themselves seemed to become more decadent and uncommitted.

In the Eastern part of Christendom, in Syria and in Egypt, these conditions led to the rise of monasticism. There were communities of monks living in the desert.

As a young man, Simeon was converted by reading the Beatitudes. Before he was 16 years old, he entered a monastery. There, he practised such a severe self-discipline that the other monks asked him to leave – he just wasn’t suited to community life.

So off he went, and shut himself in a hut for about 18 months. After this he sought a place in the desert to call his home. But the crowds kept coming to see him, such was his fame for his feats of endurance. He was unable to keep to his own desired regime of devotions.

The solution? Simeon would live on top of a pillar. This was a pillar left among the ruins in the city of Telanissa. He formed a small platform on the top, and there he stayed in the hot Syrian sun and in the bitter Syrian cold.

His disciples would climb up and give him what little food he determined to live on.

His first pillar was not more than a couple of metres high. But later on, he moved to a pillar that was more like 15 metres above the ground. The platform on top was believed to be little more than a square metre.

He would pray all night, bowing as he did so. There was a witness who counted 1244 bows one night. After a brief rest, he would be ready for the pilgrims who came to visit him from all around the known world. In the afternoons, he would be available to talk to visitors, who scaled a ladder to ask him questions. He taught his disciples and he gave sermons. Even though he himself was an extreme ascetic, he was known for his common sense and practical everyday advice.

“The more I think about it, the more I wish we had a few St Simeons in modern Australia.”

It was said that Simeon kept himself anchored to the pillar with a very rough piece of rope. After a while, the rope gave him a gaping wound. The wound started to rot, and became infested with maggots. When the maggots fell out, he would pick them back up and put them into his wound again, saying to them “Please eat what the Lord has given you.”

Remarkably, Simeon lived to the age of 70 or so, and by the time he died (found in the posture of prayer) he had spent close to four decades on the pillar.

I’ve always regarded the story of St Simeon as a rather pathetically unnecessary case of fanaticism. The gospel of Jesus Christ – the gospel of free grace – does not demand from us this kind of self-denial. In fact, the obsessive rigour and austerity flies in the face of the New Testament’s insistence that ascetic rules do not make us more spiritual (Col 2:16-19, 1 Tim 4:1-3) – and, in fact, can lead to spiritual pride. Likewise, asceticism can give the impression that the things of this world are somehow tainted.

And yet, the more I think about it, the more I wish we had a few St Simeons in modern Australia. According to the world’s values, Simeon was stark raving bonkers. Nutty as a fruit cake.

But if you know the grace of God in Jesus Christ, then what could be a higher calling or a more reasonable thing to do than to give yourself wholeheartedly to prayer? The call to discipleship is a call to detach ourselves from worldly things – not because they are bad necessarily, but because they absorb our attention in a disorderly way. They take our focus from God, and we buy into a narrative of our lives that is dictated by our surrounding culture: I must be married, I must have overseas travel, I must eat out at restaurants all the time, I must have a fulfilling career, I must be a significant person.

“Prioritising our lives according to Jesus may mean doing things that are, from the outside, completely nuts.”

Following Christ does mean renouncing things when they get in the way. And prioritising our lives according to Jesus may mean doing things that are, from the outside, completely nuts.

I can think of two contemporary Simeons. One is Sophia Cameron, a member of our church who gave up a teaching career in a prestigious private school in one of the richest parts of Sydney to go and train teachers in Nepal. She doesn’t get to eat a lot of avocado on toast where she is. And I don’t think it’s been great for her social life. It’s a tough place to be.

The other is my friend David Bennett, the author of A War of Loves: The Unexpected Story of a Gay Activist Discovering Jesus. David is one of four friends I have who experience same-sex attraction and yet have determined to live a celibate life because they believe this is what Jesus is calling them to in Scripture. David is renouncing what most of us feel is fundamental to our personhood and experience of life. And yet he says: this is nothing compared to what I have in Christ.

But our temptation is to see Simeon or Sophia or David as extraordinary cases of Christian discipleship. And yet, they are just examples for the rest of us to imitate in our own circumstances. You may not be called to sit upon a pillar or to move to Nepal. Yet you are definitely called upon to have Christ first in your heart and to put aside the things of this world.

“We spend more on coffee than we do on Jesus.”

As I said before, forget the so-called “culture war”: it’s the decadence and half-heartedness of us Christians that is the biggest obstacle to the gospel in Australia.

We Christians are spending pots of money on our luxuries and throwing our loose change into the plate at church. We spend more on coffee than we do on Jesus.

It is now completely acceptable, it seems, for Christian couples to cohabit before marriage. We’ve signed up to a culture war on gay sex, and yet we are completely cool with heterosexuals doing whatever.

Fewer and fewer people are signing up for vocational ministry or the mission field.

These are just three areas in which we once again need the witness of a Christian like Simeon.

Are we a persecuted people?

Are we a persecuted people?

Show notes for episode 16 of With All Due Respect