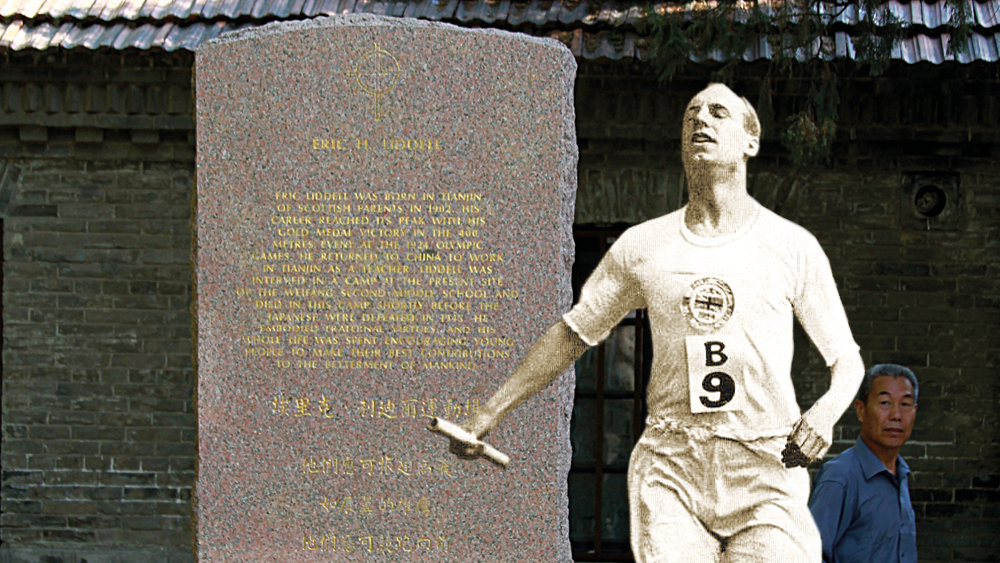 Michael Jensen on what we do

“I believe that God made me for a purpose, but he also made me fast. When I run, I feel his pleasure.”

The movie Chariots of Fire had the Scottish Olympian athlete and rugby international Eric Liddell say these words. Whether he did or not – and an evening using Google has been unable to clarify this for me – these words are so powerful that they have stuck with Liddell’s name ever since.

They are not flippant or self-justifying words – not at all. Neither were they just the result of his endorphins kicking in.

Liddell was the man who refused to run on a Sunday at the Olympics in the 100 metres, an event he stood an even chance of winning; and was to give himself for missionary service in China where he would die in a labour camp. When he said “I feel his pleasure” – if indeed these were his words! – he was expressing what we would all like to believe is true: the Creator is deeply delighted when his creatures do what they are made to do, and do so in honour of him.

But does the running of the runner please God, really? Does the playing of the saxophone please God, or is it just blowing his own trumpet? Does the art of the artist, or the work of the worker please him? Does what you do bring pleasure to God – do you know his delight? What can we offer to God that will please him, after all? Some people are very hard to please, and God appears very much to be one of those. It isn’t like he hasn’t got everything already. What does he lack that I could presume to give him?

It’s an ancient problem; and it’s why human beings have always offered sacrifices in the hope that God would be pleased – that he would look favourably on the offerer of the gift. The sacrifice is proof of the offerer’s devotion – and pretty much all cultures have had them. To offer sacrifices is an almost instinctual human action.

Israel would be given a whole elaborate system of sacrifices by God himself, which was to govern their whole lives. But these sacrifices were reminders that the human problem was not only a matter of not knowing how to please God – it was knowing how to placate him. Human sinfulness meant that atonement needed to be made, not to please God but to appease him. So far are human beings from delighting the Creator.

You can’t cheat a God who sees into the human heart – he is pretty much unimpressed by outward performances; in fact they are a matter of deep offence.

As if that wasn’t enough, the sacrifices themselves became a point of further complication for Israel. Merely performing acts of sacrifice as outward actions misunderstands who YHWH is. It treats him as a simpleton. Cheating on sacrifice by offering defective animals was not like you or I fudging our tax returns. You can’t cheat a God who sees into the human heart – he is pretty much unimpressed by outward performances; in fact they are a matter of deep offence. In the first place, it treats God as if he can be conned or manipulated, as if the right gift is an item in an exchange with God that he guarantees to honour, like some bank cheque.

What’s more: it acts as if God is not already the owner and giver of all things. If all things are God’s, the point of offering sacrifice to him is not to give him something he hasn’t already got, but to really please him by offering him the praise that is his due. It isn’t the aroma of burning meat that he enjoys; it is the sweet scent of the worship and obedience of his people. That’s what Cain did not grasp; nor many in Israel. Samuel says to Saul: Has the LORD as great delight in burnt offerings and sacrifices, as in obeying the voice of the LORD? Behold, to obey is better than sacrifice, and to listen than the fat of rams. (1 Sam 15:22)

It’s that sin problem again: the sacrifice is only pleasing to God if it is a true reflection of the heart. And yet the human heart is so wayward and devious – who could ever hope to please God? Not because God is too hard to please, but because we are incapable of turning our hearts to the business of worshipping him as he deserves.

Our problem is still there: how can we please God? We know the answer to the question. What he wants from his creatures is their true worship – their heartfelt praise and their obedience to him. But we are unsure if anyone is clean-hearted enough to be placed to offer him this praise.

As Israel found, you couldn’t stroke him under the chin to get him purring. He sees past all that, straight into the heart. And the human heart is where it all gets complicated. The naive dream that we humans have of feeling God’s pleasure as we do what we are created to do seems very distant.

But there is one with whom he is well pleased indeed. That was what was declared from heaven when Jesus was baptised, and the Spirit of God descended on him like a dove. The Father is well pleased with the Son – he is pure in heart and obedient, submitting his will always to the Father’s will. Finally, we see a human being turned and tuned to its true purpose.

Can we, then, please God?

Can we, then, please God? Is it now possible, if we are united to Christ by the Holy Spirit, if we are justified and adopted into the family of God – to delight the Father, as the Son delights him? There is a sense in which we have been so careful to assert you can’t earn your salvation through meriting it, we have forgotten how the New Testament writers talk about the Christian life: not as a moral duty, but as a way of seeking to please God. The good works of the New Testament are not good in and of themselves but because of who they please and praise.

We know, as Paul puts it in Romans 8:8, that those controlled by the flesh cannot please God. But that is not what we are, if the Spirit lives in us. And so Christians ought to make their goal to please God, just like Paul did (2 Cor 5:9) – not because they win their salvation this way, but because it is what they were saved to do. It is then, not only possible, but imperative that we live to please God!

We please God in two ways: by exalting his name in praise, and by sacrificing ourselves for the good of others. Have a look at Hebrews 13:15-16:

Through Jesus, therefore, let us continually offer to God a sacrifice of praise – the fruit of lips that confess his name. And do not forget to do good and to share with others, for with such sacrifices God is pleased.

Firstly, God delights in the praises of his people. It is a sacrifice we are now, in Jesus, free to give him – “through Jesus.” This praise is a verbal activity, emanating from the mouth, and involving confession of his name. Making great the name of Jesus makes great the name of God. Exalt Jesus, and God is pleased.

Praise is not just evangelism, though it surely includes the proclamation of the good news in the world. I think God is genuinely delighted by the words and songs and prayers we address to him – not just because others are overhearing them but because they are directed to him. He is not needy for it, but he revels in it.

Secondly, in Jesus we are finally free to do what we are made to do as creatures: to please God in our acts of self-sacrifice for the good of others. We offer our bodies as living sacrifices, holy and pleasing to God – and it is hard not to think that Paul has in mind here the possibility of our suffering on behalf of others in an echo of Jesus’ death. Not that our self-sacrifice atones for sin, but it does serve others and please God. We bear with one another, carrying each other’s burdens, as he did. Through Christ, our self-sacrifices make a sweet smell in God’s nose. So: make an offering of your whole self to God, because it pleases God.

Our fellow creatures did not come by chance

#MeToo: Christian women share stories of assault at the hands of Christian men

#MeToo: Christian women share stories of assault at the hands of Christian men

In the wake of Hollywood scandal, ordinary women reveal sexual harassment by Christians