In the summer of 1834, Thomas Buxton called upon God to “be thou my guide and guardian in this effort.”

The “effort” that this parliamentarian and social reformer prayed for was his campaign to seek redress for the Aboriginal people of Britain’s settler colonies, such as Australia.

“… Appropriate compensation be given to [Indigenous people] in return for the evils inflicted with acquiring their land.” – Thomas Buxton

In light of National Reconciliation Week 2020, it is timely to appreciate the long tradition of evangelical advocacy for Indigenous people.

A protégé of the great evangelical abolitionist MP, William Wilberforce, Thomas Fowell Buxton (1786-1745), was one of the morning stars of the evangelical mission to improve the wellbeing of Indigenous inhabitants. Leading the anti-slavery movement in the House of Commons since the retirement of Wilberforce in 1825, Buxton soon devoted his attention to the mistreatment of the Indigenous peoples in the colonies.

In a letter to a Cape Town clergyman in 1834, Buxton wrote that “we ought to fix and enforce certain regulations and laws with regard to the natives of all countries where we make settlements.” Holding that such laws needed to “be based on the principles of Justice”, Buxton proposed that “natives have a right to own their own land” and that “appropriate compensation be given to them in return for the evils inflicted with acquiring their land.”

With the help of Quakers, Buxton founded the Aborigines’ Protection Society in 1837, the first Indigenous welfare body of its kind.

Buxton, however, was not alone. The great social reformer, Lord Shaftesbury (1801-1885) assumed the parliamentary mantle of Buxton in his concern for Indigenous people, just as Buxton himself had done earlier with Wilberforce’s abolitionist cause. Whilst Shaftesbury supported Britain’s empire, he denounced its abuses against the native inhabitants of India and pledged to do “everything we can to advance their temporal and eternal interest.”

When factory reform surfaced in India, Shaftesbury demanded that the same rights and protections afforded to white workers be extended to Indian people.

Buxton and Shaftesbury’s commitment to Indigenous welfare was essentially borne of their belief in the primacy of human dignity, an outlook indebted to both the liberal Enlightenment and the Evangelical Revival. Exemplified by the likes of John Wesley and Wilberforce, the evangelicals affirmed the biblical principles of the imago Dei (“image of God”) and the equality of all races descended from “one blood.”

For these evangelical Christian leaders, all human beings were not only created in God’s image but redeemable through Christ. As such, the human dignity of all – not least that of the much-mistreated Indigenous peoples – was a cause worth fighting for.

To be sure, differences in opinion will exist today among evangelical Christians – and Australians at large – about the causes of Indigenous disadvantage and the approach forward. Whatever our political and policy disagreements may be, the unifying, driving force must be the conviction that our First Peoples bear God’s image and that for all the historical hardships endured, their contribution to Australia has been and will continue to be remarkable.

But how is this history about Buxton and Shaftesbury relevant to Australia today and the ongoing quest to improve the lives of Indigenous Australians?

Like the evangelicals of nineteenth-century Britain, have Australian evangelicals produced any champions for Aboriginal land rights and wellbeing at the parliamentary level in recent, living memory?

“They should have an honoured place, the first place in our nation …” – Rev Fred Nile

In fact, one such MP has been Rev Fred Nile, a seemingly permanent fixture on the red leather of the NSW Upper House. Perhaps best known for his staunch defence of traditional Christian sexual ethics, the Congregational minister-turned politician emerged also as an early contributor to legislating Aboriginal land rights in Australia.

When NSW introduced its original Aboriginal Land Rights Act in 1983, Nile rose to support it, telling parliament that:

“The bill is a source of hope for a significant number of Aboriginal people who should not be second-class citizens. They should have an honoured place, the first place in our nation, as the original inhabitants of the land now known as Australia. The loss of our Aboriginal community would have been a loss without compare … This is symbolic legislation. It may not be perfect, but it demonstrates to the Aboriginal people that the powerful white establishment cares about them and has put its money where its mouth is, combining deeds with words.”

As well as being symbolic, the evangelical MP saw the legislation as a practical instrument to remedy past wrongs and provide a way forward:

“It must be admitted that some of the well-meaning efforts of groups that worked with the Aboriginal people originally did break up the traditional tribal and family structure of Aboriginal communities … This proposed land rights legislation seeks to reverse that trend. The loss of traditional land by the Aboriginal people has resulted in a serious loss of purpose and sense of belonging for those people. By this measure the Government is seeking to restore that sense of direction.”

Supporting later amendments to the original 1983 Act, Nile told parliament in 2014 that “we should do all we can to assist Aboriginal people, without an attitude of paternalism, and encourage them to have self-determination and self-management and to become self-supporting.”

From Buxton to Nile, evangelicals in Australia can take pride in the enlightened humanitarianism of their forebears on Indigenous rights. At the same time, they should recognise that the work of helping our First Peoples is far from complete. Despite the greater protection of land rights and the welcome 2008 apology, there is so much more to be done in “closing the gap” on living standards and life expectancy. Perhaps the most sobering statistic is that one in 50 Indigenous people is in prison, compared with about one in 600 for the general population. 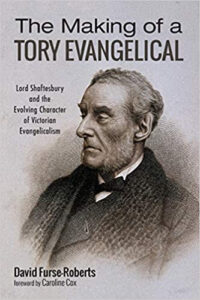 David Furse-Roberts is an Adjunct Research Fellow at the Australian Centre of Christianity and Culture at Charles Sturt University Canberra and the author of The Making of an Evangelical Tory: Lord Shaftesbury and the Evolving Character of Victorian Evangelicalism.

Australian Centre for Christianity and Culture