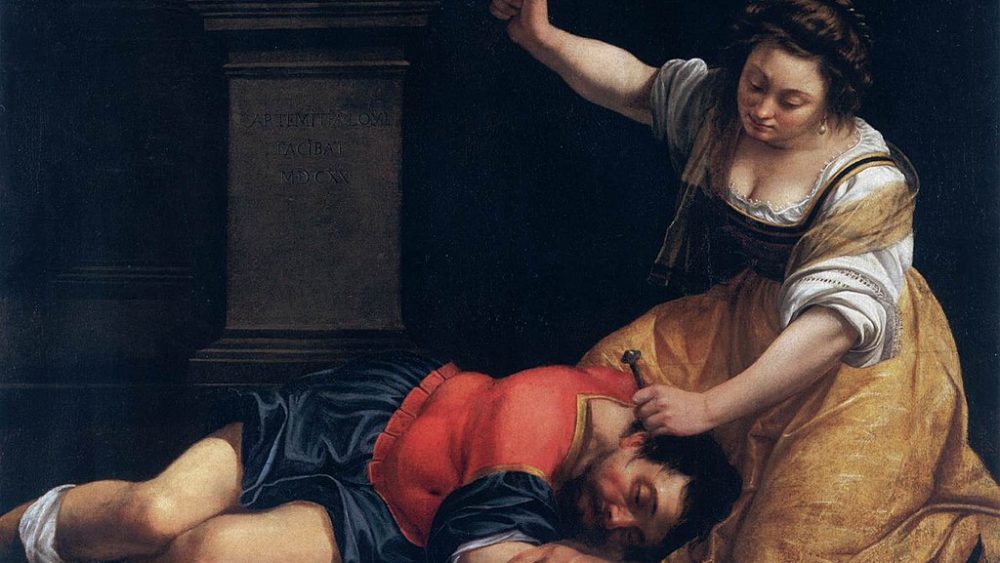 The stirring story of Jael and Sisera as depicted by Artemisia Gentileschi.
Wikimedia
Opinion music

Reframe the leading lady as a wily fighter, rather than a victim

You know what happens at the end of operas, don’t you? Spoiler alert: The heroine will probably die a gruesome death either by her own hand or that of her jealous lover.

Violent demise of the heroine has been a stock-in-trade for opera for centuries.

Think of audience favourites such as Carmen, Tosca and Madame Butterfly – all of whose leading ladies fall victim to the dramatic operatic trope of “love, passion and desire”.

Opera seasons continue to be dominated by these 19th-century mainstays, which prop up opera companies at a time when the art form struggles to find relevance in the modern world.

But Australia’s leading composers, directors, musicians and singers are demanding a revolution. More than 190 signatories have called for a national commitment to opera work that reframes women’s voices and stories away from victimhood, saying stories in which women meet grisly ends have no place in the contemporary world.

“The stories we choose to tell, who is telling them, and how we choose to tell them is of fundamental importance,” the call to action reads. “The perception of women in opera as subservient victims remains at odds with the contemporary conversation.”

Co-author Sally Blackwood, an artistic director in theatre, opera, circus, and dance, says it’s not just about opera being outdated.

“It’s about the stories we are telling and the way in which women are portrayed, questioning who is telling these stories and how this work is being made,” she says.

“There is incredible new work being made outside the mainstream, and some being commissioned by festivals, but unless there’s a major shift in mainstream opera leadership it’s going to stay as a patriarchal museum art form.”

Here’s a thought: why don’t opera companies commission composers to search the Bible for tales that glorify women’s faithful ambition and agency?

It’s often thought that the Bible is the first bastion of patriarchy and female subservience – yet the truth is, there are many examples of faithful yet wily women in the Bible. Perhaps some of these women’s stories could be turned into inspiring operas that uplift rather than victimise women?

Perhaps the Bible’s prime example of upturned patriarchy is Jael

The wonderful stories of Ruth and Esther have already been claimed as the subject of operas. But surely, there is room for many more!

Perhaps the prime example of upturned patriarchy is Jael in the Book of Judges. She was the courageous woman who, prompted by the Holy Spirit, killed the leader of a foreign army by hammering a tent peg into his temple while he was sleeping in her tent. Yes, a tent peg. Into his temple. Look it up.

Sisera was the powerful and cruel commander of the Canaanite army who had oppressed the Israelites for 20 years.

By killing Sisera, Jael denied the glory of his death being afforded to Israelite military leader Barak – who had only gone into battle on the condition that Deborah went with him.

Deborah, of course, was one of the most formidable heroines of the Old Testament who inspired the Israelites to victory over the Canaanites.

The heroic story of Deborah is tailor-made for opera! One day she received directions from God to send for a man named Barak. She was to tell him God commanded him to take 10,000 men and go up to Mount Tabor, where God would help the Israelites defeat Sisera.

But faced with Sisera’s armies of 900 chariots, Barak was less than keen to lead the army of Israel on his own. He told Deborah, “If you go with me, I will go; but if you don’t go with me, I won’t go.”

Deborah didn’t hesitate. She was confident that such opposition meant nothing to God and was zealous to do as he commanded. She said, “This is the day the Lord has given Sisera into your hands. Has not the Lord gone ahead of you?”

What a turn-about! Whereas Barak was too afraid to go to battle without her, Deborah was full of faith that God would give Israel the victory. She believed God’s word and acted according to what he had spoken.

The Bible is not afraid of upending conventional morality either.

The story of Deborah and Jael has already been adapted to opera, in Dèbora e Jaéle, by Ildebrando Pizzetti, who wrote both the music and the libretto (words). However, the narrative diverges from the biblical account in that Jael falls in love with Sisera and she kills him in his sleep to save him from a worse death!

The true story is much more daring and heroic.

The Bible is not afraid of upending conventional morality either. Think of the resourceful prostitute Rahab, in the Book of Joshua, who courageously assisted the Israelites with capturing Jericho – by betraying her people.

In the New Testament, Rahab is lauded as an example of a saint who lived by faith, and as someone “considered righteous” for her works.

Then there is Abigail in 1 Samuel 25 – a woman of both beauty and brains, as well as unwavering faith. What an opera this story would make! When Abigail’s cruel and insolent husband Nabal insults David, while he is trying to feed his men in the wilderness, the future king leads 400 of his men to attack, vowing to wipe out every male in Nabal’s household.

Warned by a young servant, Abigail quickly prepares a generous gift for David and his men – bread, wine, sheep, roasted grain, cakes of raisins and cakes of fig.

After presenting the choice food, Abigail urges David not to “have on his conscience the staggering burden of needless bloodshed” and reminds him that God will make him a lasting dynasty.

After Abigail reveals to Nabal what she has done, “God struck Nabal and he died” … after which David marries her. A wedding – what could be a happier ending?

Opera and the doing of women

On the 80th anniversary of Kristallnacht and the protest by Aboriginal leader William Cooper, a multi-media, musical commemoration is being staged

The GFC and natural disasters could not kill an ambitious musical, 20 years in the making