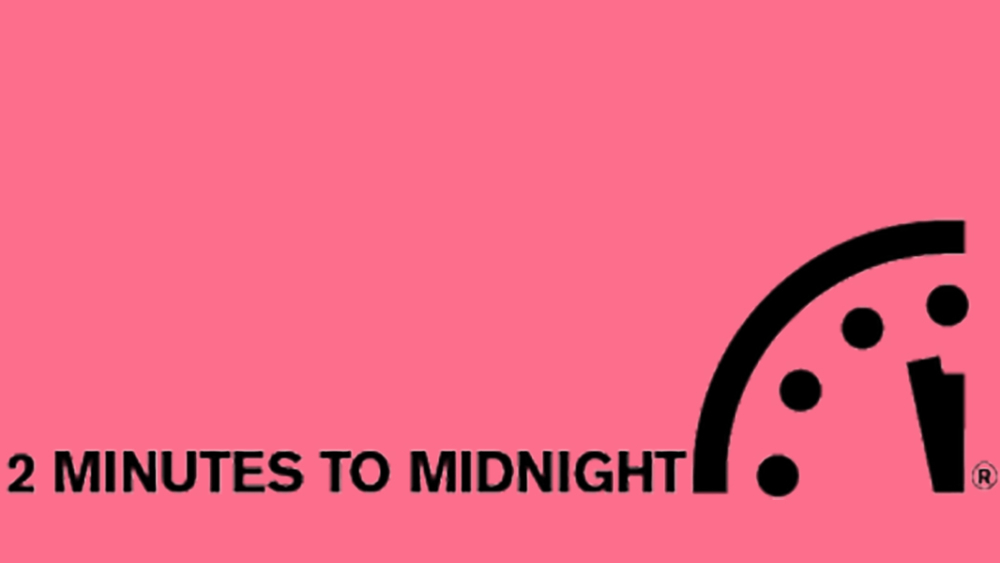 Scientists predict extinction is nearer than ever before

Since 1947, the “Doomsday Clock” has warned the world of a possible apocalypse. At 2am EST, the Clock advanced to just two minutes to midnight.

The Doomsday Clock figuratively measures how close we are to a predicted moment when humans will collectively cease to exist.

Two minutes to midnight is the closest the Clock has ever been to the “Cinderella hour” when the world as we know it will pass away – or so those behind the Clock suggest.

The Clock is “reset” periodically by the Bulletin of Atomic Scientists, as the threat of global catastrophe rises and falls. Since 2007, the Clock has included not only the threat of nuclear weapons but also the possibility of a global climate catastrophe.

The keepers of the Clock cited an “obvious and imminent” danger

One year ago, the Clock moved from three to two-and-a-half minutes to midnight, largely due to worsening diplomatic relations and the increase in fake news. The scientists said that “new global realities emerged, as trusted sources of information came under attack, fake news was on the rise, and words were used in cavalier and often reckless ways.”

Today we moved another thirty seconds toward disaster as the keepers of the Clock cited an “obvious and imminent” danger, explaining that “major nuclear actors are on the cusp of a new arms race.”

They also specifically named “the abuse of social media” as a cause for alarm. The scientists called on citizens to “insist on facts and discount nonsense.” People should use social media for good, they said, to “demand action to reduce the existential threat of nuclear war and unchecked climate change.”

The end of history, or at least post-apocalyptic visions of the future, make for great news and popular movies. Wikipedia lists almost 300 feature-length apocalyptic movies. Whether it is On the Beach or The Road or Hunger Games – or the Bible’s finale, the Book of Revelation – we are fascinated by big picture visions of a catastrophic future.

Perhaps that’s why the Doomsday Clock captures our attention.

But of course Christians have another view of doomsday. It’s a bigger picture…

On holiday in December, I re-read On the Beach by Australian author Neville Shute. It’s a 1957 novel about nuclear annihilation [sorry: more spoilers to come], which was turned into an acclaimed movie featuring Gregory Peck, Ava Gardner and Fred Astaire. The book finishes – actually, the human race finishes – on the beach in Barwon Heads on the surf coast south of Melbourne.

I confess I shed a quiet tear for the fragility of human existence as the characters tried to live normal lives (scrounging milk for the baby, or the scarce petrol for “the Australian Grand Prix” at Philip Island), while sadly resigning themselves to awaiting the deadly radioactive air from the north. My emotions were probably heightened by the fact that I was holidaying just 10km up the road from Barwon Heads.

But of course Christians have another view of doomsday. It’s a bigger picture than that of Neville Shute or the Bulletin of Atomic Scientists; it’s a picture that goes beyond even the horror of a global apocalypse.

In the first place, Christians believe that history’s times are ultimately in God’s hands. No one – neither scientists nor even the earthly Jesus himself – can name the day or the hour when God will bring the long period of fallen human history to an end.

Christians ought to be leading the charge when it comes to caring for God’s world.

Jesus says, in the “little apocalypse” from Mark’s gospel, “about that day or hour no one knows, neither the angels in heaven, nor the Son, but only the Father” (Mark 13:32).

However, trusting in God’s sovereignty over history is no excuse for inaction. Christians also believe that we are called to exercise “responsible dominion” of the planet.

The creation matters – so much so that one day God will renew it – and Christians ought to be leading the charge when it comes to caring for God’s world.

So, with the scientists who warn of Doomsday, we too share an urgency about planet care.

But, whatever the time before midnight, we do not lose hope; we will not fear what can kill our bodies (Matthew 10:28), as we trust in the one who promises a post-apocalyptic and eternal relationship with the Creator.

Chris Mulherin is Executive Director of ISCAST – Christians in Science.

“I could never read this story with my people,” said James, one of the few…

Worship! With all the senses!

Worship! With all the senses!

The Christian who led the IPCC

But truth can be heard in ugly places too