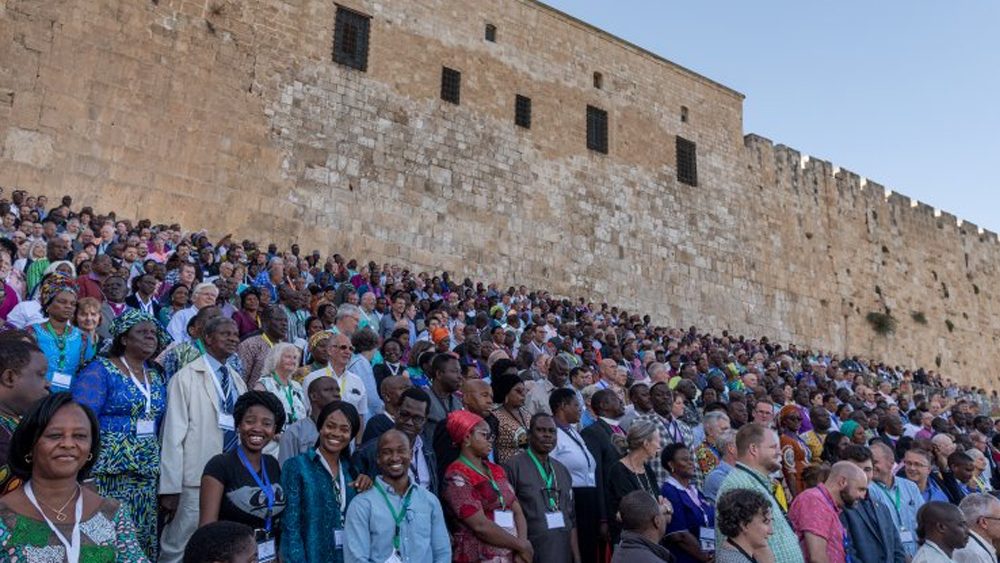 We speak to Peter Jensen, the Aussie man at the centre of a ‘seismic shift’ in Anglican history

In the aftermath of last year’s postal survey, debate about same-sex marriage is now firmly focused in the church. This week the Uniting Church in Australia comes to its decision point, and the United Methodists, its cousin in the US, Europe and Africa, will decide in early 2019 (at present it takes a conservative view).

Around the world, Anglican churches too are taking opposing stances. Many readers of Eternity with an Anglican bent may have noticed that their ministers disappeared in June.

Several hundred Aussie leaders turned up in Jerusalem for an event hashtagged #GAFCON2018, which local commentators described as “a turning point in the history of Anglicanism” and  “effectively an alternate Communion structure.”

GAFCON unscrambled means “Global Anglican Future Conference.” It pulls together leaders representing the majority of the world’s Anglicans even while some Western (mostly) white branches of the Communion churches are accepting same-sex marriages or blessings. Could it be that there’s a big change coming to the Anglican Communion, the network of churches planted by the British empire?

Peter Jensen, former archbishop of Sydney and a strong advocate for traditional man-woman marriage, has been at the centre of worldwide debate as the general secretary of GAFCON. But he is careful to avoid triumphalism.

“One of my problems is that you can always think that the thing you are involved in is the most important thing that has ever happened. You can deceive yourself and others by overstating things. That is a problem that we all have,” he says.

“However, as far as I can see, the issues that have given birth to GAFCON (I don’t say GAFCON per se), it seems to me, are vital for the survival of Christianity in the West.”

The Anglican family (of GAFCON) began in 2003 with the election of Gene Robinson, a partnered gay man, as Bishop of New Hampshire in the United States, and the official adoption of same-sex blessings by the Vancouver-based New Westminster Diocese (region).

“People say ‘it’s all about sex’ to which I say ‘No, it’s all about the Bible’. But on the other hand, our sexuality is hugely important, and God makes that clear in his word. So we don’t want to denigrate that either and say ‘No, it is not about sex.'”

“What the liberal Americans did was to so breach the tradition – at a pretty vital point – that it has begun to create a new religion.”

The GAFCON strategy surprises many of its liberal critics. In Jerusalem, the GAFCON group made it clear they do not plan to leave the Anglican Communion. They want to stay, and renew it from within.

Peter Jensen also wants to make it clear that not everyone in it is like him.

“Interestingly, GAFCON is not an evangelical group. It is the Anglican Communion as it was before 2003. It contains charismatics, it contains Anglo-Catholics, it contains evangelicals. The thing that drew them together – and you may find it strange that I am saying this – is a commitment to tradition.

“That is, tradition properly understood – the theological tradition that comes from the Bible and which has helped shape the Christian churches.

“What the liberal Americans did was to so breach the tradition – at a pretty vital point – that it has begun to create a new religion.

“It is an observation that John Gresham Machen made a hundred years ago in his book, Christianity and Liberalism, where he really regarded liberalism as a new religion.”

Machen led a conservative revolt in the US against “modernism”, which downplayed the authority of the Bible. He is a key figure in forming the conservative Bible scholarship that underpins today’s evangelicals.

“Even Machen, who was a very committed Presbyterian, even he said in his book that an alliance with Roman Catholics, for example, is going to be necessary (and I am not quoting him now) to sustain the theological tradition based on scripture which has shaped Christianity.”

Somewhat like Chinese premier Zhou Enlai, supposedly asked by Gough Whitlam about the significance of the French Revolution (“It’s too early to tell”), Jensen finds it hard to weigh up his ten years in GAFCON against his other concerns. “It is hard to answer that question. It has certainly been very significant. It has certainly been very draining. It could be even more significant; it may be – although one does not want to prejudge this – a seismic shift in the Anglican Communion. I myself am more deeply interested in the evangelisation of Sydney.”

In a few months Jensen will leave his position as general secretary – essentially the chief organiser – of GAFCON. His successor will be Benjamin Kwashi, Archbishop of Jos in Nigeria, who no sooner had returned home than had his home raided, his security guard shot dead and his cattle stolen. Nigerian Christians are on the front line of a battle with Islamic forces who want to push them out of the northern part of the country.

Asked by Eternity “is there something else you want to add?” Jensen responds “The Sydney Morning Herald once asked me that and I responded ‘What your readers need to know is that Jesus loves you and he died to save the world.’ And The Sydney Morning Herald lady laughed and said ‘they would not print that.'” Eternity responded as you might expect: “Well, I am going to print that.”

Jensen says that as in Philippians 1, which calls on Christians to “defend and proclaim the gospel”, GAFCON combines both a desire to correct what it sees as false teaching with a desire to win more people to Christ.

A “letter to the churches” from GAFCON in Jerusalem finishes with a call upon God, “that the Anglican Communion may become a mighty instrument in the hand of God for the salvation of the world. We invite all faithful Anglicans to join us in this great enterprise of proclaiming Christ faithfully to the nations.”

A church meeting causes a shockwave

A church meeting causes a shockwave

A close relative of Australia’s Uniting Church, the United Methodist Church (UMC) has delivered a…

But aren’t we all weird?