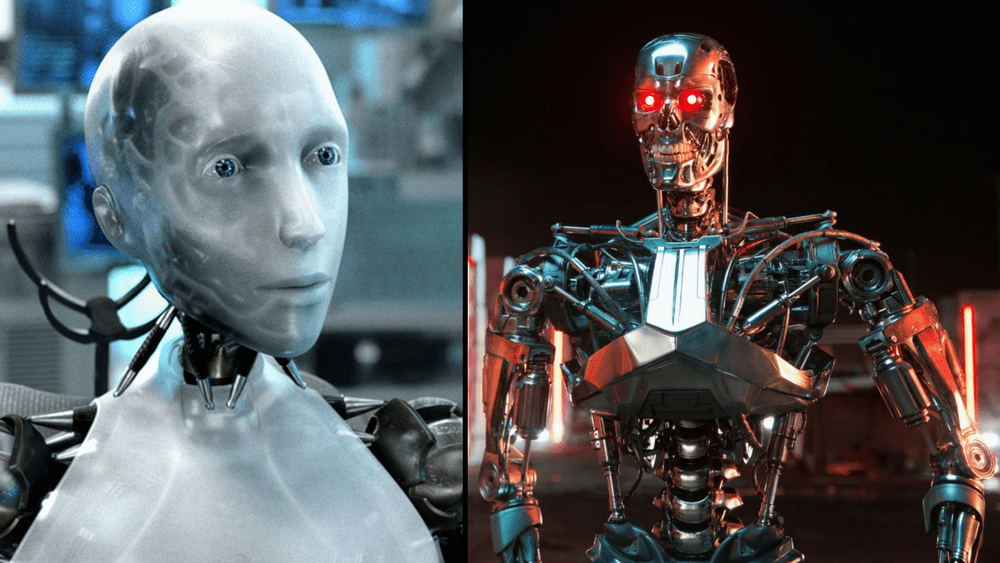 Is artificial intelligence a threat to Christianity?
IMDb
In Depth technology

Hey Siri, did Jesus come to save the robots too?

A future where autonomous robots pastor churches, fight wars and drive cars is no longer confined to the realm of science fiction. In the last year, prototype robot priests were introduced in Germany and Japan to bless people and read prayers at funeral services. Lethal autonomous weapons are in development across the world (although few, if any, look anything like Terminator or the robots in I, Robot). And companies including Google and others have been working on self-driving cars for years, with trials underway in some cities.

Artificial intelligence is a slippery concept, with definitions constantly evolving as technological breakthroughs bring complex robotic processes into our everyday lives. But essentially, the world of artificial intelligence is trying to create technologies that reason, manipulate and figure out how to optimise the situation in front of them, even if they have never encountered it before. The most obvious examples of this are Siri and Google Now, digital personal assistants that collect information from your requests and use that information to serve you results that are tailored to your preferences.

Let’s just admit it straight up: this is no easy task.

It’s the stuff of movies, but soon we all may be facing ethical questions about how we treat these thinking, feeling, self-aware creations. And for the religious among us, the existence of intelligent robots raises bizarre yet important questions about whether a robot needs to be, and can be, saved. You know, saved.

Let’s just admit it straight up: this is no easy task. The scientific community is divided on whether we can actually make a thinking, feeling, self-aware robot, even as research steams ahead at a rate of knots. And Christian religious communities are not exactly united on the question of what it means to be human, let alone what the potential development of intelligent robots will mean for Christian faith.

On the development of intelligent machines, Toby Walsh, a professor of artificial intelligence at the University of New South Wales, told Eternity that autonomous robots are still a long way in the future.

Walsh isn’t alone in saying this, but research has advanced enough to make some people worry. Two years ago, thousands of AI researchers across the world expressed concern to the United Nations about a military artificial intelligence arms race, suggesting that autonomous weapons could usher in a type of warfare that results in significantly more human casualties. And this year, a group of the world’s leading AI pioneers called on the United Nations to ban the development and use of killer robots.

If a robot had a soul, does that mean they would need to be saved?

But for Christians, whether or not we can create intelligent robots is just the tip of the iceberg. Just say that scientists manage to create thinking, feeling and self-aware robots – well, what then?

Addressing the topic of ‘Can Technology Influence a Better Way of Life?’ at a Q Commons event in 2016, Kevin Kelly of WIRED Magazine, said, “I can imagine a time when robots say, ‘I have a soul, I am conscious.’ What do we say to them?”

It is by no means certain that we will ever get to this point, but Kelly’s point is that we should be ready for it, if it happens. Kelly suggests that the “theological disruption” that would occur with the rise of intelligent robots would be on par with the effects of Copernicus’ theory that the Earth revolved around the sun (and not the other way around) and Charles Darwin’s theory of natural selection. Both scientific discoveries challenged long-held Christian beliefs about the origin of the Earth and how human life came into being.

The invention of a conscious and thinking robot would raise questions about what it really means to be a human and, for Christians, what are the preconditions for salvation. It’s worth noting that both these things are hotly contested in broader Christian thought.

Historically, Christians have generally held the soul to be something like “the breath of life” from Genesis 2, that is unique to humans and somehow guides a human throughout their life. It continues into the new creation.

If humans manage to create thinking, feeling robots, would they have a soul? And if a robot had a soul, does that mean they would need to be saved?

Basically, Alan Turing was making the point that God could confer a soul on a machine if he so wished

Well, not surprisingly, some say yes and some say no. On one end of the spectrum, UNSW’s Toby Walsh told Eternity that it’s likely machines will be much smarter than humans, but that “they will have no desires of their own. They will do just what we ask them to do.”

On the flip side, notable computer scientist and atheist Alan Turing wrote, in 1950, that to say robots could not think (because thinking may be considered a function of the soul) “implies a serious restriction of the omnipotence of the Almighty.” Basically, Turing was making the point that God could confer a soul on a machine if he so wished, even though he didn’t personally find that argument convincing.

WIRED Magazine’s Kevin Kelly makes a different kind of ‘yes’ argument, saying that in the same way God created us, we can create other beings. “The creator made us as beings with free will and consciousness – we are going to do the same thing. We are going to make beings with free will and consciousness, because we are in the image of the creator.”

If a machine has a soul, then is it able to have a relationship with God? Did Jesus die for the robots too?

“If AI is autonomous, we should encourage it to participate in Christ’s redemptive purposes.” – Christopher Benek

Christopher Benek, a church pastor in Florida and commentator on theology and technology, told Eternity, “My theological understanding is that all of creation will be redeemed and renewed … It would make sense then, that if humanity can co-create strong AI, indistinguishable from current or future forms of humanity, then that saving grace would be extended to them/us as well.”

It’s not a stretch to say that intelligent robots would be redeemed, because every created thing is slated for redemption at the return of Jesus Christ.

“If AI is autonomous, then we should encourage it to participate in Christ’s redemptive purposes in the world,” Benek said. “They can/could do so by loving God, loving people, or by living out Christ’s great commission in their context.”

In the meantime, while we wait for the development of truly intelligent AI, researchers say that any intelligent robot must be programmed to behave ethically. Once again though, opinion is divided on how to do this, and questions prevail about whose morals the robots will be instructed to follow.

“It will take every possible type of invented mind to even begin to appreciate the greatness and mystery of God.” – Kevin Kelly

UNSW’s Toby Walsh suggests that philosophy will become very useful: “We will need to make explicit the precise morals that we want such machines to follow. There are many interesting and challenging questions we need to answer like whose morals will these be,” says Walsh.

Sounding a different note, WIRED’s Kevin Kelly says we should make a catechism for robots, to teach them who made them and what happens at the end. He suggests we make a catechism for robots, “educat[ing] them about the difference between good and evil, about who made them (and who made us), what to do when they do something wrong. It will be a great opportunity to help us form their morality.

“It will take every possible type of invented mind to even begin to appreciate the greatness and mystery of God. Our human minds alone are so limited. We need others who ‘think different’,” says Kelly.

Robot priest unveiled in Germany to mark 500 years since Reformation

Can Technology Influence A Better Way Of Life?