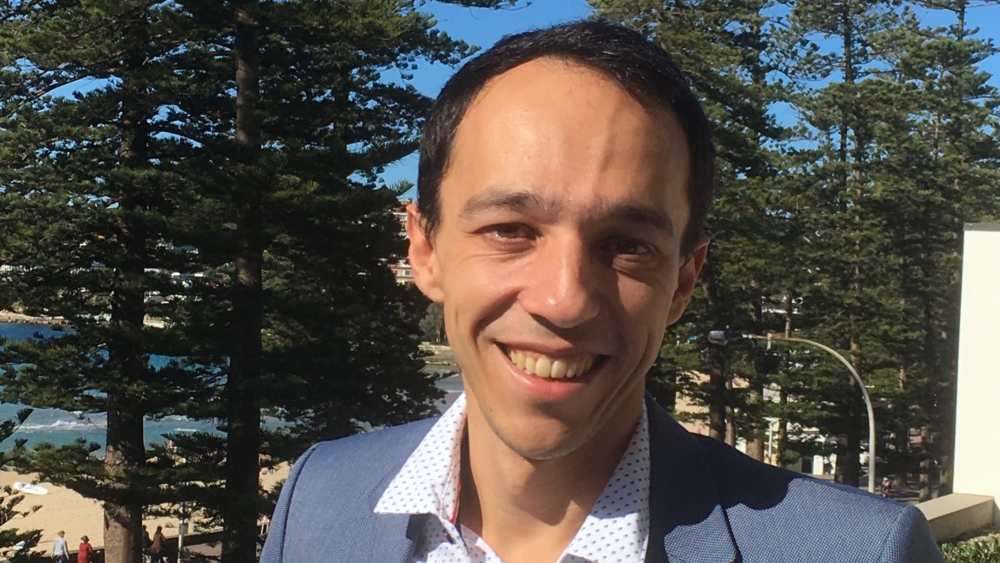 The dynamic, visionary head of the French Bible Society, Jonathan Boulet, believes God has called him to create a new, fashionable image for God’s word among the French people.

At the moment, he says, the Bible is so daggy that the only place where you would see anyone reading a Bible in France is in one of the evangelical churches. A recent survey showed that only 0.1 per cent of France’s youth reads the Bible regularly.

“One of my aims is to make the Bible trendy,” says Boulet, 38, a former financial analyst who sold his publishing company and moved cities to answer the call from God.

“This is my part I have to do and I’m sure through God this is where I will touch people.”

Boulet spoke to Eternity during a break in the United Bible Societies’ Roundtable Exchange in Sydney, attended by about 230 international delegates from the world’s Bible Societies.

“We host migrants every Friday night, and we give them food, legal support and social support.” – Jonathan Boulet

In his first two years as Secretary-General of the Alliance Biblique Francaise, Boulet has moved the office from the suburbs into central Paris – a 15-minute walk from the Eiffel Tower – launched new websites, created new Bible reading videos and blogs and made a clean sweep of the staff.

“Sixteen people have left,” he says, adding that these staff were not Christian. “We are a team of six now.

“We created an office which is extremely modern and we encourage people to come to the office. We host migrants every Friday night, and we give them food, legal support and social support.”

For a youth audience, the Society has created a Scripture programme with daily visuals and two-weekly videos. This Zebible blog is also released on social media.

In the eight months since launching a new Bible reading website, which he describes as four websites in one, it has attracted 750,000 unique visitors, but Boulet is not yet happy.

“…what I’m looking for are testimonies of people being impacted.” – Jonathan Boulet

“One million is our target so we’re not there yet,” he says. “I’m never enthusiastic with those things. I’m waiting for the results and the impact. These figures are only data and what I’m looking for are testimonies of people being impacted.”

Boulet says the main area that produces testimonies is the youth programme – Zebible – but the website generates a lot of emails with questions about the Bible.

He is encouraged by the results of a survey that was undertaken in France about community attitudes to Bible reading.

“We had 2500 people answering the survey, which for France is huge. It’s interesting because we didn’t have any community and now we start to have community interaction, so it’s a long-term work.”

“I found music a great tool to share faith, but in the long run to go deeper you need written books.” – Jonathan Boulet

Three months ago Boulet hired the son of the Hillsong pastor in Lyon to create high-powered, dramatic videos for the youth audience, but because Boulet wants to serve the full body of Christ he also includes less “pushy”, family-friendly videos.

“So we are using the media, visuals, events.”

One planned event will take place in October in Strasbourg.

“There is the 500th anniversary of the Reformation so we will have a place where we will put everything in black and we will have video on every wall where you will explain the Bible and afterwards there will be a place where there is no sound but only a prayer room with a candle and we pray that people will experience the Bible.”

Later in the year he plans to stage a Hack My Bible event, where geeks will be closeted in a room for 48 hours and challenged to create an app or website or other innovative way to promote the Bible.

“The best things win a prize. The media loves that so it’s giving great exposure to the Bible and bringing a lot of dynamic.”

“God will take care of all the details when he gives you a conviction.” – Jonathan Boulet

The young gun – who finds it “interesting” that he is leading a team of people up to 20 years older than himself – was hired on the strength of a Bible magazine he created while taking a break from his finance job.

“The vision of this Bible magazine was to bring the text with a version people can understand in a creative way and the Bible Society loved this project. That is my passion, I believe in it.”

“They need to experience the Bible because it is a book which is alive, which is full of hope and in which the main message is a message of love.” – Jonathan Boulet

He believes that people are still attracted to the Bible and the key is to get them to experience the text for themselves.

Having grown up in a Christian family, Boulet says he has always had a deep sense of the truth of the Bible. But growing up in a family of 30 pastors of different denominations, he was turned off by the many disputes among them and decided he would never work for the church.

“Now it’s a different story because people see that we’re loving the same God even if we express it differently, but 20 years ago I could see my family having long discussions and injuring each other. I could see that being Christian is a good thing but serving the church was for me unattractive.

“…stories and testimonies are amazing but the Bible is essential.” – Jonathan Boulet

“So I decided to work in finance because my grandfather was a wealthy man running a major business chain and all of his sons became pastors and they spent a lot of money and they all went bankrupt. With that I saw my grandmother ending her life extremely poor. She was unable to manage. She was giving everything away for her children. That’s why I worked in finance because I was thinking as a Christian I have a responsibility to be a good manager of the resources the Lord is giving us.”

Five years ago, when Bible Society contacted him for the first time he said no, because he had taken a year off to let his wife pursue her career, and he had created a publishing house and music company, supposedly just for fun.

“I produced 40 CDs in total. I was organising gigs to support artists and I found music a great tool to share faith but in the long run to go deeper you need written books, so that’s how I ended up publishing a Bible – because stories and testimonies are amazing but the Bible is essential … It always calls you and it changes you inside.”

After receiving a vision from God, Boulet warned his wife that a major change was coming in their lives in June 2014, without knowing what it was.

“And when Bible Society called me back in June 2014 asking me again … I really felt I could bring ideas, competencies, visions,” he says.

“This was really a call of God because I had a company to sell, an apartment to sell, my wife was pregnant and I was living in Lyon. My wife said ‘the only way for me to go back to Paris would be to live near a big park and … we found exactly the right apartment on the side of Le Jardin des Plantes. The local school was full … then the school called me back and said we just had two kids leaving who are exactly the right range of age, so that was again a sign of God. It shows that God will take care of all the details when he gives you a conviction. You have to say yes but when you say yes and take a big step of faith he will take care of all of these things.”

Before accepting the job offer, Boulet insisted on a change in office location.

“Before I said a final yes I said if I step into the position one of the first things which is not an option for me is that the Bible Society in a secular country has to be downtown, especially in France where everything is centralised in Paris.

“So I said if you hire me that means immediately we sell the office … and we will be in the city as a testimony to be more visible, to have more volunteers, to serve the community. We can do partnerships with many organisations because it is easy to visit us. And the employees were totally separate from the life of the Bible Society because they didn’t see anything except what the boss was telling them. Now they see and I’m trying to always involve them and now all employees have to attend a UBS event once a year and it helps you to be better in your work because it gives you a broader picture. An artist absolutely needs to share this vision.”

Your best Bible year ever

Your best Bible year ever

Four apps that will help you read the Bible (really!)

Planting a church where John Calvin did

Australian students are in the throes of study stress, with final high school exams underway…