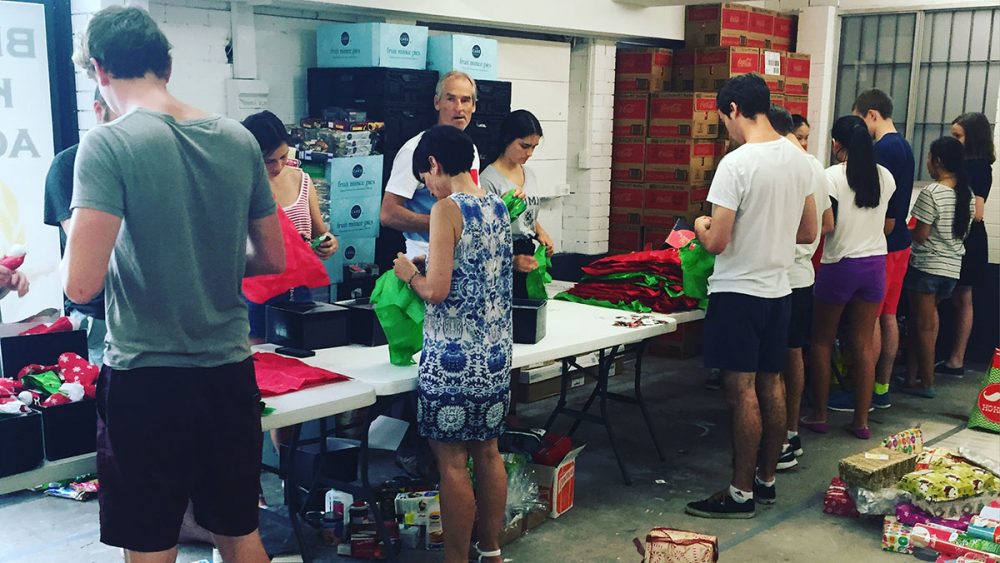 Why do we only volunteer at Christmas?

What stops us from giving up time and effort during the year?

The annual increase in Australians looking to volunteer at Christmas might be due to people not understanding the impact they can have, according to a volunteer co-ordinator in Queensland.

“Sometimes, that lack of numbers or lack of enthusiasm through the year might be because people don’t know if their volunteer work will have an impact, or if it will be a waste of time,” says Joel Archer, co-director of Hope Within Reach.

A charity based in Maroochydore, Queensland, Hope Within Reach focuses upon supporting homeless and low-income families. While its Christmas Care program remains its biggest volunteer program each year, Hope Within Reach runs regular dinners and winter campaigns which volunteers can be involved with during the year.

“They really feel like they are part of something.” – Joel Archer

Joel and his wife Brianna have been leading Hope Within Reach for about five years, and they report that those who volunteer with them throughout the year demonstrate a higher level of satisfaction and involvement than people who help out only at Christmas.

“If you create a lifestyle of community with them, I think that gives them a sense of purpose,” says Joel, who encourages people to view volunteer work as part of the fabric of their everyday life.

“It’s not just one-off helping; you want to do more with them throughout the rest of their lives, so they really feel like they are part of something. That’s how we get really great volunteers.”

Joel also points out that some of us can hold back from volunteering because we just can’t be bothered.

“This may sound blunt at first but I think it’s very true: the reality is that, naturally and commonly, we are all a little bit lazy. But if we see someone genuinely doing good in the community, it’s amazing how different the response is.”

The passion Joel has for serving homeless people was generated by first-hand experiences.

At 19, Joel was homeless. His parents sent him packing, but he says, “I deserved it; I was a pretty bad kid,” admits Joel. With no fixed address, job or income, Joel would steal to get by.

But his life was dramatically changed when he robbed the home of teenagers he had gone to school with. They called him up and Joel remembers thinking, “this was so shameful; not only do I rob but these people know who I am. They asked me to pay it back, and I didn’t even have the money that day to pay back what I had been caught stealing.

“I remember going home that night and praying to God: ‘What’s the point of my existence?’”

Joel soon got what he believes is an answer, as the blossoming Christian became involved with grassroots ways of helping out other homeless people, such as hosting BBQs. But it wasn’t until he came into contact with what has grown into Hope Within Reach that Joel found his calling for sharing God’s love with those on society’s fringe.

Growing over the past few years, Christmas Care involves about 120-130 volunteers on Christmas morning. Teams spread out and drop off presents and food to needy people between 6AM and 9AM.

“Christmas Care was shaped out of when a homeless guy took me to a family’s Christmas morning, who had very little. We gave them some stuff and it was just so raw. It was so upsetting but also empowering. We had one dude in tears – this big, tattooed dude – and I saw another side to Christmas.”

Inspiring other people to volunteer with them, throughout the year, is something Joel and Brianna haven’t tried to do through lobbying or hand-wringing.

“Instead of worrying too much about people volunteering, we just shared and communicated our hearts very truthfully. People really gravitate to what’s honest and truly impacting.”

Learn more about how to volunteer or support Hope Within Reach

This Mother’s Day, Mission Australia is encouraging families and mums to forget about putting on…

The Christmas street party that attracts politicians and the homeless

The Christmas street party that attracts politicians and the homeless