Catering with a conscience

A dinner service is changing the lives of vulnerable families

When Rachel Golding began cooking a few meals for busy friends, she had no inkling that these humble dinners would have such a far-reaching impact.

“Before I knew it, I was getting emails from people I didn’t know, asking if I could cook meals for them as well,” Golding explains to Eternity.

While she had always loved cooking, at the time Golding wasn’t working in a commercial kitchen. In fact, she was an academic at the University of Sydney, where she researched the experiences of families living with disability.

Yet it was this background that led Golding to question if a dinner delivery service could do more than just provide good food.

“One of the things that really interests me is what makes some families [living with disability] thrive, where others just struggle and things seem to go from bad to worse …”

“My question is, does dinner make a difference? I wonder whether or not having a really good dinner done for you will actually change daily lives and impact family wellbeing, and, ultimately, impact on the rates of crisis-driven breakdown we see in families living with disability.”

“If it did, this would be one of the most cost-effective interventions we could provide,” continues Golding, who now describes herself as a “recovering academic”.

More than 1315 meals have been gifted to vulnerable families.

Another key component in Golding’s vision was her Christian faith.“There’s a lot of food imagery in the Bible, certainly where it talks about banquets and feasting in Heaven. I do think that gathering people around good quality food imparts a great deal about how much you love somebody. One of the greatest ways you can show someone your love for them is to cook for them.”

When Golding began Dinner on the Table in 2014, it was set up primarily as a social enterprise. The profits from every dinner purchased are used to provide free meals for families living with disability. So far, more than 1315 meals have been gifted to vulnerable families, and around 5000 meals in total have been delivered to customers across greater Sydney, Wollongong, Newcastle, the NSW South Coast and Canberra. While remaining sincerely humble, the impact of Golding’s work was recognised at last year’s AusMumpreneur Awards, where she received the Women’s Business School Excellence Award.

Almost 36% of Australian households include a person with a disability.

Almost 36% of Australia’s 8.9 million households include a person with a disability. But while many services focus solely on the individual with a disability, Golding’s enterprise provides for the needs of the entire household.

“The long-term aim of Dinner on the Table is to change the way that we provide services to people living with a disability by recognising that we are not islands; we don’t live as individuals,” she asserts.

Golding is perched in a makeshift office in their new premises in Castle Hill, Sydney, where the company has been for only six weeks. A new café is opening next door, lending a jumble of chairs and tables to the new-move chaos. Yet the kitchen is a picture of calm, purposeful activity, as the Dinner on the Table team prepares its trademark hearty, from-scratch meals.

The team now consists of four cooks (including Golding), a “chief washer-upper” and a business strategist. Alongside their dinners, the company is now venturing into corporate catering. Golding is quick to clarify that this does not mean “individually-plated meals”, but rather communal, serve-yourself, family-style food. “We’re not Masterchef. We’re home cooking,” she quips.

Their new location will allow them to cook for larger numbers and, somewhat ironically, to offer a more personal service. As Golding chats to Eternity, a car pulls up alongside the front door. Golding grabs a large paper bag laden with food and dashes out. She passes the bag through the passenger-side window to the lady in the driver seat and stops to have a chat. On her return inside, Golding explains that this mum has a new-born baby asleep in the back seat of the car.

Throughout the morning, Golding has chatted in the same easy way with customers on the phone, and to delivery drivers dropping off batches of hormone-free chicken and locally-grown veggies. It feels a bit like being in your own family kitchen, but on a larger scale.

Part of the reason for this familiarity is that Golding describes many of her customers as “people just like me”. As a mum of three primary-school-aged children, she admits to ordering a couple of Dinner on the Table meals for her own family each week. 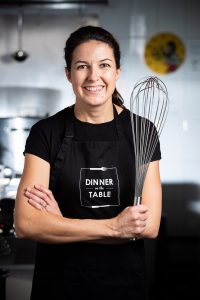 “One of the greatest ways you can show someone your love for them is to cook for them,” says Rachel Golding, creator of Dinner on the Table.

“The people who use our service as paying customers tend to be busy working women with children … They want to feed their families a good-quality, nutritious meal, but they just don’t have time to cook it themselves.”

The benefit of the service is tangible. “At the end of the day, and when you are at the end of your rope, having dinner taken care of gives you more energy to invest in the people you love,” says Golding.

For those families living with disability, the benefits are (quite literally) priceless. Golding explains: “The feedback we’ve received from the families who have been gifted meals has been extremely positive. People really appreciate the fact that it saves them a huge amount of time. It also has a financial impact. When they are receiving meals from us, their grocery bill goes down.” She notes the significance of this saving for families with disability, who often have “extortionately higher” living expenses.

The abundant grace of the gifted meal program is evident in the way it operates. Families are given a code to use on the Dinner on The Table website and are asked to “order enough food to feed themselves twice, each and every week”. There are no restrictions on the dollar amount they can spend or on the amount of food they can order for each family dinner. And the meals are delivered free of charge.

“A couple of times we’ve had families come back to us to ask if they can order enough to feed the household three times a week. One particular family has a mum who is going through chemo and she has an adult son with a disability living with her. And so, we were able to do that,” says Golding.

Families join the gifted meal program through word of mouth, as well as through partnerships with a number of disability services. These include The Hills School in the nearby suburb of Northmead, which caters for students from kindergarten to Year 12 with intellectual, and often physical, disabilities.

The symbiotic relationship between Dinner on the Table and this school community “has been a huge joy” for Golding. Last year, the team began collecting all the veggie scraps from their cooking as compost for the school’s kitchen garden. In return, Dinner on the Table has free access to the herbs and vegetables growing in the school’s garden. These are then used in dinners that are gifted to families, many of whom are members of The Hills School community.

“We try to provide meaningful support over the long term.” – Rachel Golding

While Golding is keen to keep adding families from the school community, and elsewhere, to the gifted meal program, she is careful to ensure their support remains personal and long-term.

“Rather than a scattergun approach with one meal or a couple of meals to a large number of families, we try to provide meaningful support over the long term,” she says.

According to Golding, the generosity of their gifted meal program reflects Christ’s love. While Dinner on the Table is not “an overtly a Christian mission”, Golding believes the gifted meals “speak volumes about the generosity that Christ showed us”.

Dinner on the Table

One woman tells the tale of a dinner gone terribly wrong

User's guide to sex and pregnancy

User's guide to sex and pregnancy

And how to get back in the sack after having kids

Free meals and Bibles – here's how to show community love

Free meals and Bibles – here's how to show community love

Thinking outside the chair: how one woman started a revolution

Thinking outside the chair: how one woman started a revolution

When Marni Walkerden was abused for parking in a disabled car space, she didn’t intend…

Australia is leading the world in disability-inclusive aid strategy

Australia is leading the world in disability-inclusive aid strategy

CBM calls for the funding to match it