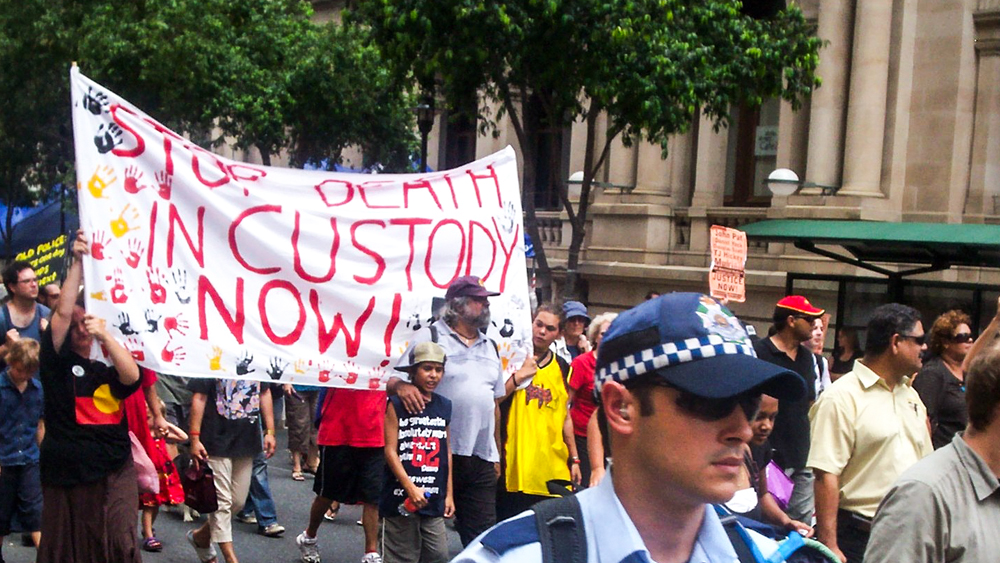 Time for action as database reveals 147 Aboriginal people have died in custody in the past 10 years.
djackmanson/Flickr (edited)
Current indigenous

As an Aboriginal Christian leader, Ms Prentis is again asking the church to act, as a new investigation into the deaths of Aboriginal people in custody has been released by Guardian Australia.

407 Aboriginal people have died in custody since the end of the Royal Commission in 1991. – Guardian Australia

“I’ve been asking Christians and churches to get involved because this is one of the foundational justice issues that our nation faces – the lack of justice and that we keep having Aboriginal people dying in custody,” Prentis told Eternity.

Guardian Australia’s investigation examined every known Indigenous death in custody in Australia from 2008 to 2018. The aim was to provide up-to-date and accessible information about these cases, in which evidence was often hard to find. This meant sifting through 463 coronial reports, where they found “a record of systemic failure”. Details about each of these deaths are now available to the public through a searchable database called “Deaths Inside.”

“We need to be outraged, and that outrage should drive us to action.” – Brooke Prentis

“Aboriginal people are dying, and we’re dying so young. Many of these people dying in custody are under 40 years of age. It needs to stop,” says Prentis.

“We need to be outraged, and that outrage should drive us to action.”

In their research, Guardian Australia also compared Indigenous and non-Indigenous deaths in custody over a five-year period. The results showed “stark differences in the treatment Indigenous people receive,” according to their website.

One of the key differences is access to medical attention. The investigation found that Indigenous people in custody are much less likely than non-Indigenous people to receive the care they need.

In fact, medical conditions were the known cause of half of Aboriginal deaths in custody during the past 10 years.

Prentis notes that immediate access to medical attention was one of the key recommendations of the 1991 Royal Commission. However, in the 30 years since, she says “only a handful of the 339 recommendations have ever been implemented.”

This failure to give adequate medical attention is reflected in the stories of many who died, which are now published on the “Deaths Inside” database. These stories include Miss Dhu’s, who was arrested for unpaid parking fines and later died of a severe infection after police officers accused her of “faking it”.

Ms Prentis also provides a human face to another of Guardian Australia‘s findings: that families are waiting up to three years for coronial inquest findings in some states. “We have to beg for these coronial inquests. It should just be automatic, and then we’re waiting for years for the inquests to take place. We live and breathe this every single day,” she says. 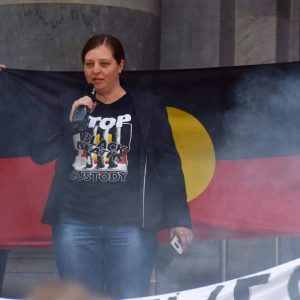 “This is one of the foundational justice issues that our nation faces,” says Brooke Prentis.

With pain in her voice, she notes the coronial inquest taking place this week for Wayne Fella Morrison, who died in 2016 and was also “the brother of a very good friend”. Morrison died of asphyxiation after being forcibly restrained with a spit mask on his face and placed face down in a van by a group of prison officers.

“We need prayer for the families as they go through this distressing time, as they sit through CCTV footage … in court and watch the last moments of their loved ones,” says Prentis.

In addition to the long wait time before and after inquests, she stressed the frustration caused by, what she describes as a lack of action afterwards.

“Out of each of these coronial inquests into these now 400 deaths in custody, there’s recommendations, and those recommendations aren’t being implemented,” Prentis states.

And so, Ms Prentis is urging the Christian community to advocate for change. “It’s good to have the information in a database like this. But what we need is Christians, driven by love and compassion and justice, to come alongside Aboriginal Christian leaders and Aboriginal peoples who have been fighting this for decades,” she asserts.

Prentis gives a few practical ways to do this:

In addition to praying for families of victims, Prentis encourages prayer for “truth and justice”. “Pray that there is no cover up. Pray for the coroner, as they review all the evidence [at inquests]. Pray for the politicians, that they will see it as a matter of vital importance to our nation,” she says.

Prentis urged Christians to become informed about Aboriginal deaths in custody and suggested this Common Grace article as a good starting point.

“I’ve been calling on people – for many years in my journey as an Aboriginal Christian leader, and following decades of calls from other Aboriginal leaders – to write letters to their local MPs, asking for those 339 recommendations [from the 1991 Royal Commission] to be implemented,” says Prentis.

She adds: “Aboriginal people’s lives have to be valued. Until these recommendations are implemented, we feel like lesser citizens than the rest of Australia and that our lives don’t matter.”

Prentis gives a final impassioned plea for the church to come alongside Aboriginal peoples, saying, “You are taking on a system and, I believe, that system can only be broken through the power of the cross. That’s why it’s important that it’s on the agenda of Australian Christians.”

“There are many justice issues that we face as Aboriginal peoples, and Aboriginal deaths in custody is just one of them. But it’s one that, I think, is fixable. We need our non-Aboriginal brothers and sisters standing beside us to bring truth and justice, and so healing to our nation.”

What the rest of Australia can learn from the first peoples

Brooke Prentis challenges us to not rest on the achievements of our past, but to…

The best book on Australian Christianity and the Aboriginal people is available again, now in…

Anabaptists to sign treaty with First Nations peoples on January 26

Anabaptists to sign treaty with First Nations peoples on January 26