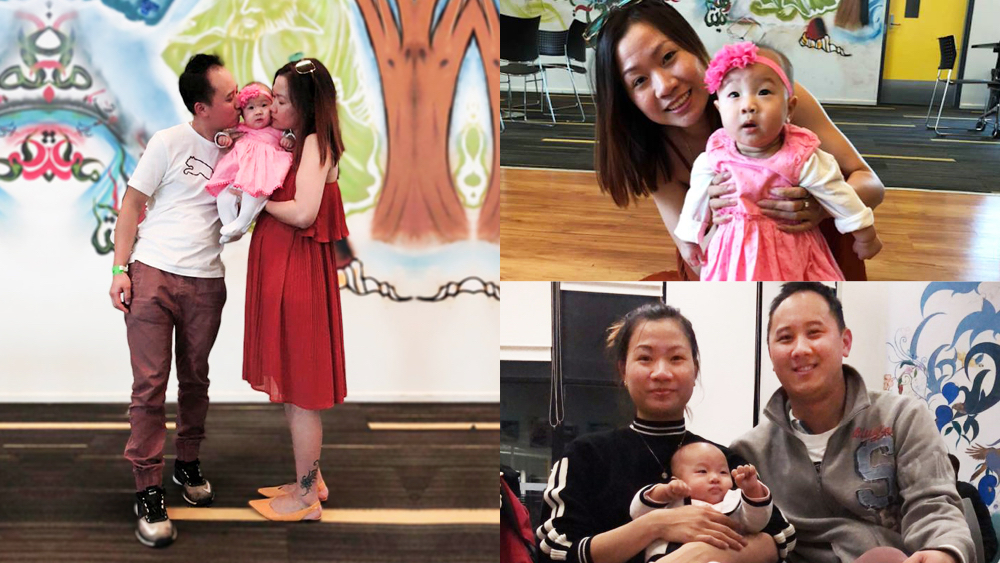 Mother might be forced to leave her baby in Australia

A Vietnamese asylum seeker who fled to Australia to escape persecution for her Catholic faith has her fate hanging in the balance, despite calls for intervention by Australian Catholic leaders, as well as refugee lobby groups.

Huyen Tran faced Melbourne’s Federal Circuit Court on Monday for a hearing relating to a specific decision by the Department of Home Affairs. While this hearing was not directly about Tran’s removal from Australia, she could be sent back to Vietnam at any time.  If she is deported from Australia, 29-year-old Tran will leave behind her husband, Paul Lee, and their six-month old daughter, Isabella. The family will be separated indefinitely.

“If I would be deported to Vietnam I could be sent to jail or even killed.” – Huyen Tran

But this is not the only fear surrounding deportation for Tran. She is also afraid of continued  persecution for her faith if she returns to her homeland.

“If I would be deported to Vietnam I could be sent to jail or even killed,” Tran said (through an interpreter) in court on Monday, according to AAP.

Just before Monday’s court hearing, Vincent Long, Catholic Bishop of Parramatta, wrote a letter to the Home Affairs Minister Peter Dutton, pleading for “urgent intervention on humanitarian grounds”. He highlighted the ongoing persecution of Catholics in Vietnam, and said, “Huyen fled this persecution in 2011. Because she arrived by boat, she has never had an opportunity to make a statutory claim for refugee protection.”

Long noted that Catholic asylum seekers who were returned to Vietnam from Indonesia last year were “harassed, arrested, and threatened with imprisonment”. He added, “Many continue to be treated harshly by the Vietnamese communist government.”

Pleading for the need for families to stay together, Long referred to the case of a Sri Lankan refugee family, where the father was deported, leaving behind in Sydney his wife and their 11-month-old baby. Long argued that the UNHCR – the UN Refugee Agency – had “condemned Australia” for this separation and urged the government to “uphold the fundamental principle of family unity, and allow family members to be together.”

Long concluded the letter by saying, “I urge the Minister to release Huyen and Isabella into the community, and allow for their protection here.”

However, these calls are falling on deaf ears, according to Peter Carrucan, a Catholic priest who provides pastoral care and conducts Mass each week at the MITA (Melbourne Immigration Transit Accomodation) detention centre where Tran is currently living.

“I know the bishops have issued many letters and contacted many in the Immigration Office but that’s all – it doesn’t get any further. It’s very hard to get an interview.”

While Carrucan has not lobbied directly for Tran’s release, he has approached Australian Border Force to allow the family to baptise their daughter in the local church, which he says “is only five minutes away”. However, despite the fact other groups previously have been allowed visits to this church, Tran and Lee were not allowed to baptise their daughter there. Instead, they were given permission for the baptism to take place at the detention centre, with a limit of six guests.

“Now that’s totally inadequate for a celebration of the baptism of your first child,” says Carrucan, noting that Tran has postponed the baptism until they can “do it properly”.

While the baptism may seem like the least of the family’s concerns, as devout Catholics, Carrucan says, “If we could make a breakthrough on having the child baptised in the church nearby, that would be one big burden off their shoulders.”

He also believes that this one concession could, in time, give way to another. “It may lead, eventually, to them listening to their requests for communal detention. Because the husband is living in a house that is all ready for Huyen and the child.”

If deported, Huyen Tran (right) will leave behind her husband, Paul Lee, and their six-month old daughter, Isabella. Rebekah Holt. Used with permission.

Carrucan first came into contact with Tran when he was working as a pastoral carer on Christmas Island in 2011. Tran, then 21, was one of many Vietnamese who landed in detention as an illegal immigrant after escaping her home country by boat.

He describes the religious persecution that led to Tran’s decision to leave Vietnam: “The area from which she is from is a very poor area, and an area where there is a lot of persecution of Catholics, especially, because there are many protests about the confiscation of church land. The Catholic people from that area are very devout and very strong, and very united in their opposition to the government.”

“Vietnam is a communist country and so the opposition to any kind of religion is pretty strong, unless it’s sanctioned by the government. Although there’s a core [of Catholics], they don’t have real freedom. They are very oppressed.”

Carrucan adds: “Nearly all the Vietnamese people who come to Australia by boat are from the same area – Vinh [in central Vietnam]. It must hit home to the [Australian] Government why these people are constantly trying to get on boats and find another life.”

This fits with Tran’s description of her persecution to the court on Monday. According to AAP, she said, “In the past because I just try to protect the statue of Jesus’s mother I was assaulted. I was given a hard time and I still have a scar on my head”.

Since arriving in Australia, Tran’s journey hasn’t become easy. After leaving Christmas Island, she spent time in a Darwin detention centre, then in community detention in Adelaide. After escaping, Tran ran away to Melbourne and met, then married, her husband Paul Lee, who is from Mauritius and is in Australia on a working visa. When Tran applied for a job and a tax file number, she was identified as an illegal immigrant and placed in the MITA detention centre, where she has been for the past year.

“She’s under a lot of stress … She’s battling with her child on her own.” – Peter Carrucan

Tran has already been “almost deported”. In January, she was “loaded onto a chartered flight to Vietnam, but she was eight months pregnant and so was taken off the plane just before it departed,” according to Bishop Long’s letter.

Back at MITA, after her daughter was born in March, Tran was asked to sign a document to place her daughter under her husband’s visa, meaning that she would not go with Tran if she was forced to leave Australia.

Carrucan expressed his concerns about the toll of these events on Tran’s mental health. After interacting with her at Mass most weeks, he says, “She’s under a lot of stress. She is also under great difficulty living in the unit she’s in, as she’s quite isolated from people. She’s not allowed to mix with other people in their units … So she’s battling with her child on her own.”

He notes that Lee visits his wife every evening after work and spends at least two hours a day with her. “He’s been doing that for 12 months,” says Carrucan.

This is despite the many protocols that exist in the detention centre. “Every time he has to visit, which is every day, he has to put in an application … They just make it more and more harsh. He’s been very loyal to his wife and child,” Carrucan reports.

And while the couple waits anxiously to hear if Tran will be deported or not, Carrucan will “do whatever I can to give her the kind of support I can offer, which is mainly spiritual support.”

He plans to try to talk with her tomorrow after Mass. There are time limits they will need to adhere to and their conversation will come under the watchful eye of security guards. Still Carrucan hopes that his continued presence at the centre will provide some comfort for Tran as she awaits her fate.

Asylum-seeker afraid for his future

Asylum-seeker afraid for his future