Australian entrepreneur Rebecca McDonald burst into tears of joy last month. The founder and CEO of Library for All – a digital library for young children in developing countries – had just heard a seven-year-old girl called Lovely in Papua New Guinea read fluently from an e-book on a tablet.

Only a year earlier, just before Library for All was launched in 12 schools across PNG, Lovely had been unable to read. Now, after reading books from the digital library every day for a year, she was reading beautifully. But it was the inspiration those books had generated that moved Rebecca to tears.

“She’s not only a seven-year-old who can read; she’s also got a future that she’s mapping out and aspiring to.” – Rebecca McDonald

“I asked her what she wants to do when she grows up and she said ‘Oh, I want to be a helicopter pilot.’ I said ‘Oh wow, that’s exciting – did you know that we have a book in the library about a female pilot?’”

“I was deeply impacted, as you can imagine. It just illustrates to me how much of a difference we are making on the ground … She’s not only a seven-year-old who can read; she’s also got a future that she’s mapping out and aspiring to.”

Seeing gains like this excite Rebecca and her team of nine who are steering the rapid expansion of Library for All, after many obstacles and setbacks.

Excitingly, Library for All is currently working to publish 10 books in the Gamilaraay language in partnership with linguistic specialist Dr Hilary Smith. Also, it has been funded to produce another 20 books in another Aboriginal language, which is still to be decided.

“Basically, since I started Library For All, I’ve been asked to produce books in Aboriginal languages,” says Rebecca who, essentially, is running a non-profit technology and publishing company.

“I hesitated for a number of years because I felt it was really ambitious and there’s a lot of political landmines around it. I just wanted to make sure we were ready.

“We really are ready now and I’m really excited about it. We’ve got great advisers around us and our technology is the strongest it’s ever been – and our publishing structure is really solid.

“It’s really the time for us to start this new endeavour and it’s so nice to be talking about working in my own country.”

Rebecca was inspired to create a digital library of culturally appropriate books for children in developing countries while working in Haiti. She was there with her husband as missionaries to help with rebuilding after the earthquake (they both have backgrounds in building and construction). 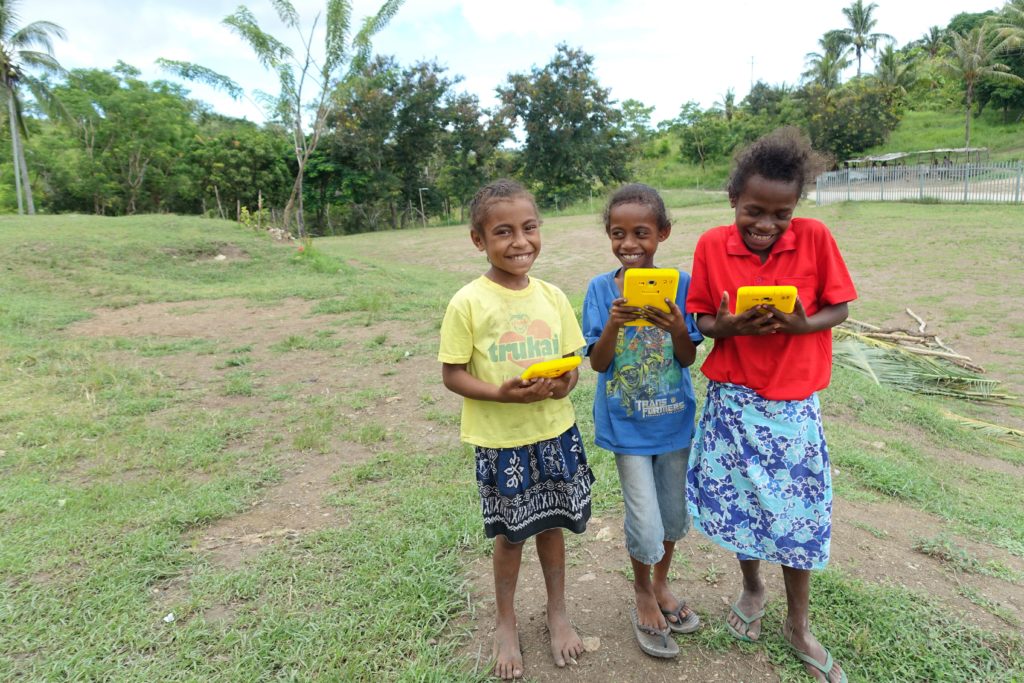 Students with PNG with their Library for All tablets.

About six months in, they started visiting schools that needed rebuilding and noticed none had any books. Rebecca naively assumed this was because of the earthquake, but it turned out the schools had never had any. Children were being taught by rote learning – by poorly educated teachers – with a lack of educational material or proper curriculum.

“I was really impacted by it because I’m a big reader, but I didn’t think that there was anything I could do about it,” Rebecca recalls.

While she and her husband were in a Florida hotel waiting for their visas to be renewed, Rebecca started looking online for an e-reader because she’d run out of books. Suddenly, she was assailed by a waking vision.

“God just gave me this very distinct vision of a cloud library that people were reading on their mobile phones. I remember jumping to my feet and I said, ‘I’ve had this vision!’ It was really distinct, and I can still remember what it looked like.”

With her husband’s support, Rebecca started researching the space, thinking she would find people to link up together. After three months, she hadn’t found any workable models.

“The closest I found were a group that were preloading Kindles and shipping them into schools – and that just wasn’t the picture, because the kids didn’t get to choose the books that were loaded,” she says.

“So after that I started going out to funders, pitching it to different foundations, and most of them would just laugh at me and say ‘there’s no way this is going to work.’” 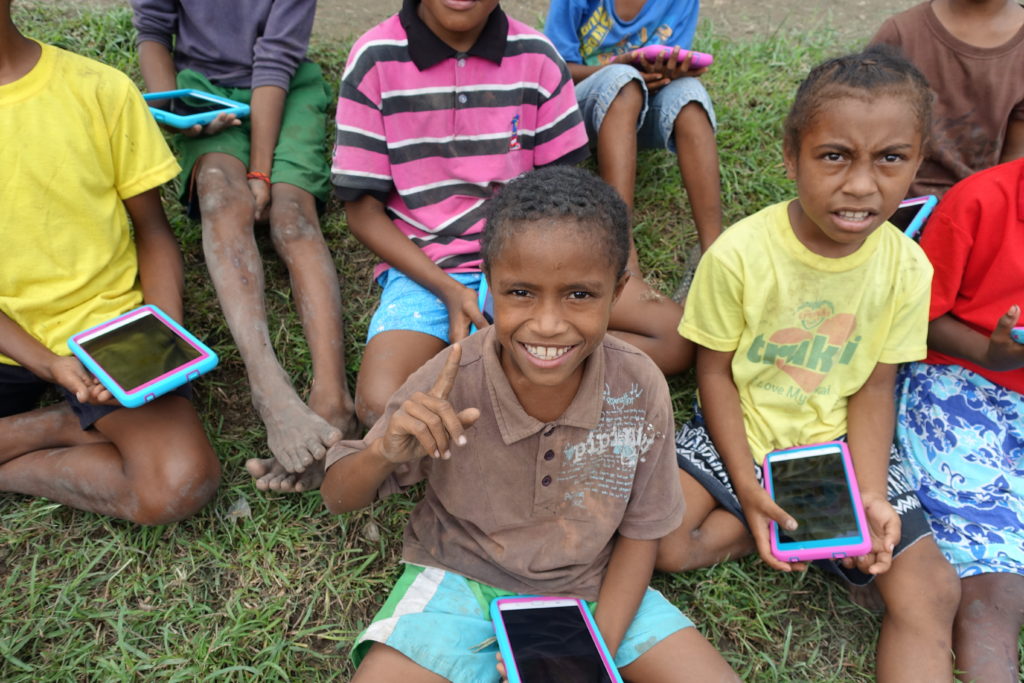 Students in PNG with their Library for All tablets.

Rebecca describes herself as a woman of grit and persistence who doesn’t take no as a final answer. She was confident God would open the right door at the right time.

In 2013, while pregnant with her eldest child, she launched a Kickstarter campaign that raised $110,000 and allowed her to launch a pilot program in Haiti. From the start, she believed it was important to specialise in books that would be a mirror to the young readers, so they could see themselves in the pages and aspire to what the characters were doing. She also wanted to provide them with more traditional books that were windows into a wider world.

“I remember the first day we launched in Haiti, and the kids were about five or six,” shares Rebecca. “I think we had about eight tablets that day – we had one tablet per four or five kids. I remember the first time they opened the books up and there were kids that looked like them and they ran around the room screaming. They said, ‘Look, look, they’re like me. This is in Haiti!’

“They couldn’t believe that it was their own country with kids that looked like them. That really stuck with me and that’s why we’ve focused so much on culturally relevant material.”

Being laughed at by funders at the outset turned out to be one of the easier obstacles Rebecca has faced in getting Library for All to its current scale.

“We’re essentially a non-profit technology company and we have had to build our platform and all of our infrastructure on next to no budget every year. Because we’re non-profit, we can’t do a funding round where we offer equity to investors, so we rely on funders and individuals to fund our work – so we’ve had to creep along at the rate of funding and that’s been really challenging.

“I see the need as so great. You think about 750 million-plus globally who are illiterate – 260 million of those are children – so it’s a big market that we’re trying to reach and often the poorest of the poor.”

Along with lack of funding and mobile phone coverage, another steep challenge has been having enough books to fill a library to keep children interested through their early years of primary school.

“In our experience, you need a minimum of 250 books to keep a child interested because if you have less than that – we’ve made this mistake before – they read through them too quickly and then there’s nothing to keep them going on their journey, no harder books for them to read, and so they stop reading.”

PNG students with their Library for All classroom kit.

“So, a minimum of 250 books and then growing to 500 for those early years – prep to grade 3 – because then you’ve got a learning journey for them. There’s enough in each of the levels for them to get excited about and to find books that they feel represent them.

“We really struggled for a lot of years in getting enough books to fill the shelves because the publishing industry in these countries is so small and underfunded. We ended up setting up a publishing company within the non-profit and we work with local authors now.

“In the last 18 months, we’ve published over 750 books – so we’re probably one of the biggest publishers you’ve never heard of.”

Thanks to a partnership with World Vision and ChildFund, Library for All is at the stage where it is negotiating an extension of the partnership in PNG for another eight years. Laos is opening up in September and negotiations are in train for three new countries.

By the end of June, LFA will have 500 titles by local authors published in PNG, chosen from thousands of stories submitted – many through Messenger or text message, because not everyone in PNG has an email account.

“The education officer for ChildFund did eight books for us. He just loved it and it’s been so incredible to see them flourish and get so excited about it because a lot of them are first-time authors. To be able to see their work published and beautifully illustrated and professionally designed – they can’t believe they’ve been given the opportunity to do it and we pay them a market rate for their work.”

These books are all available in digital form for free download from the Google Play store. In addition, LFA has printed 100,000 books which are included in teachers kits with training provided by World Vision and ChildFund.

Asked how she has been able to achieve these results with three young sons and no experience as a librarian, Rebecca says she thinks her lack of expertise has been more of a blessing than a curse. She paraphrases 1 Corinthians 1:27-29: God doesn’t call the qualified, he qualifies the called.

“For me it’s like, of course it should exist and, yes, it should be available in every community around the world.”

“Literacy underpins the rest of a child’s future; it underpins the entire rest of their lives. It’s a real privilege to be able to do something about it.”

Meredith Lake’s The Bible in Australia wins another accolade

Patricia Weerakoon, who laughingly calls herself a 70-year-old Christian sexologist, is excited about her latest…

Plus, you have the chance to *WIN* every book on this list