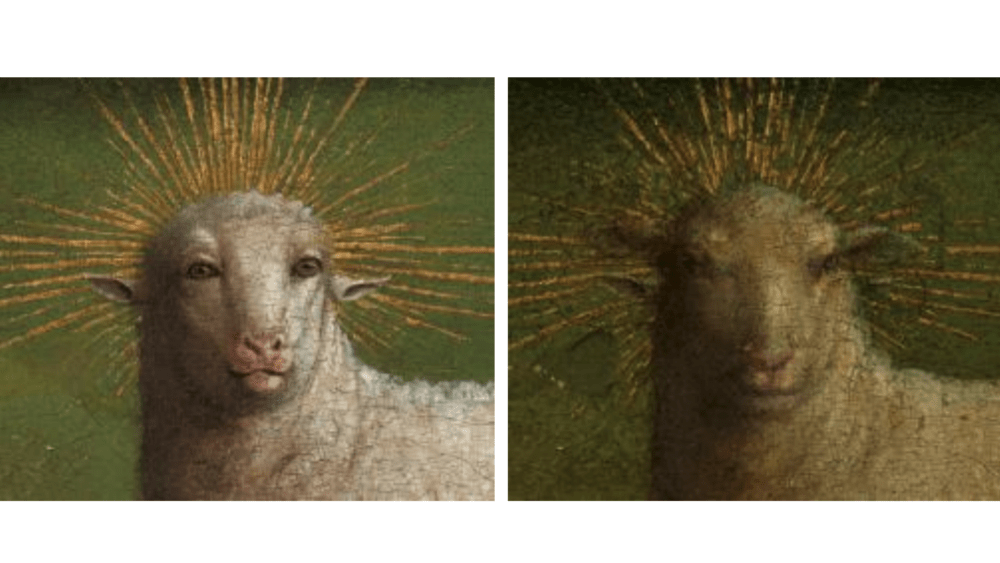 High cheekbones amplified by the sucking in of the cheeks and pouting of the lips. Disconcertingly direct eye contact. A slightly lifted chin communicating confidence. A flattering, metallic-flecked background.

Except it’s not. It’s a picture of the Lamb of God, peering into your soul from medieval Belgium, courtesy of the magic of modern-day art restoration. And it has Twitterers tweeting.

Lamb of God does actually refer to the metaphoric Lamb of God, Jesus Christ. Well, Jesus the Lamb as depicted by artist brothers Hubert and Jan van Eyck in 1432 on the Ghent Altarpiece of St Bavo’s Cathedral in Ghent, Belgium.

The work is the middle panel of the prized 12-panel masterpiece known as The Adoration of the Mystic Lamb. It was hidden from view since the 16th century when another artist altered the altar work, by painting over the Lamb’s face.

But in a restoration work completed off-site in December, conservationists have stripped away the overpaint,  to reveal an “alarmingly humanoid” face of the lamb.

“Perched atop its fluffy woolly-white body, the penetrating, close-set eyes, full pink lips and flared nostrils of the original lamb are, at a minimum, eye-catching, if not alarmingly anthropomorphic,” wrote Katherine J. Wu in the Smithsonian Magazine.

But although the lamb’s face is not dissimilar to that familiar, not-so-classic beauty of every instababe ever, we can’t blame social media’s “Instagram face” for this one.

Helene Dubois, who headed up Ghent Altarpiece’s restoration, explained to the The Art Newspaper that scientists were surprised to discover that about 70 per cent of the outer panels were obscured by 16th-century overpainting.

“This overpainting had been done so early on, and following the shapes of the original, with very similar pigments that had also aged in a similar way, that it was not actually visible on the technical documentation when the altarpiece first came in for treatment,” Dubois said.

“And nothing like this had ever been observed on early Netherlandish painting … [It was] a shock for everybody – for us, for the church, for all the scholars, for the international committee following this project.”

The original lamb has a more “intense interaction with the onlookers.”

The extensive altarpiece restoration project was done in full view of the public, inside a specially constructed laboratory at Ghent’s Museum of Fine Arts, and was financed by Belgium’s Royal Institute for Cultural Heritage. The first phase from 2012 to 2016 restored the outer eight panels. They were then returned to St Bavo’s Cathedral. The Adoration of the Mystic Lamb is part of the second phase that was completed in December last year and returned to St Bavo’s Cathedral for public display in January.

The original lamb has a more “intense interaction with the onlookers,” Dubois said.

A lack of any archival information about the brothers to shed light on the artist’s choice to humanise the lamb’s face – an obvious departure from the painting’s precise naturalistic style – means theologians and historians will now need to do further research to understand the Van Eycks “cartoonish” depiction, Dubois said.

Koenraad Jonckheere, a professor of Renaissance and Baroque art at Ghent University, speculated that the 16th-century overpainting was probably done to neutralise the “intense and humanised identification of the lamb into an expressionless animal”.

Some Twitter commenters suggested it was a case of modern art restoration gone wrong. Others wasted no time pulling out the puns and memes, with one declaring “a nightmarish restoration of the Ghent Altarpiece wool go down in meme history”.

Face of the Lamb of God in the Ghent Altarpiece. pic.twitter.com/9OY5aKRMdM

The Van Eyck brothers chose to “represent the Lamb of God with human-like staring eyes”, which was a common style in the Middle Ages, it said.

“The choice for removing the overpaint was carefully weighed out, and it was fully supported by all involved,” the institute said. “The results of the restoration have been praised by experts, the public and St Bavo’s Cathedral.”

In a world before the COVID-19 pandemic grounded the world – in February this year,…