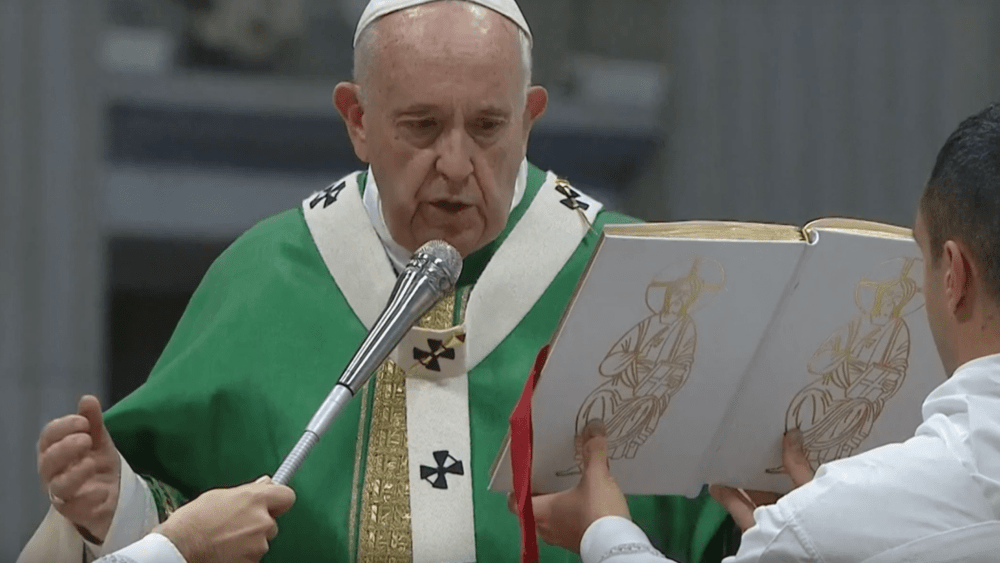 Pope Francis at Holy Mass on Sunday, for the closing of the Amazon Synod of Bishops.
Catholic Sat
Culture Catholic

Pan-Amazon Synod ends with focus on Indigenous Peoples, the poor and creation care

Pope Francis focused on helping the vulnerable and marginalised, at the end of an almost-month long Catholic Synod of Bishops for the Pan-Amazon Region.

“The cry of the poor, together with that of the earth, came to us from the Amazon,” said the Pope in a message on Sunday. “We cannot pretend we have not heard it.”

“The Church is called to accompany and share the pain of the Amazonian people.”

Media reports about the Amazonian Synod were dominated by issues of married priests and women’s ordination. These initiatives at the Special Assembly were some of the proposed solutions to the overall problem of “the Church’s precariously-thin presence” in remote communities.

Attendance at Catholic churches across Latin America has been dropping, while Pentecostal churches have thrived since the turn of the century. Some of this decline can be linked with, during the same period, the increased relationship between the Catholic Church and progressive politics in the region.

The Synod of Bishops want to make the Catholic Church’s presence in the region “broader and more incarnate”, so that “that there be not only the possibility for all the baptised to participate in the Sunday Mass, but also for a new heavens and a new earth to take root in the Amazon Basin in anticipation of the Kingdom of God”.

The Pope used prayers and scriptural readings during Holy Mass in St Peter’s Basilica to comment on the Synod, wrapping up weeks of discussion. He said the Synod had asked how to open up new pathways for the proclamation of the gospel, noting “we must go beyond ourselves” to live according to the gospel.

His comments followed Saturday evening’s decision, by the majority of the 184 Synod bishops and other clergy who voted, to approve a 30-page document called Amazonia: New Ways for the Church and for an Integral Ecology.

Released as a draft in June, the document will be presented to the Pope for his approval, then to local churches for acceptance. A finalised document would become part of the teaching of the Catholic Church internationally.

In the same vein as Pope Francis’ 2015 Encyclical letter Laudato si’: Letter on the Care for our Common Home, this working document outlines an holistic proposal to ministering to the people of the nine-country Amazonian region. Along with the region’s diverse inhabitants, the document also considers their complex relationships with the environment, society’s structures and systems.

“Already in the biblical stories of creation it emerges that human existence is grounded in ‘three fundamental and closely intertwined relationships: with God, with our neighbour, and with the earth itself,’ the working paper states.

“These three vital relationships have been broken, both outwardly and within us. This rupture is sin”

“Accordingly, the task of evangelisation invites us to strive against social inequalities and the lack of solidarity through the promotion of charity, justice, compassion, and care amongst ourselves and with animals, plants, and all creation. The Church is called to accompany and share the pain of the Amazonian people, and to collaborate in healing their wounds …”

The Amazonian region is socially and culturally diverse, with an Indigenous population of about three million people, representing 390 different groups and nationalities. In addition, it has 110-130 “free peoples” or “PIAV groups” (Indigenous peoples in Voluntary Isolation), plus “other groups which disappear into the urban fabric and are therefore called ‘invisible’.”

“It is a moral imperative for the Church.”

The working document also acknowledges the church’s history in the region, including that of forced slavery: “Until the beginning of the 20th Century, voices raised in defence of indigenous peoples were few and far between – although not absent.”

According to the document, the protection of Indigenous Peoples and their lands in the Amazon region “represents a fundamental ethical imperative and a basic commitment to human rights. Moreover, it is a moral imperative for the Church.”

What received most notice during the Synod, though, was Bishops proposing a controversial but narrow opportunity for married men – who are deacons – to be ordained as priests in remote areas. The final Synod document significantly noted that while celibacy is “a gift of God,” it is a “discipline” not required by the nature of the priesthood.

The proposal (not yet accepted or approved) states that “esteemed men of the community” could be ordained as priests if they “have had a fruitful permanent diaconate and receive an adequate formation for the priesthood, having a legitimately constituted and stable family”.

This proposal was raised in order to “sustain the life of the Christian community through the preaching of the Word and the celebration of the Sacraments in the most remote areas of the Amazon region.”

“Sometimes it takes not just months but even several years before a priest can return to a community to celebrate the Eucharist, offer the sacrament of reconciliation or anoint the sick.”

Similarly, the majority of the Bishops also called for the Vatican to reopen a debate on ordaining women as deacons, saying “it is urgent for the church in the Amazon to promote and confer ministries for men and women in an equitable manner, recommending further study on the historical nature of the issue.

In response, Pope Francis told the Synod: “What is said in the document falls short of what the woman is; in the transmission of faith, in the preservation of culture.”

“I am going to try to reconvene this [commission] with the Congregation for the Doctrine of the Faith and appoint new people in this commission and take up the challenge.”

A change in the wording of the Italian Lord’s Prayer, approved earlier this month by…

“It is pretty much one hundred per cent that Jesus preached here,” our tour guide…

In a letter to the world’s 1.2 billion Catholics, Pope Francis has delivered one of…