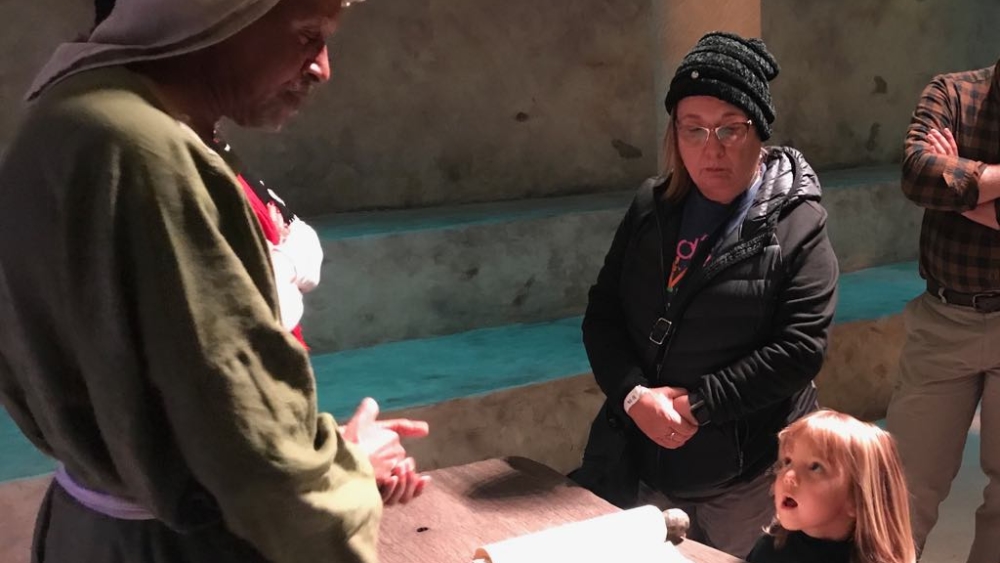 Museum of the Bible brings God's Word to life

One family’s guide to getting into Washington’s holy attraction

Do you want to see the lights go on in the universe or walk across the Red Sea? Rick Pekan, his wife Louise and four children did all those things – on holiday.

“Wow, it brought the Bible to life in a different way.’”

Visiting the 7-storey Museum of the Bible in Washington D.C., the Pekan family from Perth got into the Bible, its content and impact in a way they never had before.

“It helped to feel like we are part of the story,” Rick Pekan shares with Eternity about the day his family spent in the American capital, going through the interactive museum that was first opened in November 2017.

Part of Washington D.C.’s renowned district of museums near the National Mall, the vast showcase of all things Bible opens like the book it is devoted to – with a bang.

“The first thing you notice is there’s this huge gold scroll on the front wall of the building,” Rick says, still gobsmacked at its size.

The 40-foot tall, two and a half tonne bronze doors depict the text from Genesis 1, as rendered in an early edition of the Gutenberg Bible.

From here, the Pekans and the family friends they were travelling with passed through airport-like security – “It’s a secure place; they want to keep it secure” – into a visual representation of what God’s word hopes to share.

Tiles are black upon entry to the Museum but progressively become more white as visitors proceed through. “I interpreted it as you are moving to the light. That as you move closer to the Bible and engage [more] with it, the Bible is the light – the light of the world,” explains Rick, who is a big fan of the Museum’s bold design.

Linked by “cool” interactive guides which come with headphones, internal messaging (between your group) and GPS tracking of those in your party, the Pekans first did an overview tour before going their own way.

Rick Pekan (centre) and his family at the New Testament section of Museum of the Bible.

Different floors are dedicated to different topics or Testaments, from the Bible’s influence upon human history, to the history of the Bible’s formation and distribution. The “journey” taken on Floor 3 stood out to the Pekans, though. “The Old Testament experience was probably the highlight for most of us,” shares Rick. “It starts in this theatre, with the Genesis story. You see the stars popping up and the light and land popping up. Then, the door opens and you kind of go ‘on’ the story.”

“One of the experiences is you cross the waters of the Red Sea. It’s this huge digital [display] and it feels like you are walking through the Red Sea.”

“The highlight of it was not just watching different videos but it was walk on ‘this’ journey into a part of the Old Testament.”

The Pekans could touch rocks, cross divided seas and stop to talk with figures they had only ever read about in the pages of the Old Testament. By the end of that section of the Museum of the Bible, this Christian family was expectant: “It left you with the anticipation of ‘oh, I have to see what happens now.’”

Although Rick Pekan works for Bible Society Australia’s Church and Community Relations Team in WA, this long-time Christian still found the Washington D.C. museum visit placed him in The Greatest Story Ever Told in a new, pronounced way.

“Wow, it brought the Bible to life in a different way,’” says Rick. “It didn’t make us more or less faithful; it just sort of put these images in your mind … When we read the Bible passages, hopefully some of those images come back to mind and you can feel yourself as part of the story.”

“It brings you into an experience of the Bible that you really can’t get any other way.”

‘This Bible is so cool and we want you to feel it.’

Rick believes the Museum of the Bible is not just for ‘Super Christians’. While he highly recommends it to those interested in the Bible or Christian faith, Rick encourages anyone who wrestles with the Bible to visit – because they might be helped to understand its content, context, imagery and impact.

“Regardless of your view on the Bible, you will feel good in the Museum because it has a broader view.”

“[Museum workers] were very friendly. Like, ‘it’s really good to have you here.’ You felt like a guest and they were really excited about the Museum. And excited for you to experience it for yourself: ‘This Bible is so cool and we want you to feel it.’”

In an attempt to repress freedom and hope

Facts, manuscripts and historical accuracy are just some of the evidence for God’s Word

Spare a prayer for foster kids and carers

Spare a prayer for foster kids and carers

They need it now more than ever

The Museum of the Bible in Washington DC will repatriate 11,500 antiquities to the Iraqi…

The faithful few bringing revival to this city