Are you superstitious? Ever find yourself fretting over a broken mirror or knocking on wood after making a hopeful statement? Superstitions easily seep into our daily behaviour, even without us noticing.

What you might not know is lots of common superstitions have origins in Christianity or, at least, in Christian folklore. Here’s our top five:

5. Walking under a ladder

According to some sources, a few early Christians believed that an object with three points represented the Holy Trinity. Walking under a ladder would therefore be walking through the Holy Trinity, and was considered to be an expression of a person’s disbelief in it and declaring that that person was, in fact, in league with the devil. In some places, walking under a ladder could get you labelled as a witch.

These days, it just makes sense that you shouldn’t walk under a ladder, for your own safety as well as the safety of whoever is on the ladder. Common sense for the win.

4. Throwing salt over your shoulder

In Leonardo da Vinci’s painting The Last Supper, Judas Iscariot is portrayed as knocking over the salt shaker – and spilling salt was considered an unlucky omen in the Roman Empire. Today, many still believe that throwing a pinch of salt over your shoulder, after spilling salt, will avert the evil associated with the omen.

The tradition of throwing salt over your shoulder may also have originated with the belief by some Christians that the devil was constantly standing behind you, and that he could be distracted by throwing salt in his eye. 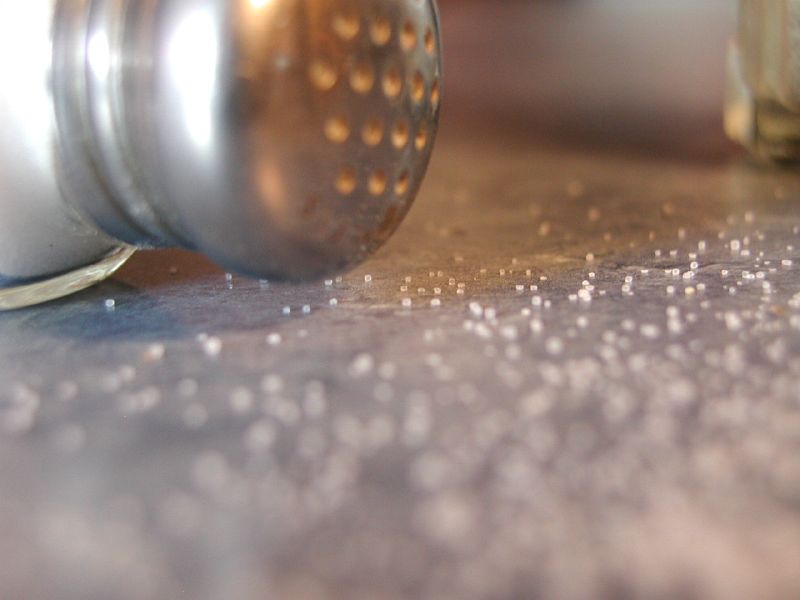 What is the origin of throwing salt over your shoulder? Karyn Christner1 License

In the Bible salt is an emblem of purity and the powerful influence of a holy life on others: “You are the salt of the earth. But if the salt loses its saltiness, how can it be made salty again? It is no longer good for anything, except to be thrown out and trampled underfoot.” (Matt 5:13).

It is still not uncommon in some parts of the world to put salt into a coffin; for it is said that Satan hates salt, because it is the symbol of incorruption and immortality.

Christian folklore says that when Adam and Eve were expelled from the Garden of Eden, Eve snatched a four-leaf clover with her to remind her of the happiness she had enjoyed there. As a result, if you find a four-leaf clover today, legend says you will be blessed with good luck and happiness.

In more recent history, Christians have claimed that the four-leaf clover has four parts just like the cross of Jesus. Each leaf symbolises faith, hope, love and luck.

In the 17th century, they were sometimes scattered down the aisle at weddings, to provide the bride with extra protection from evil spirits on her wedding day. For a single woman, the news is better: if she finds a four-leaf clover and places it in a shoe, the first single man she next meets will become her future husband. Sounds a bit risky, don’t you think?

Some people claim that this common superstition originates in Christian tradition. The story goes that there were 13 guests at the Last Supper, with the 13th guest being Judas, who ended up betraying Jesus.

Even today some planes will not have a thirteenth row of seats, and some apartment complexes skip the 13th floor, jumping straight from level 12 to level 14.

Known in the Book of Revelation as ‘The Number of the Beast’ (that’s the devil), the number 666 causes a lot of superstition, even among people who don’t believe in Jesus.

In popular culture, it has become one of the most widely recognised symbols for the devil. It is used widely by both apocalyptic Christian groups, and staunchly anti-Christian subcultures.

In the 1970s when financial institutions in Australia launched the bankcard (a shared-brand credit card), some Christians interpreted the logo as a 666. Most took it as a joke but some Christians were genuinely upset.

When former US president Ronald Reagan moved into a private dwelling at the end of his presidency in 1989, he had the number of the house changed from 666 to 668.

The number 666 has featured prominently in films including The Omen, Pulp Fiction and The Phantom of the Opera.

The Trinity, the Christian teaching of “one God in three divine persons”, is mentally challenging…

The four gospels of the Bible – the books of Matthew, Mark, Luke and John…