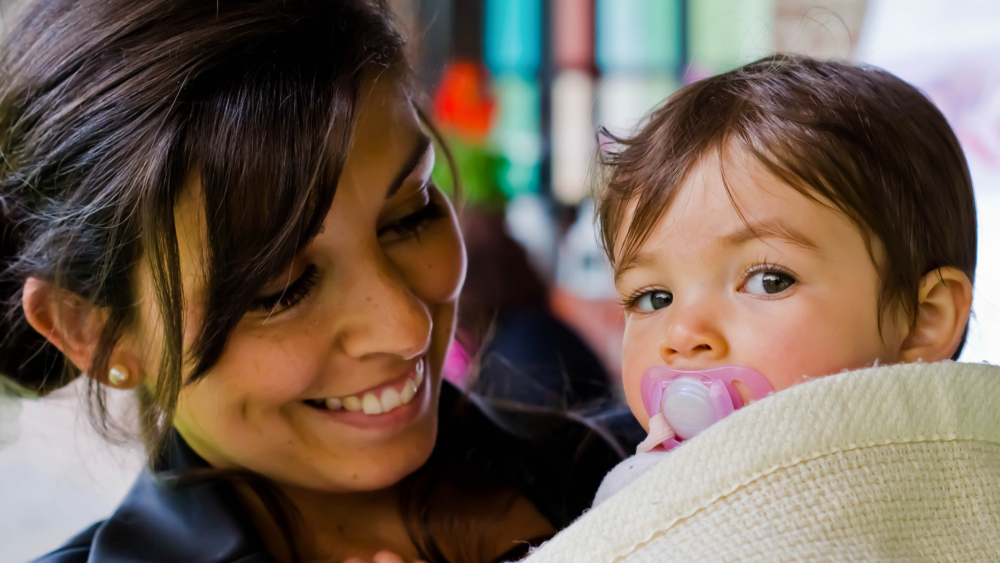 Ask any new mum how she’s faring and there’s a good chance she’ll focus upon the chaos of the first few weeks after birth. That draining and stressful time when she tries to adapt to a schedule that leaves no time for self-care and leaves her feeling like a milk factory.

As well, there often can be a sense of loss from having left her work role, where her skills were valued, she earned money and had a community of colleagues.

But it doesn’t have to be this way, according to clinical psychologist Lyn Worsley. As Director of The Resilience Centre in Sydney’s Epping, Lyn has collected research from all over the world into what helps women manage the transition from work to motherhood in a natural way.

“One of the things we look at in The Resilience Centre is what happens with those people who seem to adjust quickly and what it is that they’ve got that others don’t have, and we try to copy it,” she says.

Here are her four top tips for new mums:

1. Load up on positive relationships

When a woman leaves work, she loses three of the seven areas of life which Lyn has identified as giving someone significant strength. The three areas are skill, community and money. (See the other four at the Resilience Doughnut)

The women who flourish after having a baby tend to have what Lyn calls “social capital” – lots of positive connections to people who are on their team or champion them. This can include their partner, their family, and a group of friends at church or in the neighbourhood who are also having babies.

“They load up on positive intentional relationships.” – Lyn Worsley

Meeting regularly with other new mums, for example, to share stories allows them to maintain a sense of accomplishment and purpose in their new strengths. It also helps them to continue to feel like a real person.

“All of that seems to have a loading effect, so they load up on positive intentional relationships,” says Lyn.

“The mums that don’t do very well are often fixated on what they’ve lost rather than looking at the change. Quite often, the mums that aren’t coping are the ones that have got high-powered, controlling-type jobs and then they move into this zone where this little person is just not controllable.

“Sometimes those mums do quite well by getting a nanny in but they don’t really adjust to the mothering process. All they do is manage another aspect of their life and they go back to work. That still makes a resilient mum because they’ve still got their three strengths in place. [But] it may not help attachment with the child unless they’ve got some other things in place as well.”

“Until we’re nested in a group of people who are able to support us, we don’t actually grow.” – Lyn Worsley

Lyn says the lovely aspect of resilience research is how psychologically valid it reveals that being part of the body of Christ is. It is this that can help young mothers to grow.

“Until we’re nested in a group of people who are able to support us, we don’t actually grow,” Lyn explains.

“If you’re not in a relationship of significance with other people you can very easily dismiss what someone says about you and just go to someone else who makes you feel good. But when you’re in a community of people and you are connected, they are the people that can challenge you, help you to grow – say something to get you to do something different, give you feedback about yourself.”

“… If you want to build your resilience, you step in further and get more connected.” – Lyn Worsley

Yes, your strongest connections are also where you have the strongest levels of conflict, according to Lyn. But they also are where you’re more likely to resolve them.

“So you might have a strong family connection but, of course, families always come with lots of issues … In essence, what we’re saying is that is actually really helpful. Rather than saying ‘we’ve got to try and withdraw from people and give ourselves some time out, relax and do some mindfulness,’ in actual fact, if you want to build your resilience, you step in further and get more connected.”

2. Live by a family mantra

Creating a family mantra that encapsulates a goal or vision for raising your child can help new mums have a sense of why the struggle to get out of the house is worth it.

“Children need to learn social skills; otherwise, they won’t know how to reach out when they need to.” – Lyn Worsley

She advises mums not to feel they can’t go to playgroup because the baby needs to sleep. The baby can always sleep in the stroller and then wake up surrounded by familiar faces. Lyn says it’s important to ensure your baby has many friends around them, to build their own resilience.

“That helps when you make decisions with toddlers’ iPads and so on, because we really push on building the resilience of your child,” says Lyn about recommending that new mothers encourage their children to develop social skills. “That means helping them to become incredibly social. Even if they’re an introvert or from a quiet family, they still need to learn the social skills; otherwise, they won’t know how to reach out when they need to.”

Pessimistic thought patterns seem to be driving child-rearing at the moment. Think of the safety regulations at playgrounds – all guidelines are apparently based on the fear that something bad is going to happen.

“We don’t necessarily focus on removing anxiety; we focus on helping to flourish.” – Lyn Worsley

Lyn believes it’s important to challenge these thought patterns and think more optimistically. Otherwise, you will raise children who are overly risk averse and will not be willing to try anything new.

“At The Resilience Centre we don’t necessarily focus on removing anxiety; we focus on helping people to flourish,” she adds.

“If you’re flourishing it might mean that your anxiety means you connect with other people a bit more to help you to cope, in which case it becomes quite functional. So we don’t think about trying to fix your anxiety by putting a helmet on you; we think about how can you flourish a little bit better.”

4. Look outside of yourself

New mothers who are probably locked, for the first time, into a zone where they haven’t got control of their life can start developing insights into difficulties experienced by other people.

“As you start to think through the process of being a new mum and raising a child, often your own moral development is challenged,” says Lyn. “You start thinking about things from other perspectives as a process of developing a moral compass.

“The challenge is to help new mums to … care for others, even in the process of their challenges.” – Lyn Worsley

“However, what often happens in parenting is that they go back to the very beginning and become very ego-centric. In terms of resilience, the challenge is to help those new mums to start thinking about looking outside of themselves and caring for others, even in the process of their challenges.”

Find out more about Lyn Worsley

How to talk to your kids about COVID-19

How to talk to your kids about COVID-19

Be scientific. That’s the pithy strategy for speaking with your children about the coronavirus pandemic,…