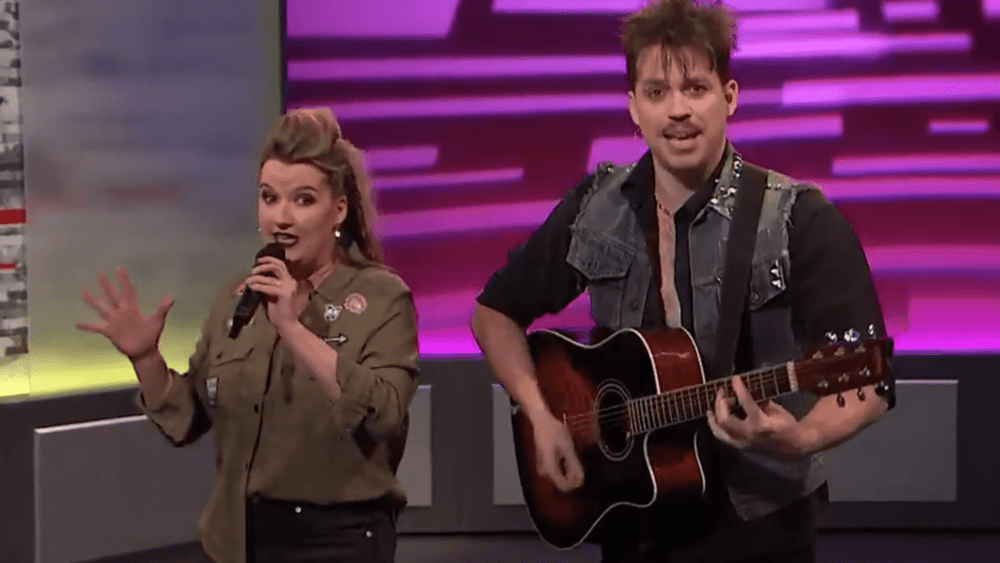 But Christians are used to being mocked, right?

So, there’s a show on ABC called Tonightly. This week, host Tom Ballard got stuck into new PM Scott Morrison about being an evangelical Christian. Ballard invited comedy duo Wyatt Nixon-Lloyd and Bridie Connell to perform a song about ScoMo’s faith. Calling themselves The Shadow Ministers, they launched into a “worship” song that mocked how ScoMo’s beliefs can be held alongside Australian immigration policies.

We’re not sure how much of a beat up this “outcry” is and suspect a broad range of responses by Christians, like there is on all issues. But for the record, here’s our two cents worth:

Despite some swearing and misuse of Jesus’s name, we found the song quite amusing. The lyrics are sharp, boppy and pointed. “We love Jesus, Jesus, but not refugees-us; if you want to win votes then you’ve got to stop boats.” Ouch. Also, the delivery is spot on and the timeliness of the material lends additional punch. “So don’t cross our border, even if you walk on water …”

The Shadow Ministers make a lot of claims about what Jesus told his followers to do and what it means to be Christian. “Jesus made the animals, like kangaroos, and he also said to lock the kids up on Nauru.” Um, no, he didn’t. “To do what pleases Jesus, deny them all visas; you can’t get more Christian than that.” Actually, you can. None of Jesus’s teachings or actions narrow down “being Christian” to such an equation. Also, Scott Morrison himself is unlikely to claim that all his administrative decisions directly reflect a teaching of Jesus. Followers of Jesus might well feel their faith minimised and cheapened by The Shadow Ministers’ jokey claims but, then again, this is satire … so that’s the whole point.

Outrage is a reasonable response to the song but it does raise the searing issue of living out Jesus’s teachings in the real world. That’s a challenge for all of us, let alone our politicians. So, when The Shadow Ministers tap into the perception of hypocrisy, Christians should hear that critique – and pray that their lives embody loving consistency.

The Shadow Ministers’ lyrics take a run at ScoMo’s Christian faith, but their look, energy and staging also poke fun at Pentecostal worship bands the world over and, to be honest, they’ve nailed it.  Who hasn’t seen a pentecostal worship duo that The Shadow Ministers remind you of? That full rhyme at the end of each line is bang on. And it’s nice to see the ancient wisdom of pente songwriters upheld: You gotta get to the chorus quick if you want it to be a hit.

Here at Eternity, we’re journalists and we totally get it. Do you know how many more clicks there are in an article that’s about both Hillsong and ScoMo? Kapow. What mere mortal can withstand such a temptation of the click? The Shadow Minister’s little ditty is a clever product that’s only going to help the ABC.

Incredibly, The Shadow Ministers got away with quoting the Bible – on Australia’s national public broadcaster! Awesome. A line from the Lord’s Prayer and Jesus’ “Suffer the little children to come unto me” (Matthew 19:14) gets dropped in, as well as a sly reference to the gospel accounts of Jesus famously feeding thousands of people (“fishes and loaves”, see Matthew 14:13-21 or Mark 6:30-44).

All the media outlets banging on about ScoMo’s faith and Pentecostal roots seem to be doing their darndest to galvanise the whole of Australia’s Pentecostal community – a pretty diverse group – under the umbrella of Morrison’s leadership. Quite the push for unity in the Body of Christ.

The Shadow Ministers might have kept some laughing for a full two minutes and twenty-five seconds but we’re not convinced their tactics are as brilliant as they are funny. Exactly why left-leaning media is intent on telling all Pentecostal Christians that ScoMo’s their guy is a bit of mystery to us. But we’re glad the ABC didn’t let good strategy get in the way of taking a shot at Pentecostals because the LOLs are worth it. (For us, at least, if not for the campaign to get #kidsoffnauru.)

Would the ABC have run a similar parody song attacking the beliefs and values of a Muslim MP? Just asking.

Christians expect to be mocked. Comes with the territory. What we signed up for (see Matthew 5:11 or 2 Peter 3:3-4). But we should have broad shoulders, given that the leader of our movement took the entire world’s sins upon his.

We also noted that although Tom Ballard’s Tonightly has already been axed from ABC, Jesus is the same yesterday, today and forever (Hebrews 13:8). He’s not changing or going anywhere.

Good thing it’s all about him, then, and not ScoMo or TomBa.

Prime Minister mocked for his faith

Suburbicon is directed by George Clooney, co-written by the Coen Brothers and stars Matt Damon…

Key lessons about responding to mockery and public criticism