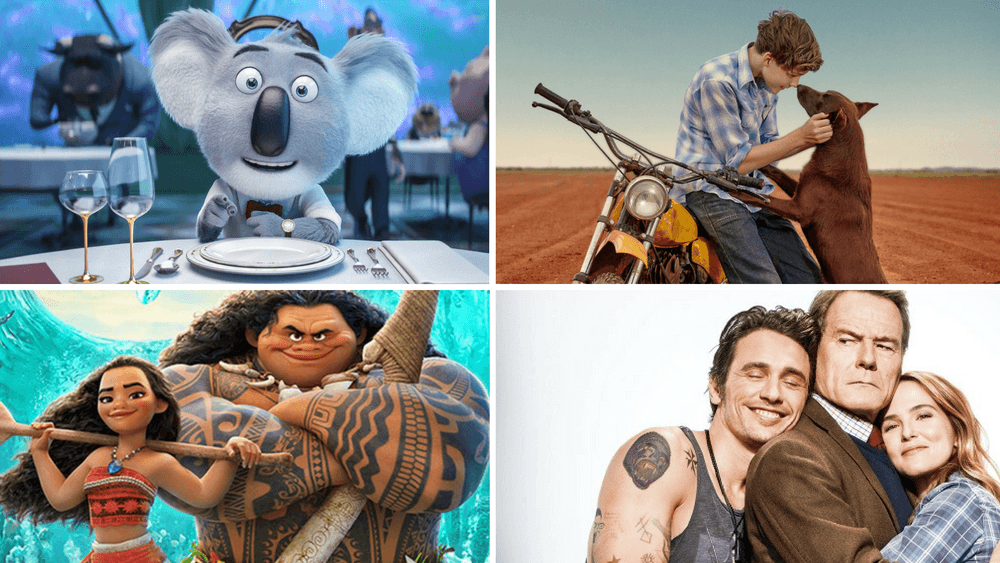 Find out what families will find in Moana, Sing and Red Dog: True Blue

Boxing Day looms large on the big-screen calendar. Having stuffed yourself silly, what else would you rather do than escape the blistering heat and be entertained for a couple of hours?

This Boxing Day, at least four major new releases are competing for your family’s wallet. But what should you and your film flock go to see? Check out Eternity’s quick guide to Boxing Day movies to know what you are in for at a cinema near you.

WHAT’S IT ABOUT: Disney’s latest animated adventure is located in the Pacific Islands.

Moana (voice of Auli’i Cravalho) is an island princess who sets out to break an ancient curse that threatens her people and her homeland. She seeks help from demigod Maui (voice of Dwayne Johnson).

WHY BOTHER: Moana has already made a tonne of money in the USA. This girl-power animated outing might just be the next Frozen. But keen viewers will swiftly pick up that Disney’s Moana operates in a universe populated by mythic gods and spiritual forces. Some parents will want to tread carefully with such on-screen views, while others will embrace the opportunity to speak with their kids about the beliefs of different cultures.

WHAT’S IT ABOUT: An animated animal musical full of superstar vocals, centred around a koala called Buster Moon (voice of Matthew McConaughey). He runs a theatre that’s going out of business. To revive it, he aims to put on the world’s best singing competition, which is going to involve creatures with the lungs of Reese Witherspoon, Scarlett Johansson and many more.

WHY BOTHER: Word on the street is that Sing – more than Trolls or Moana – will have the whole family dancing and singing in the aisles. Plus, this nice little musical isn’t pushing a strong message that parents will have to help their children sift through.

WHAT’S IT ABOUT: A prequel to the super-successful Australian family film Red Dog (2011). Although that 2011 movie was based on a true story, Red Dog: True Blue presents another yarn that allegedly inspired those on-screen adventures. In this outing, young lad Mick (Levi Miller) is growing up in remote northern WA. His best mate is a dog, and the two get involved in small and big capers.

WHY BOTHER: Red Dog was a lovely little movie that had wide appeal. But this prequel does struggle to have the same spark and heart as the original, and is unlikely to have the same impact. One of the most notable things about True Blue, though, is its depiction of a boy trying to find his way to being a man. Where does Mick find his values, beliefs, guidance and wisdom? Who is helping him, and how are they helping? What might you want to do the same – or differently – if Mick was your lad?

WHAT’S IT ABOUT: Parents with adult children might be tempted to check out what seems to be a new spin on the Meet The Parents template. Bryan Cranston (Breaking Bad) is Ned, a dad who is horrified at the bloke his daughter wants to marry. Played by James Franco, Laird is a crass and rich loudmouth that Ned is eager to remove from his daughter’s life.

WHY BOTHER: If you don’t want to check out any of the all-ages family films this Boxing Day, Why Him? might be an alternative. But it is rated MA15+ for strong crude sexual humour and coarse language – so that should provide a clear indication of what you’re in for. But this adult comedy about a dad battling his future son-in law might well stir up deeper consideration about the marriage choices which you would like your kids to make.

In a world before the COVID-19 pandemic grounded the world – in February this year,…

If the Pacific Islands drown, most of the refugees will be Christians

If the Pacific Islands drown, most of the refugees will be Christians

The actress, the tram and grace (in the last line)

The actress, the tram and grace (in the last line)

Australian actor Anna McGahan on the day she understood grace

And how the church has come to the rescue

Alex Kendrick opens up about ego, criticism and identity

It was refuted one month ago, but a false rumour about Hillsong and a Liberal…

The unique NT trek to support the homeless

A Beautiful Day in the Neighbourhood looks sweet, but it bites