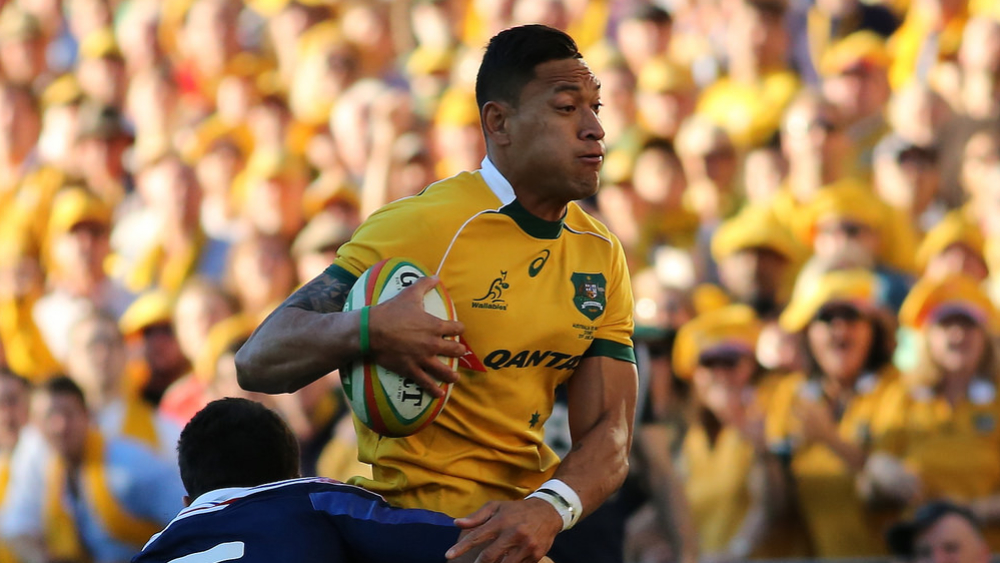 Israel Folau not only scores a record amount of tries on the rugby field, but he sets social media alight.

Eternity asked a panel of Christian leaders to comment on Folau’s most recent and controversial Instagram post which warned “Adulterers, Liars, Fornicators, Thieves and Idolaters” – as well as gay people – that “Hell awaits you.”

It’s likely that Folau was basing his comment on a particular Bible passage: “Don’t you know that the unrighteous will not inherit God’s kingdom? Do not be deceived: No sexually immoral people, idolaters, adulterers, or males who have sex with males, no thieves, greedy people, drunkards, verbally abusive people, or swindlers will inherit God’s kingdom. And some of you used to be like this. But you were washed, you were sanctified, you were justified in the name of the Lord Jesus Christ and by the Spirit of our God.” (1 Corinthians 6:9–11, CSB)

Dominic Steele from Village Church in inner-city Sydney wishes Folau had seen the grace in those verses, and adds a prayer.

Oh, Izzy. We need to show the world grace.

When the Apostle Paul wrote 1 Corinthians 6:9-11, he was reminding the Corinthian Church they were sinners before our Almighty God. But Paul immediately, spectacularly points his readers to the wonderful generous grace that’s ours in Jesus.

See that at the start of verse 11, ‘some of you used to be like this.’ That’s me. I was one of those. I did a number of those things. I suspect it’s you too.

So I cling to the beautiful wonderful fantastic next sentence, ‘But you were washed, you were sanctified, you were justified in the name of the Lord Jesus Christ and by the Spirit of our God.’

Izzy, please, be like Paul. Remind and reassure any confused and insecure Christians of the mercy of God, and call on the rest of the world to join us in putting trust in the forgiveness that is available in Jesus.

Lord God,
I admit I have failed you and rebelled against you.
I confess I can see myself in this list in 1 Corinthians of sexual immorality, idolatry, adultery, people who have had homosexual sex, stealing, greed, drunkeness, abuse and swindling.
Thank you that in Jesus Christ’s death and resurrection, you have washed me, sanctified me and justified me.
Please help me to trust you in this.
Amen.

Christie Buckingham of Bayside Church in Melbourne, a Pentecostal like Folau, wants to ask Izzy why he appears angry.

Does he actually know anyone who struggles with the complex issues that he so easily spills off his tongue? Has he any words for hurting and confused people? Why do people turn to drink? Why do they turn to idolatry? Surely Israel would see idolatrous behaviour in his industry all the time – some would say sport is like a religion and those involved are remunerated like idols?

Does he feel judged? Does judgement or love draw him towards God? How has his experience of faith informed his views?

Has he ever really experienced grace? From my initial observation he doesn’t speak as someone who has. Is this something he should consider?

Do his words draw people towards Christ or away from Him? Do his comments attract faith conversations with people that actually lead them into further inquiry about God and the good news of the Gospel? In my experience it is the kindness of God that leads people to repentance, not judgment. The way of Christ is not the way of condemnation. I would encourage Israel to focus on the things that draw people towards faith and not those that repel. He can do a lot of good for the kingdom of God if he focuses his energy in that direction – he is young and I really trust he has some great people around him. I don’t envy the pressure of his fame and potentially the sense of duty to use his position.

Simon Smart, Centre for Public Christianity wants Izzy “to adopt an entirely different posture towards the culture he is hoping to influence.”

In the current climate of distrust, polarisation and simplistic sloganeering, I’d want to convince him of the need for thoughtfulness and sensitivity to how his words will be heard.

Good communication matters, and Folau’s clodhopping use of the Bible — with verses ripped out of context and lists of “sinners” bound for hell, without any sense of the broader story — distorts the core message of the text and its offer of abundant life for every person who would accept it.

Christianity undoubtedly says uncomfortable things to all of us. But to pull out a list of particular groups, while leaving others out — those who exploit others for profit, or religious hypocrites for example — is arbitrary and clumsy at best.

To a largely post-Christian culture, Folau could use his profile to invite people into a vision of the world that tells us the universe is built on love and not chaos, that every person is a precious child of the creator — a God who longs for relationship with his children, and who goes to great lengths to make that possible.

Perhaps that would be a better starting point for Izzy’s next social media strategy.

Lyle Shelton, an Australian Conservatives Senate candidate, wants love as well as truth to be seen.

What I would say to Israel Folau is I admire your courage but encourage you to speak the truth in a way that people can understand that it comes from a motivation of love. Recognise that society is largely Biblically illiterate.

People need greater context in which to understand from where Christians are coming with regards to Biblical morals.

Canberra minister Ian Powell speaks as a rugby follower too

Rugby Australia has said: “The content within the post is unacceptable. It does not represent the values of the sport and is disrespectful to members of the Rugby community.”

Many members of the “Rugby community” may feel Rugby Australia is being disrespectful by condemning what the New Testament clearly teaches – tolerance does not mean you have to agree with me, us or our major sponsor.

I’m not saying that what Izzy said was well put. It’s just worth noting how ordinary classical Jesus-type teaching is now totally unacceptable to the elites. Nothing really changes much on that front.

Still Jesus loves, dies and saves — even scumbags like me and Izzy — and you?

I love you, brother, and I know that you’re probably feeling under attack right now, but I wonder if you realise how damaging your words have been for so many people who are feeling attacked by you.

It must be really difficult to hold to your faith in the glare of the spotlight — and I seriously respect the fact that you do — but these kinds of simplistic social media statements on complex issues do nothing but cause harm. It’s not OK. God is not in it — that much is simple.

Please remember that you are speaking about people who are created in the image of God, and who deserve so much better than careless memes and loveless judgment.

May the grace of God be with you and guide you.

Nathan Campbell is blogger and a pastor at Living Church, Brisbane. He wants to talk about teamwork

I love the way you play football; you’re an exceptional talent using the gifts God has given you for his glory. I also love your passion to see people confronted with the wonder of the gospel. When you play football, you play with a team. Even though you’re an exceptionally gifted athlete and might carry team mates on your shoulders from time to time, you don’t play a solo sport. It seems a shame to me that you could be feeling the pressure to use your platform to go solo to help people meet Jesus.

You’ve got a whole church community who can share that task with you. I’m worried that your ‘going solo,’ especially on social media, undermines the gospel.

As a team mate, I’m worried that your controversial posts make sin a bigger deal than Jesus — just because, in them, Jesus seems tacked on as the solution to a problem (sin and hell), not as the ultimate source of truth and life.

I’m worried that social media isn’t a great forum for the sorts of conversations that might help people understand the Gospel — that people don’t understand the word ‘repent’ or the concept of ‘sin’ without context, and that your team (‘the church’) are part of what makes the love of God and truth of the gospel plausible.

I’m concerned that posts like this one aren’t being ‘wise’ in the way we act towards outsiders (Colossians 4). That they aren’t ‘full of grace’ (even if repentance and grace are tacked on to the end), but are heard as being full of condemnation in a way that makes it hard for your team to score.

Why Israel Folau verdict affects all of us

Why Israel Folau verdict affects all of us

“Should there be freedom for him to do what he’s done, or not?”

Israel Folau and Rugby Australia settle out of court

Israel Folau and Rugby Australia settle out of court

Israel Folau and Rugby Australia have reached a confidential settlement, avoiding a courtroom battle over…