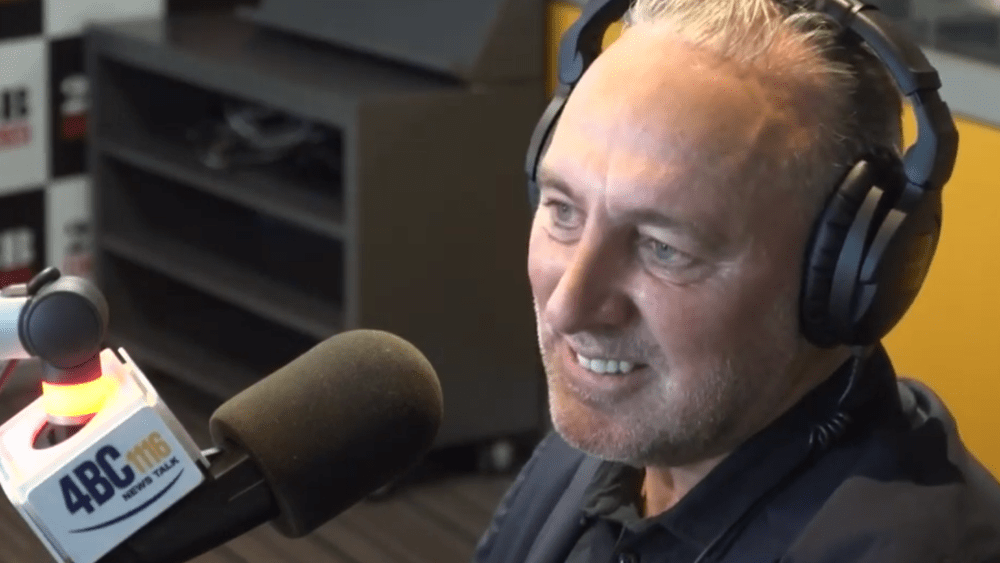 “I have got nothing to hide, Ben,” Hillsong Global Pastor Brian Houston told talk radio host Ben Fordham this afternoon on 2GB Sydney and 4BC Brisbane, when the subject of his father Frank Houston came up.

Brian Houston was the president of the Australian Christian Churches when Frank’s pedophilia came to light. His son Brian stripped him of his “ministerial credential” – removing his right to be a pastor. But Fordham raised the lingering issue of whether church discipline against Frank Houston was enforced.

The Newcastle Herald has obtained a video of Frank Houston preaching at Maitland Christian Church after he had been disciplined by his denomination. Fordham played part of that recording to Brian Houston on air.

“In the recording, Frank Houston talks directly to young boys in the church, including ‘This curly-headed young man … what a fetching young fellow he is. Curly hair, sort of. Good looking,'” the Newcastle Herald reported.

“‘It’s not your fault you’re good looking. Thank God you are. Who wants to be ugly when you can be good looking?'”

These comments are chilling when Frank Houston’s pedophilia is taken into account. But as revealed to the Royal Commission into Institutional Responses to Child Sexual Abuse, the notice of Frank Houston’s defrocking (as it would be termed in some other churches) was simply described as “serious moral failure” in the notice sent out to Australian Christian Churches’ ministers. There was no mention of children.

A second Hunter area church, Coastlife in Erina – headed by Ian Zerna – asked if Frank Houston was allowed to preach.

In April, 2004, The Newcastle Herald reported that the ACC “advised Mr Zerma that Frank Houston was ‘found to have been involved in serious sexual misconduct and his credential removed with the understanding that it would not be reissued'”.

“He was also given instruction not to engage in public ministry. Apart from what could be considered ‘public ministry’, it is up to you as the senior pastor of an autonomous Assemblies of God church to determine the involvement of members of your congregation. The executive would request, however, that you consider this matter carefully in relation to Frank.”

Eternity can reveal that Frank Houston, immediately after he was disciplined, had been banished from Hillsong into the care of another church in north-west Sydney.

Each Sunday when Houston came to church, he was escorted by a Assistant Pastor who stayed with him to make sure he was supervised at all times. He did not preach at that church after he was disciplined.

When he had preached at that church previously, his dementia meant that he repeated the same mini-sermon again and again. “It was very embarrassing,” a source tells Eternity.

This reinforces what Brian Houston told Fordham today, in relation to his father’s comments about boys, that he was “not surprised by anything [his father] might have said, because by that stage he was not lucid.”

It also backs up evidence in the Royal Commission that Frank Houston was not considered to be a threat any longer, due to his deteriorating mental health.

“To be honest, I wish they had taken a harder line.” – Brian Houston

In the radio interview, Fordham pressed Houston on whether people should have known Frank Houston was a pedophile.

Houston responded that, by 2004, the entire Hillsong church knew what Frank Houston had done – and that there was more than one victim. “By then I had told the whole Hillsong Conference.”

In regard to Zerna, Brian Houston told Fordham: “Ian Zerna knew exactly what he [Frank Houston] was accused of.”

Brian Houston added that regarding the letter from the ACC to Zerna: “To be honest, I wish they had taken a harder line. Frank knew he was sacked. He knew he was not to preach again.”

Later in the interview with Fordham, Brian Houston said the Ministers at Coastlife and Maitland “were being silly because, by then, [Frank] had significant dementia.”

Bob Cotton, minister at the Maitland Christian Church has promoted the Frank Houston story in the media about this time of year, three years in a row: Maitland Mercury in 2017, Illawarra Mercury and 60 Minutes in 2018, and this year.

As Brian Houston told Fordham: “That pastor of a tiny church in Maitland, to be honest, is being fairly flexible with the truth. I knew he knew 100 per cent that my father had been accused of abusing boys.”

Pressed about whether he should have reported his father to the police – with Fordham verifying there is still an active police enquiry – Brian Houston answered: “I don’t know that; I will tell you why, he [Brian Sengstock, the victim] was 36 when I first found out about this – and he told me he did not want the police involved.”

Houston told Fordham he would do things the same in regards to the police. Houston stated that the law states an adult victim saying not to go to the police is a reason not to report to them. “[Sengstock] was adamant and confirmed that at the Royal Commission.”

The then-new NSW Child Protection legislation had been passed, creating a class of “mandatory reporters” at the time of Sengstock coming forward. But it had not been  proclaimed (put into effect) – and whether church ministers are covered by the new legislation is unclear, but it is sensible they should act as though they are.

“The Prime Minister and I have never had a conversation about that.” – Brian Houston

“I’ve known him since before he was in politics,” Houston said of Morrison. But “if people only knew how little I talk to the Prime Minister at all – it seems I am a lot more important in some people’s eye’s than I really am.”

He also corrected Fordham, pointing out that the Hansard does not record the PM calling him a mentor. Eternity has traced the use of that word back to a Nick Bryant profile of Morrison in The Monthly in 2012.

“I never heard that, before and I have never heard it since,” Houston says of any contact about the PM’s trip to America that made headlines around the world.“At first I thought ‘well no, I wasn’t,’ because it was news to me.

“The Prime Minister and I have never had a conversation about that.”

Editor’s note: A lesson, which should not be required, is that defrocked priests or ministers stripped of their credentials should not be allowed to take part in a service. It is surprising to me that two ministers thought it was okay. It would be helpful if notices of ministers being disciplined were made public in all denominations (as they are in some already).

“Every city needs a Mary Ann Dalby … the people’s friend.”