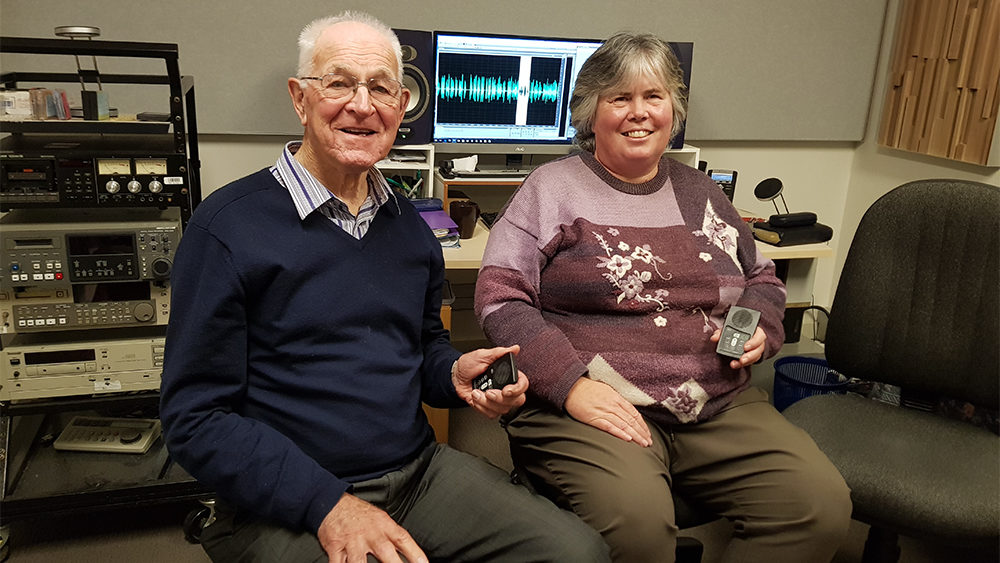 The medicine man and the playback machine

“Jimmy, he was one of these medicine men; these black magic guys,” is how Bible translator Greg Carlson, who works on the island of Tanna, Vanuatu, tells the story.

“I want to tell you a story about this man, old old fella. Jimmy means ‘old man’; Jimmy is actually a respectful term.

Carlson’s story is set about the time when a new translation of the New Testament had been launched. But it wasn’t the book that fascinated Jimmy. It was a machine.

“They had a machine, and it was their language. And Jimmy said, ‘What’s this?’ And so they said, ‘Ah, you need to go see pastor Joshua, and he has this machine.’

“So, one day, old fella Jimmy went down to the market and found pastor Joshua. He said, ‘I hear you have something with our language on it.’ Pastor Joshua pulls out his MegaVoice out of his pocket. And he says, ‘Yep, it’s right here.’ He says, ‘Tell me about it.’

“So Pastor Joshua dials up John 1:1 and they listen together through the whole first chapter of John. ‘In the beginning was the word. The word was with God, the word was God’, and how Christ came into the world.

“‘Well,’ Jimmy said, ‘I got to have that thing.’ So pastor gave him his MegaVoice. He went away for a week. And I don’t know what he listened to in a week, he could have listened to the whole New Testament because it’s 33 hours so quite possibly he could have. But he came back after a week and talked to Pastor Joshua.

“He said, ‘Pastor Joshua, all my life, I have been a ‘kleva’ [medicine man]. I grew up being a kleva, I’ve studied it, I’ve listened to my dreams. I’ve done what my dreams have told me. I’ve done what they’ve taught me. The other klevas have taught me and all my life I’ve done this. But now I know that that is not the truth. And what is on that machine? What is on this machine is the truth. Tell me about it.

“You talk about an open opportunity. Wow. So pastor sat down with him. He opened the word with him. I don’t know how long they talked. They probably started in Genesis and went through Revelation. At the end, Pastor Joshua said, ‘That’s the story, Jimmy, what about it? Do you want to become a Christian?’ He said, ‘I already told you. I know this is the truth. And I’m ready to become a Christian.’

“Guys, never mind, this isn’t the way we do it anymore.” – Jimmy

“Kleva” work in the Bislama language of Vanuatu means fortune teller or clairvoyant.

“Jimmy said, ‘I’m done.’ And they prayed; he received Christ at that moment.

“He said, ‘You need to talk to three of my understudies. And I’ll make an appointment for you to come up and tell them.’

‘I’ve been training them, how to be kleva – how to be witch doctors – but I want you to come and talk to them and tell them the truth.’

“He left Pastor Joshua and went about 100 yards away to where some of his men were working, working on a guy trying to heal him with their traditional ways.

A man, a message, a machine.

Two global ministries with strong Australian connections have joined together in the hope that more testimonies like this one will be told. Since 1988, MegaVoice has been producing audio Bible machines which can play in remote regions. Their latest models are compact, rugged and solar powered. Founder Tom Tresider began MegaVoice after serving Scripture Union and Bible Society in Australia.

“There has never been a more exciting time to utilise technology in fulfilling the Great Commission.” – Greg Low

Global Recordings Network (GRN) is, likewise, a well-established Bible ministry that has produced recordings in around 6,000 languages since it began in 1939. While it is a global ministry, as the name says, Australia is the key centre.

GRN and MegaVoice have established a new MegaVoice Media Centre in Sydney. This means churches and other ministries will be able to purchase MegaVoice devices and get them loaded with material in more than 7,000 languages within Australia. Previously, these would have to be sourced from overseas but Australian Christians can tailor there material here.

“There has never been a more exciting time to utilise technology in fulfilling the Great Commission.”

Chrisine Platt, CEO of GRN Australia, is also excited. “We live in exciting times, when the word of God can be heard in a person’s heart language. GRN are proud to partner with MegaVoice Australia in this exciting venture.”

360 million mobile phones, iPads and other devices can’t be wrong. That’s how many unique…

‘My children and grandchildren will be able to hear me sharing the gospel with them.’