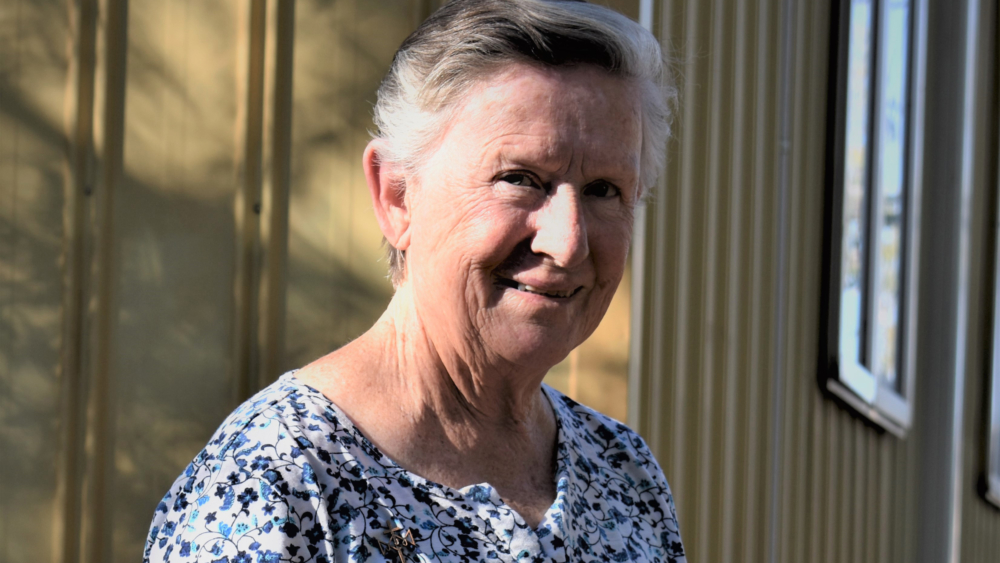 The 70-year-old nun who serves the outback

When most of us want to retire, a nun from Sydney chose to work in remote Western Australia to meet the needs of others doing it tough.

Sister Maureen Donnelly is a Josephite, the order of nuns founded by Mary McKillop. When I meet 70-year-old Donnelly, she is dressed in simple slacks and blouse which shows no hint of her importance in the community of Halls Creek. On the Great Northern Highway at the bottom of the Kimberley Region, Halls Creek is a 30-hour drive from Perth.

“I was very happy. It was life-giving to me.” – Maureen Donnelly

After obligatory introductions, Donnelly joins me on the ‘sit down’ couches at the back of her house. Couches which suggest many visits from the community who look for a bit of help or a chat.

She has a quiet, humble way about her and a small smile as she talks. We move our conversation to the local office shared by Centacare and Anglicare where community projects and aid are organised.

Donnelly joined the order in 1964, as a Registered Nurse at St Vincent’s in Sydney, then studied geriatric nursing in Melbourne, so she could work in aged care.

Her life, after the big city, took a huge change with 11-and-a-half fulfilling years at Wadeye in remote Northern Territory.

“Wadeye is 10 hours drive west of Katherine with around 3000 people, its own airport and had its own hospital which is now a clinic,” explains Donnelly. “The Timor Sea is just over there,” she says with a wave of her hand.

She ran the aged care facility along with HACC which she said was the best time of her life… “I was very happy. It was life-giving to me. I gained a lot of inspiration from the elderly. I had always wanted to work with indigenous people and even though this was a big leap to go from the big city to the top of Australia in one of the most remote areas, it was good for me.”

After she left Wadeye, Donnelly was assistant nurse coordinator for Jacobites in Queensland. At the age of 68, when most of us are retired or thinking about it, she thought: “I’m still good enough!” Donnelly asked to go back to Wadeye but there wasn’t an opening, so she called Sister Alma Cabassi who was stationed at Halls Creek.

She asked if there was anything to do there. “Yes! Please come as soon as possible!”

“We don’t run the shop for money but to meet needs.” – Maureen Donnelly

The two sisters together run a very busy Op Shop three days a week, just one street back from the Great Northern Highway. Many tourists pick up a bargain or drop off their used goods.

Donnelly’s time otherwise is taken up with visiting and volunteering at the local aged care facility run by the People’s Church.

I’m an avid op-shopper and prices are the cheapest I’ve seen. Donnelly comments: “Yes, life for people here is very trying; lives are hard. Food runs out after the first week of the Centrelink payments and so people have no money for essentials much of the time.”

The sisters make sure people have seasonal clothing and blankets, most sourced from the community or Vinnies in Broome, but some they buy from the chain stores in Darwin and Broome. In winter, it gets down to near freezing.

“We don’t run the shop for money but to meet needs,” stresses Donnelly.

While we talk, a young lady politely stands at the Centacare door, looking for something to eat. Donnelly finds her an apple, a juice box and a roll and tells her that’s all she has until next week. Donnelly comments that she comes in every day – with nothing to do and seemingly very lonely.

“These old people have so much to inspire us.” – Maureen Donnelly

Finally, I get around to asking the question I have been longing to ask: How do you maintain your faith in such a remote area?

“I live in community with Sister Alma and two others at the moment and we pray every morning, and hold mass at least three times a week.”

I had peeked through the front door of the church and seen just six seats set out in front of the altar. I wondered how I would go with such a small church family.

“I find the community supports each other here.”

Having been asked, in her work, what is her greatest joy, Donnelly doesn’t hesitate to say, “Definitely the old people. Feeding them, taking them for walks around the garden and chatting. We take them out once a week, outings like to the local school and to sights around. These old people have so much to inspire us.”

On the flip side of the greatest joy comes the reality of the sad side of life in Halls Creek. Donnelly’s face takes on a sadness as she looks into the distance, remembering.

She tells this story: “We had a lovely worker, who had done Certificate 3 down at the aged care home. He was a character with a great sense of humour and had a little girl. He was a good carer.  This day, he wanted some blankets washed and I said, ‘Look I’ll come to your place after work and get them and you can pick them up the next morning.’ So, when I went to pick up the blankets, he said ‘Sister, come in here!’ I thought it was strange that he was inviting me into his house (something that is not really done in indigenous circles). He’d got professional photos taken of himself, his child and his mother and sister. He was so proud of this group of family photos!”

“Anyway, he went off to Fitzroy Crossing and on a Saturday night, he got terribly drunk, lay down in the middle of the road and a truck ran over him and killed him. Everyone was devastated! He was such a lovely person.

“That sadness goes for all the young men and all the accidents that shouldn’t happen. Usually it is a result of drink. It takes so many lives. Work here is one step forward and two steps back,” she says pensively.

“I have to enjoy this beautiful country and be in touch with the world and my Creator.” – Maureen Donnelly

To make life good, Maureen is a solid part of her community. She enjoys going with friends on outings at sunset and to quiz night at the local pub. In a small group, her and friends go to each other’s place for dinner. “What is shared in our ‘Whine Wednesday’ stays there. That makes life good for me!”

“I have to live creatively. I have to enjoy this beautiful country and be in touch with the world and my Creator.”

The much-anticipated Australian Blessing video has just been released. And here at Eternity, we think…

With a huge smile, Rosemary serves refugee and migrant women

With a huge smile, Rosemary serves refugee and migrant women

Rosemary Kariuki is a one woman carnival of life. When Rosemary laughs – which she…