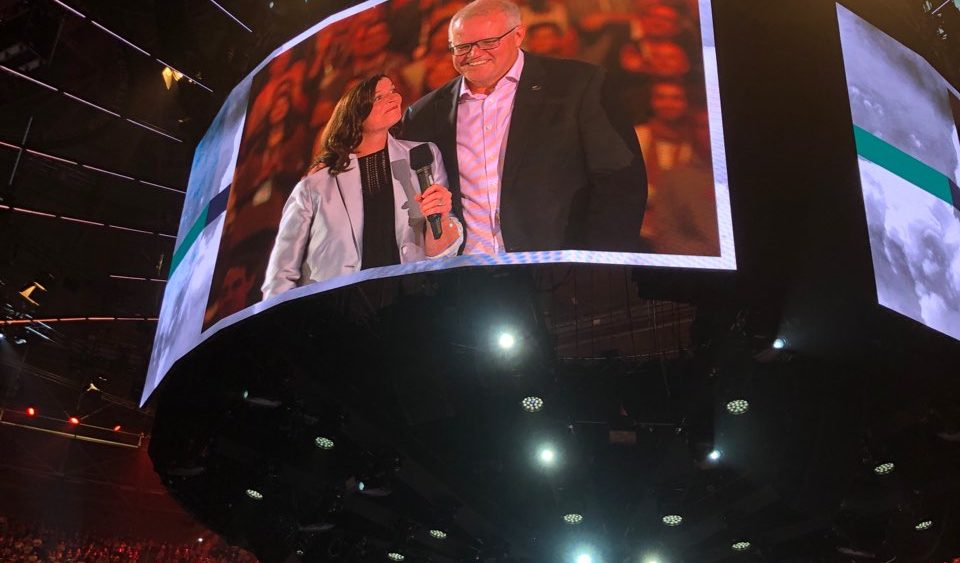 Prime Minister Scott Morrison prayed for Australia at the opening night of the Hillsong Conference tonight, telling the largest annual Christian gathering in the country that he believed religious freedom would be secured for Christians in the future but what Australia really needed was “more love”.

Hillsong founder and global senior pastor Brian Houston told conference delegates at Sydney’s Qudos Bank Arena that he couldn’t pass up the chance to have a Christian, charismatic, Pentecostal Prime Minister pray for the conference as he welcomed the Prime Minister and his wife Jenny on to the stage.

The Prime Minister told delegates the couple had been attending Hillsong Conference for many years and recalled a previous conference when Singaporean pastor Joseph Prince (who is a guest speaker again this year) had been preaching about how the disciple John referred to himself as “the one who God loved”, saying that it wasn’t a special title, but one that applied to all Christians. 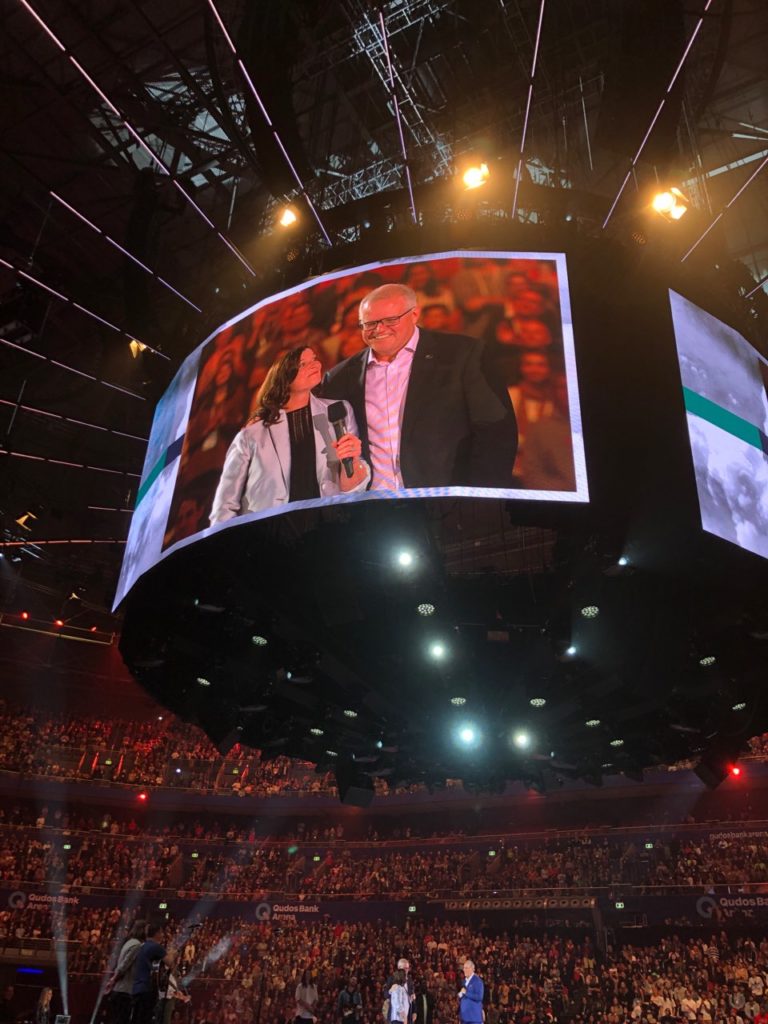 “My job is the same as yours: love God, love people. We’ve all got the same job,” he said.

The PM went on to pray for what he described as “some very important things”: veterans doing it tough; young people who are considering suicide; those facing the challenges of middle-age; remote Indigenous communities; people with disabilities; and for rain that would break the drought.

Asked how Christians could pray for him, the PM replied, “Firstly to pray! Our nation needs more prayer!”

“And humility of leadership, and the wisdom to see what He sees and to move towards that,” Morrison continued.

“And to have grace. Grace really is amazing,” he said, joining in the audience’s laughter and adding “Someone really should write a song about that!”

“There’s a lot of talk about freedoms as Christians in this country. Freedom of belief is fundamental in this country – whatever that belief might be. Whether you have one or you don’t!”

He recalled hearing stories of missionaries in Soviet Russia – Christians under persecution – saying “you didn’t hear stories about them complaining about their rights… They were just loving in that situation and they were out there for God. That was their response and this country needs more love and less judgment,” Morrison said.

Houston questioned whether the PM believes that religious freedoms for Christians would be secured for the future. Morrison said that he did, and that he’s always felt passionately about the subject.

“And of course we will do what we need to do from a legislative point of view.”

Jenny Morrison told the crowd “Nothing is impossible for God!” and joked “I didn’t choose this, Scott chose this and I chose Scott.”

Morrison has had a long association with Hillsong Church as a fellow Pentecostal, leading to widespread confusion amongst the general public (including mainstream media) about whether Morrison is a Hillsong attendee.

In fact, Morrison attends Horizon Church, which used to be called ‘Shire Live’ – a church led by Pastor Michael Murphy, who was once a pastor at Hillsong. But in 2008, Mr Morrison did pay tribute to Pastor Brian Houston when delivering his maiden speech in Australian Federal Parliament,

“Growing up in a Christian home, I made a commitment to my faith at an early age and have been greatly assisted by the pastoral work of many dedicated church leaders, in particular the Reverend Ray Green and pastors Brian Houston and Leigh Coleman,” Morrison said at the time.

The Hillsong Conference appearance is good timing for the PM who is in the process of drafting a Religious Freedom Bill amid a fierce public debate and who will be hoping to shore up the support of Christians.

So far, debate around the Bill has been around whether to support a “Religious Discrimination Bill” mirroring other anti-discrimination acts, or a tougher “Religious Freedom Bill” which would give extra protections for Christians.

Houston has previously offered a pragmatic approach to the hot-button issue, publishing an opinion piece in the Sydney Morning Herald entitled ‘A message to Folau: The world doesn’t need more judgmental Christians’.

“The problem with harsh comments in the media and disparaging statements on social media is that they create a further wedge between God and people,” wrote Houston.

“I like the idea of Christianity shorn of its medieval accretions. I like the idea of each believer reading the Bible and finding his or her path to individual salvation. I also like the spontaneity and informality of Hillsong’s worship. It’s actually very Australian,” Carr told the crowd.

Correction: A previous version of this article suggested former Horizon pastor Michael Murphy had planted the church he led when PM Scott Morrison was attending. In fact, it was Norman Armstrong who planted ShireLive, which is now called Horizon Church.

Or ‘Guess who’s not coming to dinner?’

J-Mo opens up her faith and family life

Nan, Mum and Sarah worship together and inspire each other