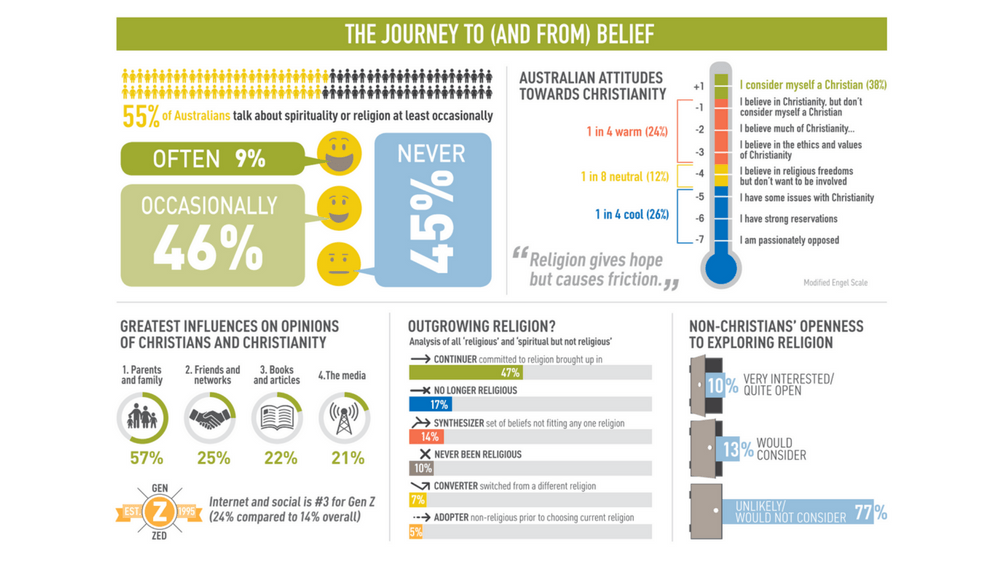 The journey to (and from) belief in Australia
McCrindle
Australia church

Results are in: Aussies admire people who live out a genuine faith

Three in four Aussies say that they are turned off investigating religion when they hear celebrities or public figures talk about their Christian faith, a new national study on religion and spirituality has found.

The results are part of the new Faith and Belief in Australia report, produced by McCrindle Research, in partnership with Olive Tree Media, Christian Media and Arts Association, Christian Schools Australia and the Ministry Training Strategy.

But sounding a note of hope, the greatest attraction to investigating spirituality and religion is seeing people live out a genuine faith.

Attractors and repellents to religion and spirituality in Australia McCrindle

These people believe there is an ultimate meaning and purpose (36 per cent), and follow an inward journey of self-discovery (26 per cent). 22 per cent believe in a mixture of different religious beliefs.

“Negative feelings come from things that happened inside the church or things like that. Maybe try to push the Jesus thing, rather than the ‘come to church and learn about Jesus’ thing.” – Gen Y participant

A recent Barna study also explored the identity of those who consider themselves “spiritual but not religious.” (Barna are a market research firm specialising in studying the religious beliefs and behavior of Americans, and the intersection of faith and culture).

“But straying from orthodoxy is not the story here. This feels expected. Sure, their God is more abstract than embodied, more likely to occupy minds than the heavens and the earth.

“But what’s noteworthy is that what counts as ‘God’ for the spiritual but not religious is contested among them, and that’s probably just the way they like it. Valuing the freedom to define their own spirituality is what characterises this segment,” says the Barna study. 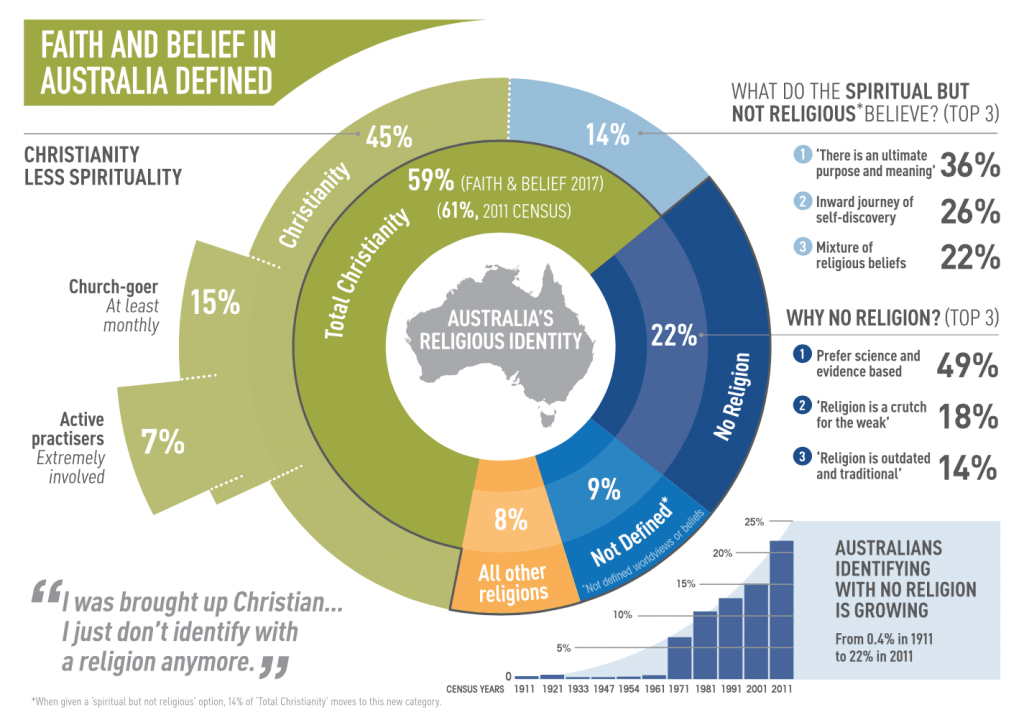 Faith and belief in Australia McCrindle

More than half of Australians (52 per cent) say they are open to changing their views given the right circumstance and evidence. But this number drops dramatically to just 12 per cent, when we look at those people who are “very interested” or “quite open” to changing their current religious views.

One Gen Y non-Christian participant said, “I swap day to day, week to week, year to year. Sometimes it might be work related, or personal… when something isn’t going right and I want to go towards a positive path. I think a lot of other people my age do the same.

In a country where 45 per cent of adults never talk about religion, it is perhaps surprising that the most common reason that people are prompted to think about spiritual or religious things is through conversations with people.

Baby boomers (born 1946-1964) are the only group to buck this trend, with global/national issues and a death in the family being more likely to prompt spiritual thinking.

Gen Z (born 1995-2009) are the only generation to be significantly impacted by social media when it comes to thinking about spirituality and religion (32 per cent say it is their most significant source of spiritual thinking).

Top 5 prompts for thinking about spiritual or religious things McCrindle

92 per cent of Aussies know at least one Christian (with 46 per cent saying they know over 11 Christians). But that also means that almost 1.5 million Australians don’t know any Christians, with one in 10 Gen Y not knowing any Christians.

But Christians were also described as hypocritical (17 per cent), opinionated (18 per cent), judgemental (20 per cent), intolerant (12 per cent) and rude (four per cent). 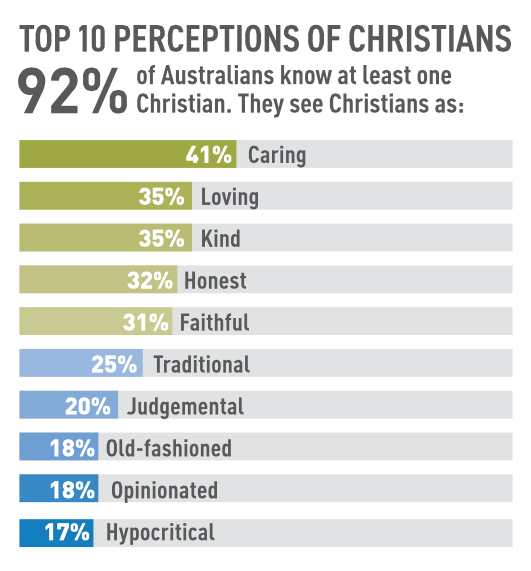 The report divides belief blockers (those things that would stop non-Christians “open to change” from exploring Christianity) into behaviours and issues.

Unsurprisingly, 73 per cent of people say that sexual abuse of children within the church and other scandals are either a massive or a significant negative influence on peoples’ perceptions of Christians and Christianity.

10 per cent of people say that the reliability and validity of the Bible would “completely engage” their interest in Christianity.

When it comes to issues, the major issue blocking peoples’ interest and engagement with Christianity is homosexuality, with 67 per cent of people saying that this would either completely, significantly or slightly block their interest.

One in four people cent identify suffering as their “belief blocker” while 28 per cent of people say that hell and condemnation would completely block their interest in Christianity.

On the plus side, 10 per cent of people say that the reliability and validity of the Bible would “completely engage” their interest in Christianity.

One non-Christian Gen Y participant said, “negative feelings come from things that happened inside the church or things like that. Maybe try to push the Jesus thing, rather than the ‘come to church and learn about Jesus’ thing.”

When it comes to religion in schools, 44 per cent of parents with children at government schools think it is appropriate to talk about spirituality and religion at school. 31 per cent think it is inappropriate.

When asked about the appropriateness of discussing religion at university, Christian school parents thought it was an entirely appropriate forum for the topic (70 per cent), but government school parents were more likely to disagree (41 per cent).

This report follows on from the Australian Communities Report released in late 2011. Karl Faase, CEO of Olive Tree Media says, “the unintended outcome was that the paper was used widely in the Australian church. Church and ministry leaders found this research very helpful to understand the communities response to the Christianity and the church.

“In 2016 several ministry leaders approached Olive Tree Media and suggested that after five years it would be helpful to repeat the research to look at trends in the community as well as seeking responses for new areas such as the communities views on faith in schools and the churches social licence. A partnership between Olive Tree Media, CMAA, Titus Foundation, Ministry Training scheme & Christian Schools Australia have supported this new research carried out by McCrindle Research.”

Faith and Belief in Australia

Faith and Belief in Australia

Christian belief splinters in the US and UK